UVM to name all the student sections 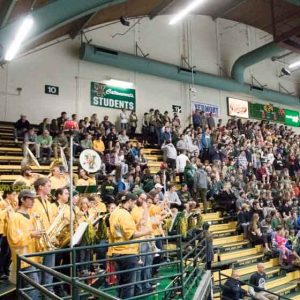 In an effort to increase student interest, the UVM athletic department has announced they will be naming the student section in all of its sports facilities.

Nora King ‘16, director of fan engagement, is collaborating with SGA on the project, King said.

It has been decided that the UVM community will choose the name for the student section.

In order to get students engaged, UVM athletics will be taking suggestions and sponsoring a vote to determine what the name of the student section will be.

As of Oct. 10, students can submit name ideas to [email protected], according to King.

Submissions will be accepted until Oct. 23.

At this point, UVM athletics staff will choose five of the submissions to be voted on.

The voting poll will be located on the homepage of student accounts at myuvm.uvm.edu, and will open Oct. 28.

The votes will be tallied Nov. 3.

At that point, the winning name will be selected as the official title of each student section at UVM’s athletic facilities.

The new name of the student sections will be unveiled at the men’s hockey game against Boston University Dec. 9, King said.

Prior to the game, UVM athletics will be sponsoring a tailgate.

The first 500 students in attendance will receive a free t-shirt displaying the new chosen name.

In addition, the student who submitted the winning name will receive a prize for their efforts.

An official UVM hockey jersey and two tickets to every home hockey game will be presented to the victorious student.

“The idea is to have a name that not only applies to the actual space of the section, but refers to the group of students as well,” King said.

King said that by naming the student section, fans will have something to rally around and the in-game atmosphere will be improved.

“My hope is that by naming the student sections, we can create more unity amongst the students, and give everyone something to bond over,” she said.

“In addition, our aim is to create more of a buzz at the games and create a more exciting atmosphere for the fans and players alike.”

King said she hopes naming the student section will elicit more energy, cheers and chants from the fans.

UVM athletics has also recently introduced a “student group of the game”.

Each home hockey and basketball game will feature a club or organization from the UVM community.

This will encourage a diverse group of students to attend athletic events, King said.

It will also enlighten students as to the huge variety of student groups on campus, according to King.

The Vermont Army National Guard is the presenting sponsor for the naming of the student sections.