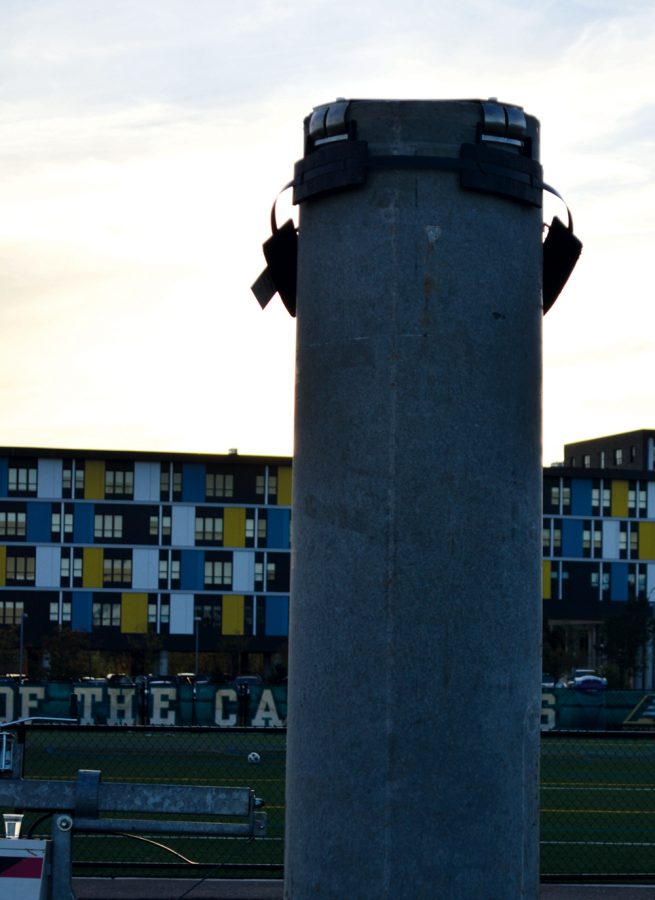 The new lights being constructed at Virtue Field are pictured Oct. 4. Virtue Field has been without a permanent set of stadium lights since 2012. DAYNA WYCKOFF/The Vermont Cynic

The wait is over for the UVM community and Vermont residents who have waited for the installation of Virtue Field’s stadium lights to begin.

Since its construction in 2012, Virtue Field has been without a permanent set of stadium lights which has limited the amount of practices and games played.  The athletic department has been aware of this issue  and has spent the last few years planning its additions.

UVM is now the last America East team to install stadium lights on a lacrosse or soccer field.

“The lights will serve the needs for four varsity programs,” Schulman said. “They are a great asset to campus and student body at large.”

The installation of these stadium lights marks the first completed element of Phase II, which encompasses developing Virtue Field and its amenities.

“After the installation charges are incurred, the lights cost approximately $500,000,” Schulman said.

The investment for these lights is just one piece of the Phase II construction process.

“For Phase II as a whole, the remaining cost of the project totals about $3 million, which includes the $500,000 investment for the stadium lights,” Schulman said.

The athletic department is fundraising to help fund the rest of Phase II.

“The goal is to get a substantial part of that fundraising done this summer,” Schulman said. “We’re speaking with individuals who have a variety of connections to the university and recognize the impact that this type of facility will have on the experiences of UVM students now and well into the future.”

Phase II is the second phase of development at Virtue Field, the first being the donation of Virtue Field from Ted and Dani Virtue.

“After a three-year permitting process by the city of South Burlington and state of Vermont, we are excited to say that we can move on with the project,” Schulman said. “People planning to use Virtue Field lights are able to use them until 11 p.m. on a daily basis, per agreement with South Burlington.”

For Schulman and the rest of the athletic department, these lights serve as a reminder of hard work and upward momentum for UVM as a whole.

“We think that the ability to have night games will help us with attracting larger crowds, offering more convenient times for students and also the community,” Schulman said.

“Night games will now be something to do for most students who are interested in supporting UVM’s teams,” Bernier  said.