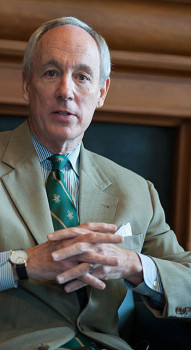 The UVM athletic advisory board voted “no” despite the recent NCAA autonomy ruling, where it was officially put into effect at a convention in Washington, D.C. this past January.

In August 2014, the NCAA Division I board of directors voted 2-1 to allow the schools in the top-five conferences to legislate their own set of rules within their athletic programs.

The top 64 schools elected amongst these five conferences have been dubbed the “Power Five”. These schools are seen as consistent contenders who are most financially fit to handle such measures.

There has been much controversy and tension amidst the remaining 285 schools who have been excluded from the provision, President Tom Sullivan said.

The issue is that the NCAA has created a divide with the monopoly of these top-five conferences. The remaining schools are at a disadvantage in terms of recruiting future athletes.

Sullivan said UVM was one of the 27 institutions across the country that opposed the ruling and voted to reject the council’s terms and conditions.

The reason UVM declined the autonomy proposal was based upon three consequences that conflicted with our code of ethics: the inflation of athletic team costs, anti-trust issues and the cost of student athletes becoming commercialized, Sullivan said.

“The more compensation that is given to the players, beyond full cost of attendance, it becomes a compensation package. Much of which has nothing to do with the education of that student,” Sullivan said.

He said he believes the current focus of college athletics is not involved enough in academics.

“It looks more like employer and employee than faculty and student relationship,” Sullivan said.

UVM’s faculty and staff continue to insist that the classroom is more important than what happens on the field.

Some larger schools tend to invest more in one sport at the expense of others. This creates a financial problem because smaller schools are going to have to cut their lower profile, non-revenue sports to maintain their budgets and keep up with their fellow competitors, said Dr. Robert Corran, director of athletics.

“The primary purpose of an educational experience for our student-athletes is really what our program is based on and most interested in ensuring that continues,” Corran said. “If we could rule the world, we like it the way it is.”