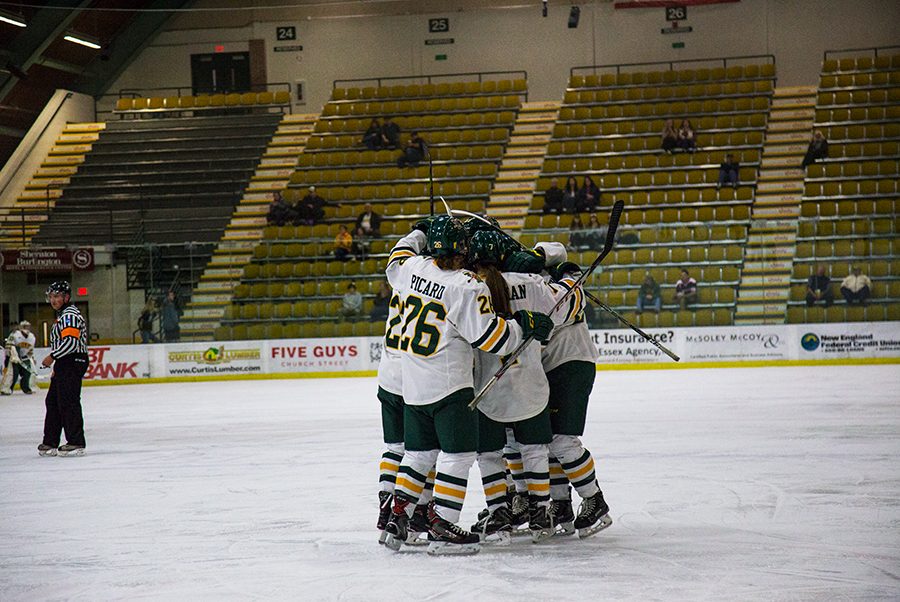 The women's hockey team celebrates a goal against the University of New Hampshire Oct. 10. The Catamounts hold a 5-12-3 record.

The Vermont women’s hockey team fell in their last game this semester, extending their winless streak to eight.

The Catamounts were defeated 4-1 by the Maine Black Bears Dec. 9 at Gutterson Fieldhouse.

Maine opened the scoring late in the first period.

Sophomore goaltender Sydney Scobee made a pad save on Brooke Stacey’s shot, but senior defender Amanda Drobot was unable to clear the puck quickly enough.

Catherine Tufts poked the goal home with just 1:20 to go in the opening period.

Vermont thought they’d had the tying goal early in the first on a power play, as senior defender Taylor Willard took a shot that passed Maine goaltender Carly Jackson.

The puck hit the goalpost, and UVM celebrated thinking they’d leveled the score. The referee ruled no goal, and a video review confirmed the call.

UVM tied the game moments later on that very power play. Willard’s shot from the point beat Jackson to tie the game at one.

Maine went ahead again late in the period. Brooke Stacey’s initial shot was blocked by Willard, but Stacey quickly got the puck back and buried the rebound.

Maine doubled their lead less than a minute later, as Maine’s Daria Tereshkina buried a rebound on a cross-ice feed from Stacey to extend the lead to 3-1.

The Black Bears made it 4-1 early in the third period, with Lydia Murray converting on a backdoor pass from Tufts.

Scobee made 27 saves in the defeat, while Jackson made 28 for the visitors.

Vermont does not play another NCAA game until Jan. 6 against Providence College. Head coach Jim Plumer believes this break is coming at a good time.

Plumer believes the recent shaky form is more of an issue of confidence than a physical one.

“It’s more mental than physical at this point,” he said. “I think that feeds into ‘Do I try too hard? Am I not trying hard enough?’ and it becomes a bit of a snowball.”

Vermont’s next game will be at the Theresa Humes Invitational in Montreal over the weekend of Dec. 30.