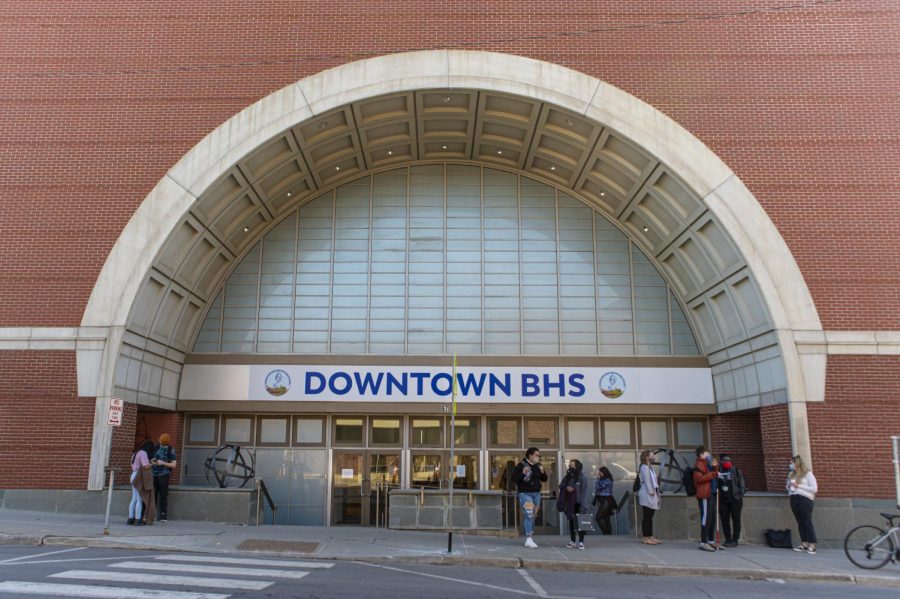 Students wait to be picked up after their last class of the day gets out March 16.

The escalators inside the once-abandoned Macys are up and running again, but instead of transporting shoppers, they are helping students get to their classes on time.

In August of 2020, Burlington High School students were prepared to start in-person classes after months of quarantine.

But, after the school found dangerously high levels of Polychlorinated biphenyls (PCBs) in old construction materials, students were forced to go back to remote learning in September.

Tom Flanagan, the superintendent of the Burlington school district spent months looking at a variety of locations for the school to relocate to for in-person learning.

“We looked at 15 to 20 sites around town, anywhere from, movie theaters to hockey rinks to Hannaford, all kinds of spaces that were not in use,” Flanagan said.

The final decision came down to either using trailers or moving into the unoccupied Macy’s building in downtown Burlington. Flanagan ultimately decided on Macy’s because it was cheaper than renting multiple trailers and setting them up for a learning environment.

The Macy’s building provides a better sense of community for the high schoolers than the old building did since the old school was a series of buildings connected with tunnels, Flanagan said.

“Just to be able to provide that sense of community to your friends and your teachers and your school counselors and all the administrators and all the support staff and just knowing that you’re a part of a community again was huge,” Flanagan said.

Students also enjoy being able to walk to Church street once their classes get out.

As students moved from class to class, they giggled and chatted with one another in the halls; staff exchanged elbow bumps and jokes. Despite the location, the sounds and sites of highschool bounced off former display cases and the few remaining clothing brand advertisements on the walls.