Fact check: This is what UVM is feeding students for dinner, and all other meals, in quarantine 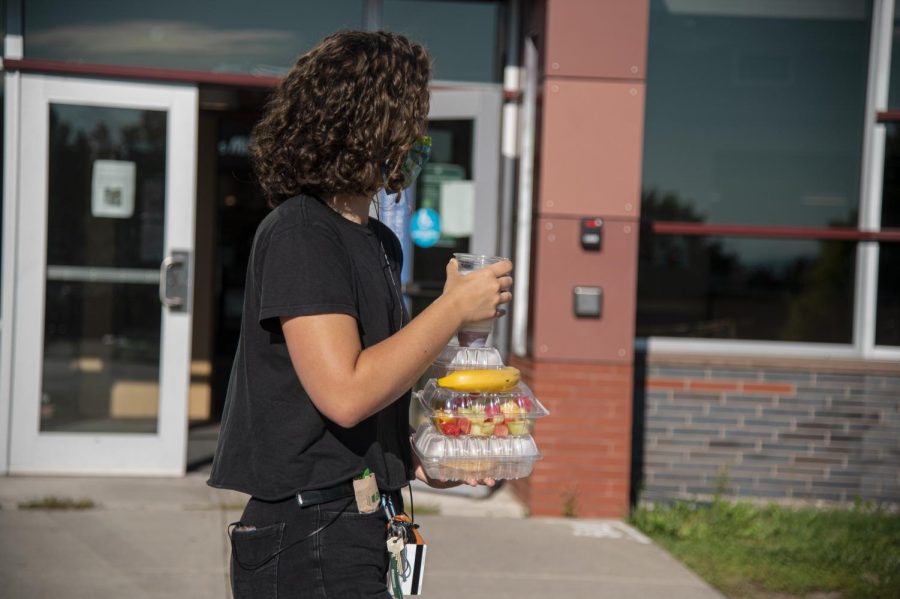 A UVM student in quarantine leaves the dining hall during the breakfast hours with copious amounts of food Aug 20.

A UVM Union of Students’ Instagram post of a half-eaten sandwich, six french fries and a spoonful of vegetables, was removed after students called out the group for presenting “misinformation.”

The Union posted the picture late Tuesday night on their Instagram page and on Facebook with a description that claimed the food presented in the post was all students who are on campus are given for their meals.

“This is what UVM is feeding students for dinner in quarantine,” the post said.

In the caption of the post, the group called on the University to “fix” the food available to students on campus who are currently quarantining.

The post was made on Aug. 18, which was the first day all current on-campus students could eat in Harris Millis, the only dining hall open to students until classes begin.

Eleven students commented on the post including Sophomore Ruth Oppenheimer, who said in the comments that the post was misleading.

“As somebody who’s actually in quarantine [on campus] I can confidently say that this post is super misleading,” Oppenheimer said. “I have been receiving huge positions, healthy, filling meals, and ample options.”

Sophomore Chris Harrell, an executive of the Union said the Union stands by the post.

“I want to be very clear that we did not spread any misinformation, and we don’t consider ourselves to have spread misinformation,” Harrell said. “We think that the post has no inadequate information.”

Harrell said that the Union typically tries to investigate everything to the fullest extent possible but they believed the information needed to be put on social media.

“In this instance, we received this tip and we felt that it was really urgent to get that out and to see if other students are having the same experience,” Harrell said.

Sophomore Emily Collins, an RA in Tupper Hall,  said she’s been living on campus since Aug. 8 and the food quality is not any lower than last semester.

Collins also said she’s been a supporter of the Union of Students from the start, but recently the Union has begun to lose her trust.

“Now that I see them posting information that they really don’t know about, and they’re not willing to delete it, or actually engage with people who are trying to correct them, that personally discredits the Union in my eyes,” she said.

As a vegetarian Collins said that she has had no trouble finding the food she needs, the dining hall always has two different vegetarian options, one at the regular station and one at the simple serving station.

“I know that the people who run the Student Union page, neither of them are on campus and that they don’t even have experience with the dining hall so…they were definitely making a bigger deal out of something than they needed to be,” Collins said.

Rowen Carrick, a Sophomore who is also on-campus said the Union should have done more to confirm the information by reaching out to other students who are on campus.

“It’s like they’re trying to poke flaws in something that hasn’t been bad,” Carrick said. “I mean, the dining staff is so amazing and they really are risking their lives as essential workers to service food and cook us all of these meals.”

The Union posted a new image stating the removal of the previous post about the quarantine meals was because they received constructive input from other students sharing experiences that did not align with those of the anonymous student.

The post continued to redirect it’s viewers to the Union’s commitment to fighting injustice from the administration but made no mention of “misleading,” information.

“We stand in solidarity with students, faculty and staff in the fight for social and racial justice at UVM,” the post stated.

The Union of Students recently sent the university a list of demands regarding the “unsafe reopening plan,” that they claim “will kill students.” They have given the administration one week to respond.