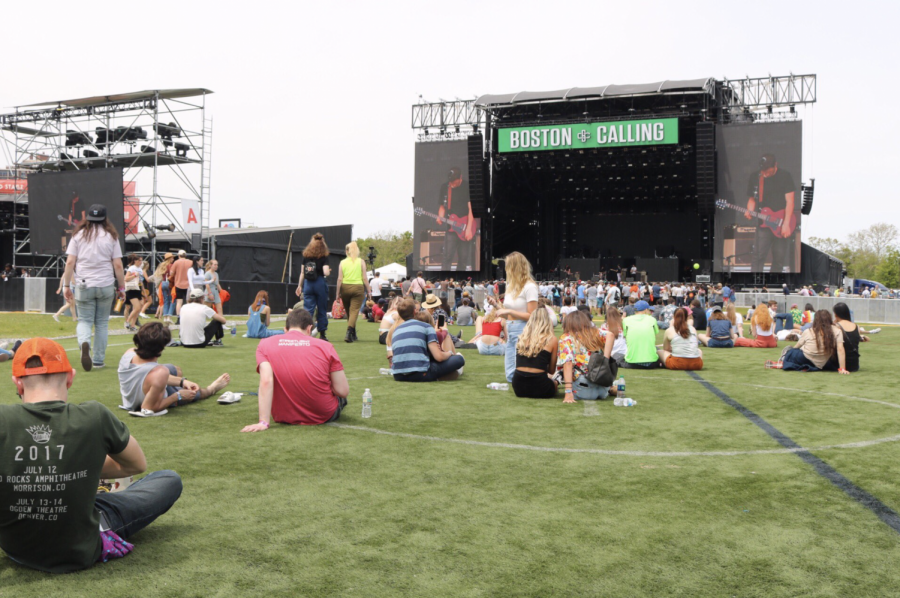 During the school year, Harvard University, one of the United States’ most prestigious universities, fills its hallways and sidewalks with students ready to learn, party or both.

When school lets out for summer, the Harvard University athletic complex fills with eager festival goers to enjoy music, comedy, booze and the newly arrived summer weather. From May 24 to 26, 2019, the Boston Calling music festival celebrated its 10th anniversary with big headliners and comedy acts.

The festival featured 30 different local food vendors, providing hungry attendees with more than enough dining options to fuel themselves for the three-day festival.

Friday’s weather was pleasant but overcast, allowing festival-goers to enjoy dancing and moshing without fear of heat exhaustion or sunburn.

While there weren’t any bands performing Friday that I was dying to see, my favorite comedian Fred Armisen was set to perform in the indoor portion of the festival.

We came in to the Arena where the tables had been set up like a typical comedy club. Comedian Sam Jay was cracking jokes about lesbianism and Blackfish before the Portlandia and SNL star took the stage.

After seeing the release of his newest Netflix special “Stand Up for Drummers,” I was expecting to hear some of the same jokes. However, I was quickly proven wrong. Almost all of his set consisted of new niche musician jokes that me belly laugh for the entire performance. Probably the most exciting part of the festival for me was getting to meet Armisen after the show.

Now on a high after getting to chat with one of my icons, we took a minute to plan out the rest of the night at the festival.

After feeding the parking meter, we re-entered the festival to hear thudding electronic music and French lyrics. Christine and the Queens was on the tail end of her set. We watched as Héloïse Letissier’s body twisted and danced in ways that synced up perfectly with her music. I love performers who truly put their whole bodies into their act.

The last band we went to see was the Irish band Chvrches, who were filling in for Janelle Monae. Though I didn’t know any Chvrches songs, I realized how much I love watching others enjoy music that clearly means a lot to them.

Watching a crowd of hundreds of people from all walks of life completely lose their inhibitions reminds you that besides the superficiality of festival-fashion and overpriced beer, festivals are truly created to be judgement-free. You can move how you want, sing as badly and loudly as possible — and these things only add to the experience.

“Boston’s a really great town for shows, so thank you all for being here,” lead singer Lauren Mayberry said.

By the end of their set, we were wiped and headed back to our Airbnb in Arlington, a short drive from Cambridge.

Side bar: As two reporters on a budget, my partner and I settled on the cheapest Airbnb we could find. What we didn’t know was that the home we stayed in for two nights was a sprawling and absolutely gorgeous historical home in suburban Boston.

According to Jess and Matt, the house belonged to an ice salesman long ago, and we oohed and ahhed our way through the tour. A huge shout-out to Jess and Matt for allowing us into their lovely home.

Saturday was looking to be the most exciting day of the festival. My personal favorite musician, Mitski, was set to perform and I was extremely excited to see her for a third time.

With several hours to kill, we rushed to see rapper Princess Nokia perform at the Delta Blue stage. Nokia brought a show that was energetic and impossible not to bop to.

We sat on the lawn and enjoyed the sunny weather as we watched Boston-local Clairo perform. “I’ve been going to Boston Calling since it started, so it’s really lovely to be able to perform here,” the young artist said.

The crowds were noticeably larger on Saturday than Friday, and crowds for headliner Tame Impala started lining up as soon as Clairo’s set ended. There were still several hours to go before Tame Impala performed, speaking to the popularity of the Australian band.

Mitski’s set was incredible, as always. She remarked on how she wished that we could be closer to her. With her rhythmic dance routine, the set felt like a full performance rather than just a concert. While some new to Mitski might find her style strange, “That’s just the vibe here,” Mitski said in between songs.

While waiting in line for overpriced ice cream, we chatted with some of the lovely and inebriated folks in front of us, one of whom was desperately trying to get us to see the drum line/EDM group Odesza.

“I know you’ll go to see Hozier, or Tame Impala or whatever, but I just want you to consider seeing Odesza,” the nameless man said more than once.

Hip-hop fusion group Anderson .Paak & The Free Nationals put on easily one of the best shows of the entire festival. Complete with pyrotechnics and a full band, the entire crowd seemed to be moving in rhythm with the undeniably fun band.

The cherry on top however, was the surprise performance of Lil Nas X, Twitter and Tik Tok sensation who sings “Old Town Road.” It’s safe to say that the majority of the crowd was screaming the lyrics so loud it was almost impossible to hear the 20 year-old viral country-rapper. Even my mom was jealous that I got to see him live.

.Paak finished their set with a tribute to the late rapper Mac Miller, which was met with cries of both excitement and grief from the audience.

As the sun set, temperatures started to drop and the vibe had settled down. We ambled over to watch Hozier, of whom I know only “Take Me to Church,” before catching our breath to jam and jump to Tame Impala.

While we missed the final day of performances, my experience at Boston Calling felt totally complete. I had met a hero of mine, seen my favorite artist, but also discovered music that I wouldn’t have found on my own.

It’s easy to think that we as music lovers have heard everything and know what we’re talking about when it comes to good and bad music.

However, sometimes it takes seeing the artist live — breathing their air, seeing their years of hard work come to fruition — that makes music “good” music.

Even if it wasn’t my personal taste, every group had at least one member of the audience screaming every lyric. And I think that’s a special thing to see.