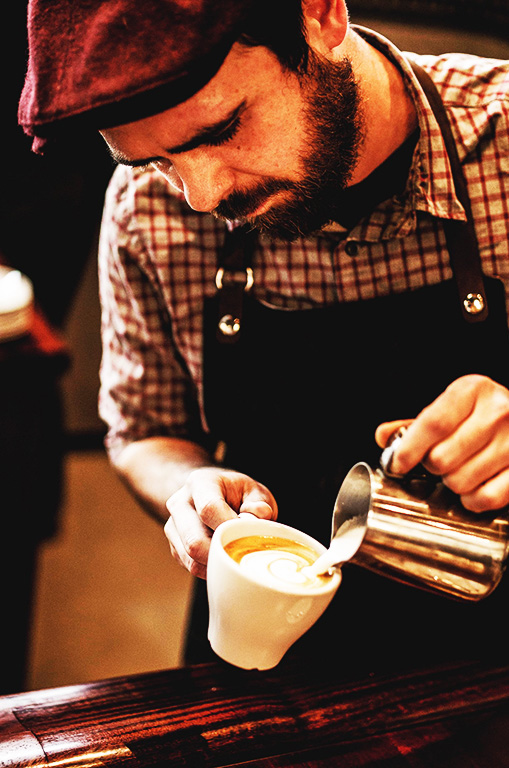 Although the intricate designs don’t last long, they are compelling and deemed Instagram-worthy.

I attended the Latte Art Throwdown Feb. 25 to answer these questions and to meet the Burlington coffee community.

Baristas entered the competition at the Great Northern, a restaurant, for $5, and competed against each other to test their skills in latte art creation.

The dim lights, angular couch and wooden fireplace inside the restaurant created a sense of comfort and familiarity. The free coffee offered during the event didn’t hurt either.

One of the judges, Rob Maynard, said he looks for consistency and creativity in latte art.

“The ability to design a series and use symmetry or asymmetry with signs on the side,” Maynard said. “It’s about the control of pour and creative ability.”

Maynard has been involved in the coffee community for a long time.

“I’ve been working with coffee for about six and a half years and competing for maybe three to four years, intermittently,” he said. “The camaraderie is very cool.”

People buzzed around as the event was announced to begin.

“Art is about working with the right materials: espresso syrup and milk that has the consistency of wet paint,” said one of the event’s competitors. “It uses fluid dynamics to make marks appear.”

The competitor said his favorite design is a smiley face.

Two people competed in front of three judges at a small counter. The competition was broadcast to the large crowd of people gathered in the restaurant.

The competition was fast-paced. The contestants took around three minutes to make the latte, top it with a design and set it onto the table.

After a few seconds, the judges pointed to the winning cup. Soon after, the next pair began to battle.

The latte art was fleeting, as the lattes were handed out to members of the crowd.

It is the latte’s temporary nature makes it more appealing, said Tiffany Farrant-Gonzalez, co-owner of Onyx Tonics on College Street.

“I like it’s fleetingness. Customers like to take picture, mix it around and then it’s gone,” Farrant-Gonzalez said. “You’re never going to get the same latte art again.”