Perspectives: Structural changes are needed to save UVM programs 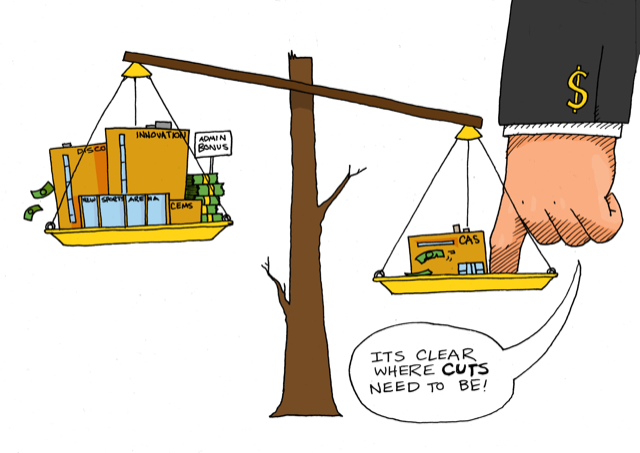 The recent cuts to undergraduate and graduate programs should come as no surprise. These programs are not the first ones seeing cuts, and likely will not be the last unless serious changes are made to the higher education system. They are just a symptom of the illness of the costs of higher education. Even before the pandemic, running a University has been a losing business, almost never creating a profit. This fall alone Ohio Wesleyan University cut 18 majors, University of South Florida cut all undergraduate education programs, and Harvard, Princeton and UC Berkeley have all stopped taking new Ph.D. students.
But COVID-19 is not the only cause of this crisis in higher education. This crisis at UVM and nationwide comes down to too many factors. Many of which are exacerbated here in Vermont. But for this column (and for the sake of word count), I will focus on just the decline in state financial support.
Hesitance in the last decade of state government support for higher education has pushed costs onto students making it harder to enroll and graduate in many schools. Here in Vermont the state spending towards higher education has only increased 4.3% since 2010, even as enrollment has grown. In 2019, state appropriations made up only 11% of the general fund budget (supports academic, administrative, and department operations). Meanwhile out of state student tuition paid for a smidge over 50% of it. Compared to other states, Vermont often ranks last in amount given to higher education. In 2017, the state gave $2,695 per student, meanwhile nationwide the average was $7,000 per student. Although this problem is not unique to Vermont, it is exacerbated by Vermont’s situation. A small population, with a small tax income of course leads to less money and in the end, cuts to higher education first. So UVM is forced to look for income in other ways, including enrolling more students, and raising the costs of attendance. With the recent tuition freeze and higher spending costs of COVID (testing, contact tracing, online software), things have gotten even more complicated, leading to cuts to programs that are unprofitable. The state has left UVM to fail and we are seeing its effects.
How can we move forward before more programs are cut and probably more colleges close? We will need structural changes. First, more money is needed from state and federal governments. It is simple, more funding equals a more secure source of income. Universities have tried for decades to make up these costs, including increasing non-tenure track faculty and an increase in interdisciplinary programs (hello Health & Society). Another solution is to set tuition at free for public colleges. Free tuition would force federal and state governments to work together to make it possible. The federal government would also need to cut the use of public money towards private schools. Schools like Stanford and Princeton get thousands of dollars per student in federal money. But none of this is possible without a necessary debate about the mission of higher education. Something that has been lacking in recent years.
Higher Education is in a grim situation. Soon it will continue to grow out of reach for many more students, leading to even more inequalities. Here at UVM, more low enrollment programs will be cut or merged. This is just the beginning unless structural changes are made.