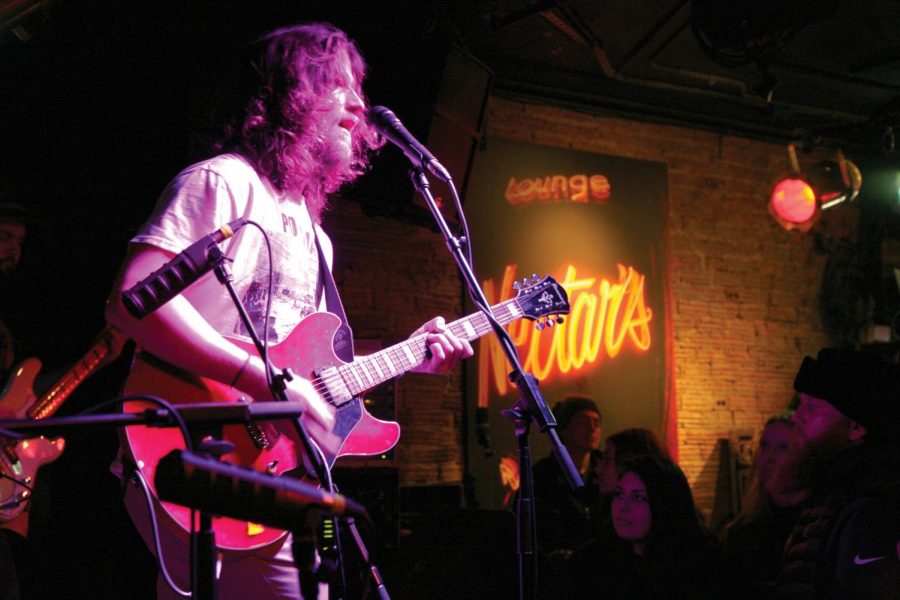 The band Adventure Dog performs at the UVM Program Board Battle of the Bands March 24.

Rapper Playboi Carti will headline SpringFest, according to UPB’s announcement at Battle of the Bands March 24. UPB did not reveal to the winner of the event due to time constraints.

“We were told we had to clear out of Nectar’s, and didn’t have time to make a clear decision,” said sophomore Taylor Magda, a UPB concert committee chair.

Battle of the Bands, a competition hosted by UPB, gives local student bands an opportunity to showcase their talent to the community. At least one member from every band must be a UVM student, according to UPB’s website.

Musical acts Princess Nostalgia, Adventure Dog, Guest Policy and Recess Radio competed to determine who would be the opener for Playboi Carti, an American rapper.

Carti’s fame took off after the release of his infectious bop “Magnolia,” a song inspired by the “Milly Rock” dance craze.

Battle of the Bands had its first round of competition last week. The preliminary rounds featured many bands, but only four acts advanced to the final round.

Three of the advancements were determined by a UPB committee, but the fourth, Recess Radio, was chosen by a crowd vote, Magda said.

In the final round, Magda said, a UPB committee scored the bands on a scale of one to ten in three categories: crowd reaction, stage presence and musicianship. Audience members were not given a chance to vote.

“There was so much talent … we wanted to take the time to deliberate,” Magda said.

At Nectar’s, the crowd buzzed with anticipation. People chattered and mingled as they waited for Princess Nostalgia to begin her set.

Sophomore Lili Traviato, who performs under the stage name Princess Nostalgia, has been a musician since third grade, she said.

She described her beats and vocals as R&B/electronic with “a little bit of funk.”

“Nectar’s was an awesome environment and UVM as a whole was so supportive. Couldn’t have asked for a better turn out,” Foster said.

Nectar’s was the perfect venue to have an intimate experience with the artists, first year Jake Pezzulo said.

“[Battle of the Bands] is a great way to showcase the talent of the students. I liked Nectar’s — I’ve never been here before and it has a great ambiance,” Pezzulo said.

“It was a lot of fun to see so much excitement for live music in so many forms,” Tonra said. “We were glad to be a part of it.”

As a saxophone blared, the group’s wild, funky jams brought the crowd together,

Magda said that the concert committee would meet March 26 to discuss the winner, and planned to announce later in the week.

Springfest is one of UPB’s biggest events, and will take place April 28 at 1:30 p.m. in Jeffords Parking Lot.

SGA is reconsidering annual funding — a $50,000 grant towards any aspect of Springfest — it has been supplying to UPB for the yearly event, SGA President Chris Petrillo said.

“It has become apparent that we are relatively underfunded [compared to these schools],” he said “The majority of these other schools do source their funding from their respective SGAs.”