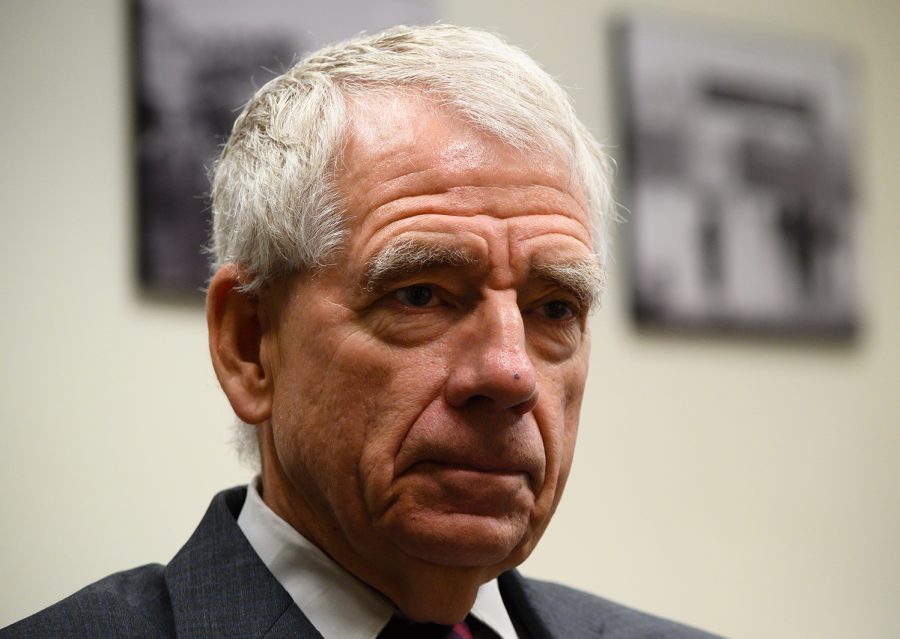 Richard Cate, University treasurer and vice president for finance, sits in his office, Sept. 26. Cate was tasked to handle all sustainability and climate action issues by President Suresh Garimella at the beginning of September.

In a tense Staff Council meeting, UVM’s vice president of finance was accused of defending a racist system after steering away from questions regarding race at UVM.

The June 9 meeting was meant to discuss the latest round of budget cuts announced in a June 4 email. It was attended by 250 people via Microsoft Teams, where UVM staff pressed VP of Finance Richard Cate to answer questions about racial justice issues.

After one member asked why the administration sent this memo during a series of heightened racial protests, Cate said the email was not intended to harm people.

“I’m truly sorry that this had a negative impact on people of all races,” he said. “These budget cuts were not based on anything other than salary.”

Cate said the memo was not targeted at black faculty, and that if the memo was released later, racial issues would still be a prominent topic of discussion. The administration felt that sending the memo sooner rather than later was better, he said.

Jenna Emerson, outreach programmer for the Center of Health and Wellbeing, spoke up and said Cate’s words were racist.

“What you’re saying is extremely racist in an ‘All Lives Matter’ kind of way,” Emerson said. “We want you to recognize the impact that your memo could have on people who are not rich, who are people of color and who are black folks in our community.”

“This memo was set to go out at that time for a while,” Cate said. “It’s unfortunate that other stressful circumstances were occurring that week, but there was no good time to release this.”

Cate said that he did not agree with Emerson, but “was not going to debate it.”

“You certainly have a right to your own opinion,” Cate said.

Thirteen seconds of unbroken silence followed this response from Cate before the topic of conversation moved away from race.

In a statement to the Cynic, Emerson said Cate’s response implied a lack of understanding in the role race plays in working at UVM.

“When Cate claimed that all races are experiencing cuts… he dismissed the fact that staff of color are being exploited for additional labor and didn’t acknowledge existing racial disparities in salaries and positions in the university,” Emerson said.

Cate does not wish to engage further, according to an email sent to the Cynic Tuesday evening from UVM Spokesperson Enrique Corredera.

Staff Council meets once a month and was created to give staff a voice in the decision-making processes of the university.

The Council is tasked with listening and responding to staff ideas and opinions and relaying them to the administration, according to the staff council webpage.

Cate and Emerson’s comments came towards the end of the meeting, when Sandra Bermanzohn, business office analyst for the College of Arts and Sciences, asked the moderator to address staff questions coming up in the Teams chat regarding racial issues at UVM.

“The questions are coming very often and they’re being ignored,” Bermanzohn said.

Bermanzohn also offered to help locate the race-related questions in the chat if Caleb Gilbert, staff council vice president and moderator for the meeting, couldn’t find any.

“I have seen the questions. I appreciate them, I find them really interesting and some of them are concerning,” Gilbert said to Bermazohn. “But Richard might not be the best person to respond.”

Gilbert instead suggested holding another special meeting with Wanda Heading-Grant, UVM’s vice president of diversity, equity and inclusion, where racial issues could be discussed in full.

However, Bermazohn repeated her request for Cate to answer race-related questions.

“What we’re looking for is the white leadership to address these issues,” Bermazohn said. “I understand that it’s uncomfortable for you to answer, but that’s why you need to take time to answer these questions.”

Gilbert then approved the request and began looking for race-related questions to ask Cate.

But before Cate had responded, another participant interrupted with a question about compensation in relation to general pay cuts which Cate started to respond to.

Bermazohn interjected and asked Cate again to address the question about race before any other questions for the sake of fairness.

Despite the approval of this request, Bermazohn was interrupted for a third time by Gilbert, who introduced a question about gender equity and childcare at UVM.

Then Melissa Murray, director of the Women’s Center, requested to return to the topic of racial justice.

“Talking about gender equity instead of talking about racial justice is a deflection,” she said.

Emerson stated in an email to the Cynic that deflection is a common tactic of white people, especially those in positions of power when talking about race and racism.

Listen to partial audio from the meeting here.

This article was updated Tuesday 8:05 p.m. to include Corredera and Emerson’s email statements, and to correct several comments from Caleb Gilbert, originally misquoted as Stephen Lunna.