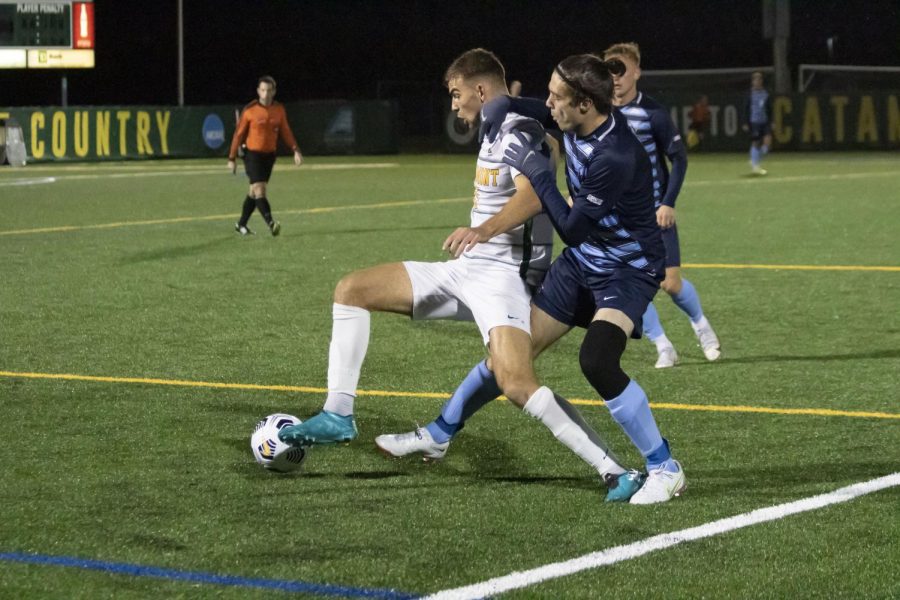 Members of UVM and Villanova University’s men's soccer teams fight for the ball during their game Nov. 18.

UVM men’s soccer finished its season with a 13-5-2 record, their first America East Championship title since 2015 and first NCAA tournament appearance since 2016.

Nine Catamounts were named to all-conference teams and graduate goalkeeper Nate Silveira was also named America East Goalkeeper of the Year, according to the America East website.

Vermont was also defensively solid as a team. They lost by two or more goals only twice and maintained nine shutouts, including five straight to start the season.

On offense, Head Coach Rob Dow’s side nearly doubled their opponents’ shot attempts across their 20 games played. They averaged 16.5 shots per game and allowed 8.6. Their 330 total shots is tied for second in the nation.

The Wildcats defeated Vermont 2-0 in last season’s title game, and the Catamounts had not beaten New Hampshire since 2016.

The Catamounts’ success earned them a home game in the NCAA tournament against Villanova University. Vermont fell 1-0 despite outshooting Villanova 30-9. Lerech had 13 shots, the most by any player in a Division I game this season, according to UVM athletics.

Despite the disappointing result, the Catamounts’ season can be considered a success. They dethroned New Hampshire to stand atop the America East and returned to the NCAA tournament. Their 13 wins are tied for the third most in program history.

Dow and his team have the talent and experience to build on this season’s success and advance deeper into the NCAA tournament.