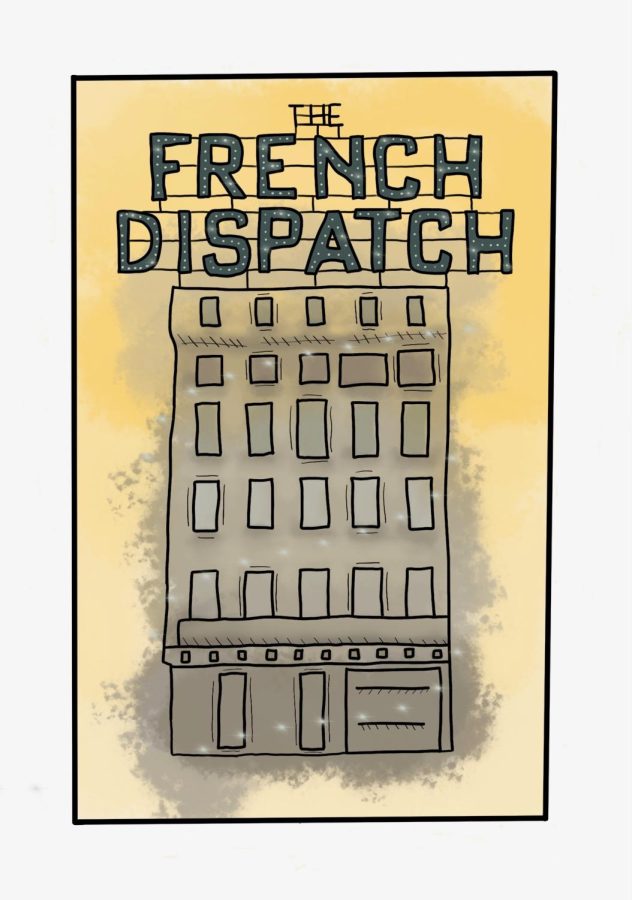 Wes Anderson’s new movie, “The French Dispatch,” premiered at the Roxy Cinema Nov. 5. Anderson described the film as “a love letter to journalists” and was inspired by the New Yorker, according to a Feb. 11 New Yorker article.

The film is a collection of four stories from the fictional magazine, the French Dispatch, soon to go out of print following the death of its editor, Arthur Howitzer Jr.

Opening with a travelogue of the fictional French city of Ennui-sur-Blasé, the setting of the film, the following stories tell tales of a psychopathic artist, a student revolt and a dinner with the police commissioner, all from the perspectives of journalists.

“The French Dispatch” is, at its core, intellectual escapism. Anderson transports the viewer to some time when a publication like the French Dispatch might have been respected and viewed with wonder.

The seriousness is punctuated by the romantically nostalgic French music that permeates throughout the film, lulling the viewer into a mid-century dream.

Anderson is channels a specific kind of journalism which, besides being pretentious, is steeped in privilege.

It plays off the idea that at some time in the middle of the 20th century there was a pure intellectual spirit which has since been lost. But this idea, besides being false, stems from a kind of white privilege.

This is evident in the way Anderson focuses on the stories of predominantly white intellectuals, the one exception being Roebuck Wright.

Wright is meant to be a combination of food writer A.J. Liebling and James Baldwin, according to the New Yorker article.

However, the only two things Anderson preserved from James Baldwin were his race and sexuality while omitting his literary voice. Baldwin was a buzz word that wasn’t backed up by any deeper character building.

As is typical with Anderson’s films, “The French Dispatch” was visually stunning. It was full of satisfyingly balanced scenes and a color palette that looks like it was lifted out of the river that runs through Ennui-sur-Blasé.

I was taken aback by the almost conversation-like back and forth between black and white and color. It created a vibrancy which danced between the written word and real life.

This dance continues into each of the stories. Anderson inserts the journalists into the stories they write, casting them as the intermediaries between print and people.

The film is a wistfully romantic view of journalists shrouded in an air of melancholy. All of Anderson’s characters are more like caricatures than real people. As they frantically dance across the screen, you only get an impression of who they are.

Even though the characters aren’t realistic, they are still enjoyable to watch. These are writers working for the sake of their craft, creating stories that move people, and in turn Anderson moves the audience.

I could understand how it was a love letter while watching. It was full of soapy, dramatic declarations of love in the form of absurdly beautiful stories that could only appear in a publication like the New Yorker.

However, when the lights came up in the theater, I was left with a pang of melancholy. In that moment it felt less like a love letter and more like a eulogy for an art form that is gasping for air in the 21st century.

If this film is a eulogy, it is a eulogy for a specific, privileged sect of journalism. Though this journalism may be full of wonderful stories, they aren’t complete. So similar to the characters, the audience is left with only an impression of a diverse field.