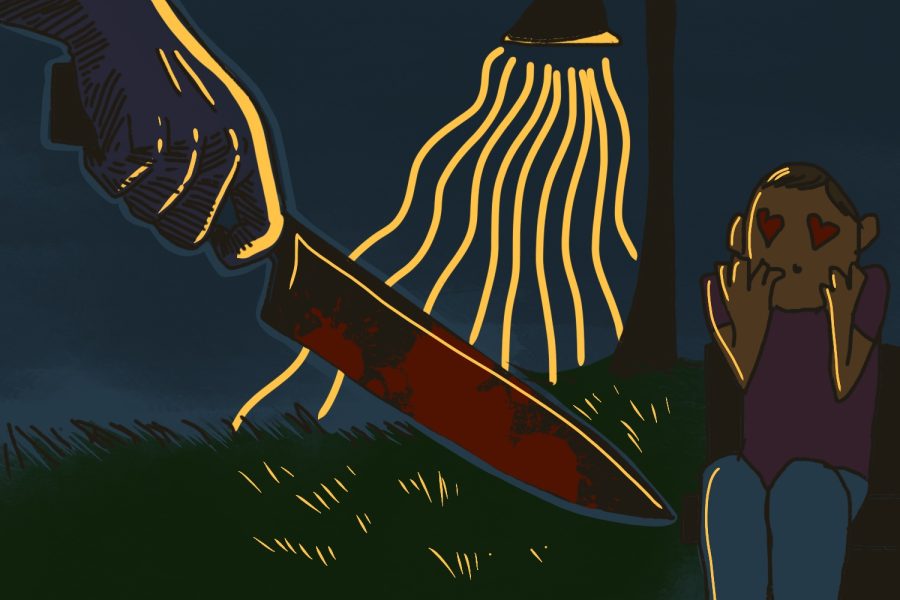 After another TV show dedicated to telling the horrific story behind serial killer Jeffrey Dahmer was released, my TikTok For You page was flooded with edits and point-of-view videos glamorizing something that never should be.

It seemed like every other video that popped up on my FYP was an edit of Evan Peters portraying Dahmer in Netflix’s “Dahmer – Monster: The Jeffrey Dahmer Story” with captions such as “he ate” and “he looked too good in this role.”

This is not the first time a Netflix Original incited such behavior on the internet. After the release of “Extremely Wicked, Shockingly Evil and Vile,” a show about serial killer Ted Bundy, many young women made POV videos making comments such as “I wish I was one of Bundy’s victims” and “he was so hot.”

I could not make sense of these comments. Why would anyone find a serial killer attractive? Why would they wish to be a victim?

Being attracted or obsessed with serial killers could be a means of understanding their violent behaviors and relieving fear, according to an April 10, 2019 article by the New York Daily News.

If it were possible to understand why any individual would be pushed to commit such gruesome crimes, maybe it would be easier to feel less scared of the world we live in. Romanticizing and joking could serve as a form of coping.

Women are taught from a young age to be cautious and fearful of men and of walking alone at night. I could understand wanting to learn how these predators’ minds work in order to be better equipped if I were ever put in a dangerous situation.

However, by putting ourselves in the shoes of these monsters, it opens up a gateway to feel pity or empathy for them.

By continuing to turn the same stories into movies and documentaries for the purpose of understanding how the mind of a serial killer works, the media is turning these criminals into celebrities to fantasize about rather than fear.

Hybristophilia is the sexual attraction over someone committing an offensive or violent act, according to May 7, 2019 article by Women’s Health.

Hybristophilia can be brought on because the ability to kill makes a person seem more powerful. This stems from an unconscious evolutionary instinct, according to a Feb. 1, 2019 article by SheKnows.

Another factor could be the urge to fix or reform a “bad boy,” according to the article.

It’s okay to be curious and wonder how a person gets to the point of murder, but when one starts to fetishize being one of their victims and tries to justify their actions, we need to draw the line.

I’ve never been the biggest fan of true crime. I would occasionally watch BuzzFeed Unsolved videos in middle school and early high school but that is where my knowledge on the subject ends.

I asked one of my fellow peers, first-year Abby Kushner, who is much more interested in true crime, for her thoughts on the subject.

“I love psychology, which is also my major, so I’ve always been interested in how some people are able to commit such horrible crimes and get away with it,” Kushner said.

Though she is interested in the psychology behind criminals, she sees a major issue with the romanticization of them.

“No one who is a murderer, rapist, serial killer, etc. should ever have sexual TikToks made about them,” Kushner said. “It’s just gross.”

Part of the sexualization is a result of casting for the shows about the killers. Casting former Disney channel actors, such as Zac Efron and Ross Lynch, to play serial killers is why so many young women are fantasizing about them.

Whenever I see Efron, who played Ted Bundy in “Extremely Wicked, Shockingly Evil and Vile,” I am immediately reminded of his role as Troy Bolton in the Disney channel original movie “High School Musical.”

Getting Efron and other Disney stars to portray these killers breaks a sense of innocence and childhood.

I understand why Ted Bundy needed to be cast by a conventionally attractive actor because it was the main part of how he would lure women. Jeffrey Dahmer, however, was not known for being attractive.

Still, Dahmer has been played by widely popular actors such as Evan Peters and Ross Lynch, conventionally attractive men, who were sexualized by the media enough before taking on these roles.

By having teen heartthrobs you would see headlining magazines playing these roles, the line between killer and hottie is blurred.

Many of these serial killers, such as Dahmer and Bundy, have been dead for decades, yet the media still seems to be obsessed with them.

It feels disrespectful to the victim’s families to continually have their names and stories making waves in the media. How many movies, documentaries and podcasts do we need of the same story?

Various people have spoken out, denying Netflix permission to use their stories. One such person was Eric Perry, the cousin of Rita Isbell, whose brother was one of Dahmer’s victims, according to a Sep. 27 Mashable article.

“I’m not telling anyone what to watch, I know true crime media is huge rn, but if you’re actually curious about the victims, my family (the Isbell’s) are pissed about this show,” Perry stated in a Sept. 22 Tweet.

Having these events televised and resurrected in the media can be re-traumatizing for these families. It’s time to give it a rest.

We need to stop treating these murderers as celebrities because it leads us to separate them from having committed some of the most heinous and unforgivable crimes.

True crime is a very fascinating subject and I get the appeal, but we need to recognize how truly awful and sick these killers are.

It’s not cute to have a crush on a serial killer or to make sexual comments about them just because one of your favorite actors is portraying them.

Real people and families are affected by these violent acts. Bundy and Dahmer—and any serial killer for that matter—are monsters and should be known as such, not as sex symbols.