Professor Garrison Nelson remembers speaking with one student who argued that the walking segment of the Kake Walk, called “Wokin’ fo’ de Kake,” celebrated the athletic ability of blacks, he said.

“I said, ‘Wokin’ fo’ de Kake’ does not celebrate the intellectual achievements of the blacks,” Nelson said.

The vernacular used during Kake Walk was a “textbook example of racism,” James Loewen wrote, as it specifically distinguished between black and white speech by portraying the former as uneducated. 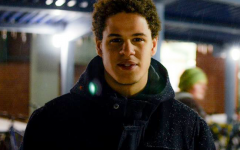 “The Kake Walk is especially insidious in that it’s a caricature of a caricature,” Cooper said. “White people dressed as black people based on stereotypes envisioned by white people.”

“There’s always been this dynamic of whites looking to black culture for entertainment,” Gennari said.

However, in 1969, it was clear that the Kake Walk “had run its course,” Nelson said.

“Martin Luther King had been murdered,” he said. “Civil rights really had taken a hold.”

The Phi Gamma Delta fraternity, in a letter to the Burlington Free Press Oct. 30, 1969, stated “it [would] enter no walkers in the annual Kake Walking competition.”

“The Brotherhood empathizes with the feelings of the black community,” they wrote. “[The Kake Walk] is a degrading activity not fit for any winter weekend or celebration, particularly at this period in our nation’s history.”

The following day, the would-be directors of the 1970 Kake Walk officially declared it was cancelled that year, according to their statement at an Oct. 31, 1969 press conference.

“In these sensitive times it is possible to interpret this tradition [of the Kake Walk] as being racist in nature and humiliating to the black people of this nation,” the directors said at a press conference.

No social practices should be permitted to breed intolerance.”

“No social practices should be permitted to breed intolerance,” President Rowell said.

“The alums were saying, ‘We won’t give you any money, we want Kake Walk,’” he said.

In a letter sent to Rowell Nov. 12, 1969, Leo Spear ‘49 wrote, “If the University proposes to permit the militant minority to direct the path of this University then, in my opinion, an unrestricted gift will be supporting something in which I don’t concur.”

“We concurred in the thinking that it is a general social weekend and the decision of what should take place was appropriately the students’ decision,” Rowell stated in his response to Spear.

One alumnus sent a letter to Walter Bruska, then-vice president of University Development, about the decision to end Kake Walk.

“I think many alumni, particular those who are most active, will feel badly that the unique winter event has been thrown out,” Phil Robinson ‘48 said in a letter to the Alumni Council.

I think many alumni, particular those who are most active, will feel badly that the unique winter event has been thrown out.”

In the Nov. 11, 1969 issue of the Cynic, Brenda Eastman wrote a letter stating her opposition to the decision based on previous Kake Walk poll results.

The Kake Walk wasn’t a low-budget event. According to financial records, the final event in 1969 cost the University roughly $36,000. Adjusted for inflation in 2015, that’s about a quarter of a million dollars, according to the U.S. Bureau of Labor Statistics’ Consumer Price Index Inflation Calculator.

The University even hosted Janis Joplin and Smokey Robinson as the main performers at the final Winter Weekend in 1969.  She died in October 1970.

Some alumni sent letters to the Vermont Cynic expressing their unhappiness with the decision.

“Congratulations! The super sensitive students of the hallowed halls have succeeded in destroying one of the few things which brought attention to the University of Vermont,” Peter Coleman ‘66 stated.

However, others spoke up in support of the end of the performance. Ken Wibecan wrote a column in the Oct. 25, 1969 Vermont Freeman, which was reprinted in the Nov. 4, 1969 issue of the Cynic.

“White Kake Walk defenders would do well to stop lying to themselves about the origin of their tradition,” Wibecan stated. “It was conceived out of prejudiced, bigoted minds and as such it must be completely destroyed or the sore that has been created will continue to fester.”

Some alumni commended the administration for bringing the event to a close.

“Where human rights and human dignity are concerned there can be no compromise,” Walter Delano ‘50 stated in a Nov. 3, 1969 letter to Rowell.