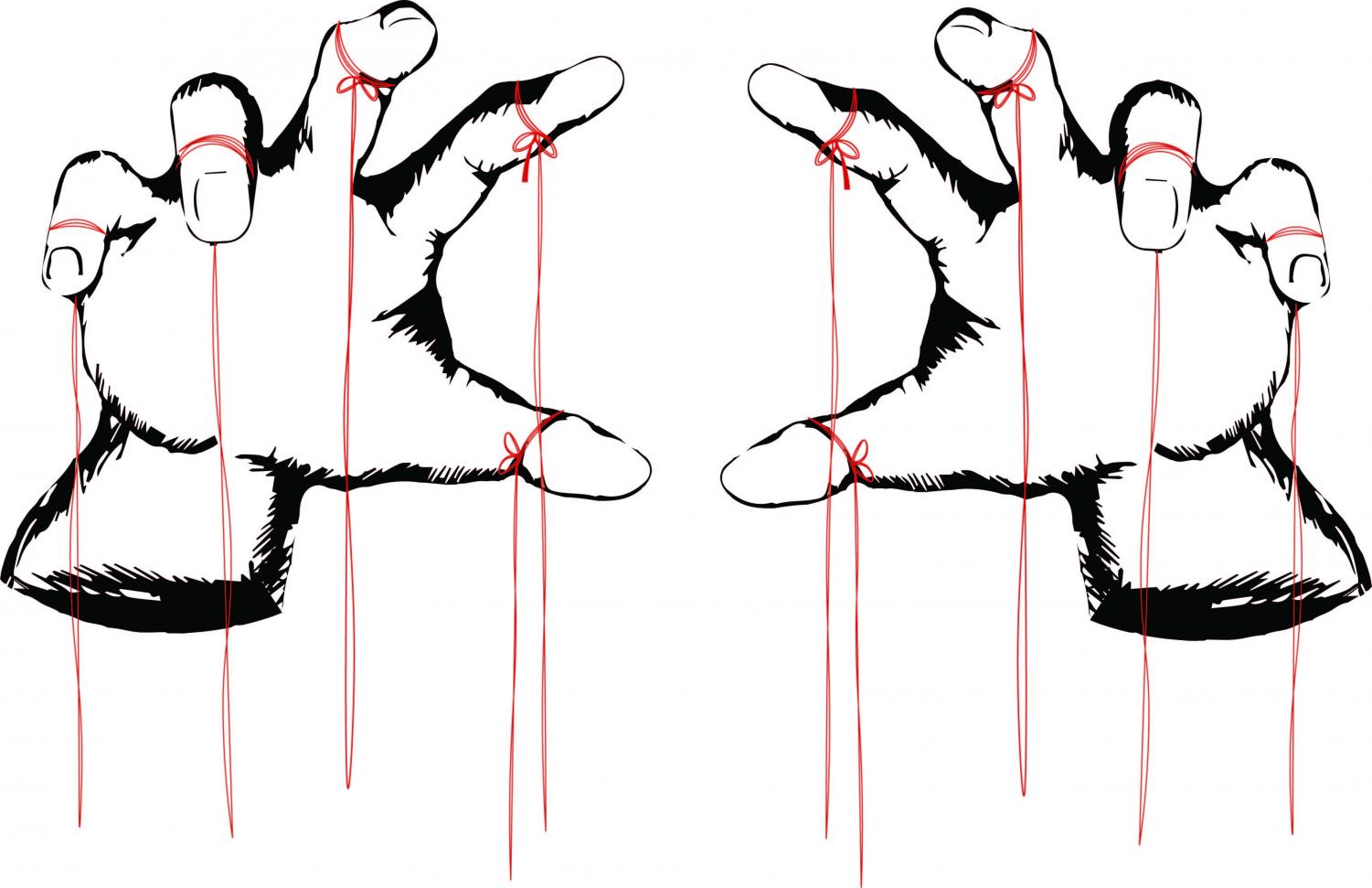 Posted on a cluttered Davis Center board, a poster with the image of a hand maneuvering a puppet has a message in white text with a red background strewn across its top.

“Don’t be their puppet,” lays across the top, written in all capital letters , waiting for wandering student eyes.

This poster and others like it are the latest campaign from student activists in the Coalition for Student and Faculty Rights in an attempt to raise awareness against what they see as the UVM administration sacrificing academics, especially in the liberal arts.

The posters were created by seniors Seth Wade and Chris Gish, both members of the coalition.

“I’m so tired of the administrators just sucking up more and more power, and everyone kind of takes it,” Wade said. “The situation seemed really dire, and I just wanted it to get out there.”

But UVM administrators say the picture is more complicated than that.

The Cynic broke down the posters point by point. Here’s what we found:

“Dr. Garimella directed the removal of students and faculty from the IBB steering committee,” and “Once again, students and professors are being excluded from making vital decisions about our University.”

UVM’s Incentive Based Budgeting model, first implemented in 2016, is a model that distributes University finances across the different colleges based on student enrollment in those colleges, according to UVM’s Division of Finance webpage.

President Suresh Garimella did remove students and faculty from the IBB committee, not as an effort to take away power, but to put power in the hands of those actually making financial decisions, said Bill Falls, dean of the College of Arts and Sciences.

“The Steering Committee is being disbanded, effective immediately, and is being replaced with a new IBB Advisory Committee comprised of the responsibility center deans and chaired by [Provost] Patty Prelock and [University Treasurer] Richard Cate,” Falls stated in an Aug. 28 email to CAS faculty.

While students and faculty are no longer a part of managing IBB, this was not in order to take away power from non-administrators, Falls said in a Nov. 13 interview.

“The folks who have to make the financial decisions for the University should be the ones that advise the president on the model’s content,” Falls said. “It wasn’t really an attempt to wrestle power from anybody.”

“I think there are always more steps that could be occurring to have students voices heard,” he said. “More accessibility to administrators is always the best way when trying to make a more inclusive and diverse community.”

To the administration, student voice is extremely important, and a lot of effort goes into communicating with students, Cate said.

“We have to pay very close attention to what the students want if we want to educate them,” he said.

However, due to the sheer number of enrolled students, listening to students is not an easy task, Cate said.

“The students speak with 10,000 different voices, so you may get 20 people that put up posters, but what do the other students think about this matter?” he said. “We don’t really know because that’s not how it goes.”

“Also over the summer, department chairs were told to expect even further cuts that will lay off or reduce faculty to part time, just as happened during the previous two academic years… More cuts are coming.”

Wade said administrators may be making cuts to the liberal arts because UVM wants to become more focused on science, technology and mathematics.

Garimella and other senior administrators don’t have the power to make department cuts, only college deans, Falls said.

“All of the decision making for any redistribution of resources for the college, or for hiring, are done by the dean,” he said. “It’s not possible that the president would require cuts to the liberal arts.”

Cuts to CAS have been made not because the liberal arts aren’t valued, but because there are fewer students applying to CAS overall, Cate said.

However, cuts to CAS have made it difficult for programs to reach their full potential, said John Franklin, professor and chair of the classics department.

“There’s been a policy of not replacing retirees, so you can have departments where important subiects are not taught,” he said. “In the classics department, we don’t have an ancient historian to teach Greek and Roman history anymore.”

“The average salary of upper administrators has gone up 35% after inflation in the last decade.”

After calculating the increases in base pay of the top seven most well-paid administrators using data from the 2018-2019 UVM List of Base Pay and comparing the results to the inflation rate over the last decade, administrative salaries have gone up 35%, Gish said.

However, that number is incorrect, Cate said.

“First of all, they’re all together in a ten-year period, so even if that were true, it’s about 3% a year, which is not unusual,” Cate said. “For administration, it’s been a 24% increase over the last ten years. The faculty salaries went up 30% over the same period.”

“The New England Commission of Higher Education listed concerns like our ‘undeveloped and complicated’ general education requirements…. Some programs have been so gutted that they cannot provide a substantive course of study for their students.”

“UVM has yet to create a cohesive, university-wide general education enterprise,” said the 2019 accreditation report from New England Commision for Higher Education.

General education also needs attention because requirements are so different across university colleges, according to the report.

“UVM has yet to create a cohesive, University-wide general education enterprise,” the report stated.

CAS has general education requirements in literature, humanities, fine arts and quantitative reasoning, but other schools are different.

However, CAS is struggling to make ends meet, Franklin said.

“A lot of us feel like we’re at the point where we can’t cover our basic core curriculum, and these additional classes that will draw people from other colleges,” he said. “Some people think we’re in a death spiral.”

STEM subjects are often more popular than humanities subjects because of misconceptions about a liberal arts degree, Franklin said.

“Humanities have come to be regarded as a luxury for people who can afford to gamble with their future,” he said. “It’s totally possible to get a job, but I think there’s less willingness to take that chance.”

“This general education curriculum needs to focus on providing students especially in the professional schools, with more breadth in the liberal arts,” he said.

“I think protests are good, but there’s a perception that students are young and angry and always protesting so we don’t have to pay attention to it,” he said. “Letters from parents are extremely valuable because they’re the ones paying the money. If parents are complaining, it’s another story.”

Administrators, including the president and provost, meet with SGA at least once a month, so directing concerns to SGA is the best way to communicate with administration, Cate said.

“I really would urge students to use SGA as a vehicle to pass the message,” he said.

The best way to make voices heard is through student activism, Wade said. “I think that there are so many great activist groups on campus,” Wade said. “But we so often focus on a lot of different areas and all these different actions, and I think we really need to come together.”

This story was edited at 6:44 p.m. Dec. 8 to include the number of administrators in Gish’s salary calculations and to correct the mis-paraphrasing of a quote by Wade.