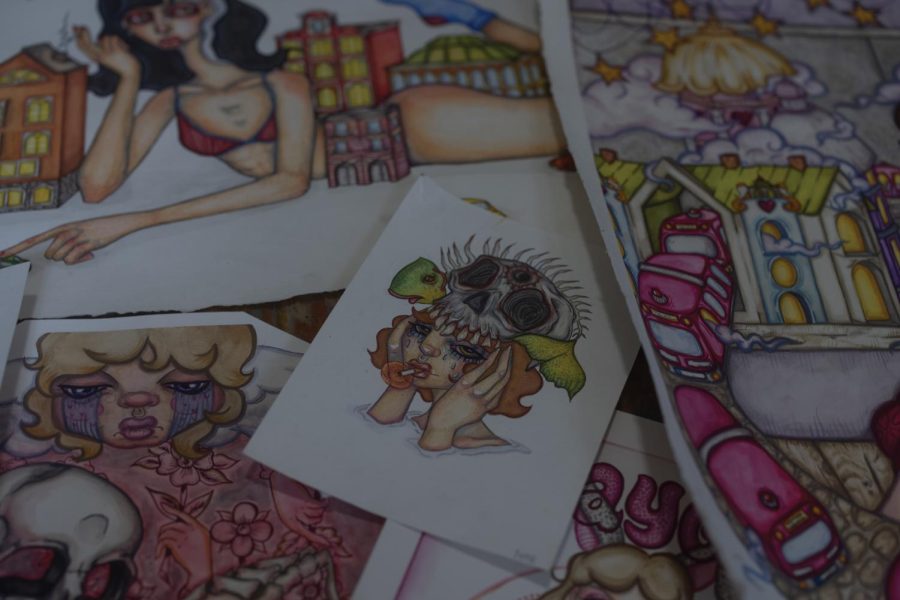 Sophomore Symoad Frolik works to balance her life as a UVM student and tattoo apprentice.

Frolik got a tattoo at Imperial Tattoo Company in Burlington in August.

After expressing her interest in tattooing to the artist, he invited Frolik back to the shop to paint, she said.

This began the unofficial prerequisite for becoming a tattoo apprentice, Frolik said.

“And then I just kept going in every single day for, like, three months,” Frolik said.

Before the jump from paper to ink, all tattoo artists must undergo a long, stressful period of vetting, known as an apprenticeship, Frolik said.

The apprenticeship process takes an immense level of dedication, said Drew Holland, the artist who invited Frolik to come to the shop and paint.

Holland started tattooing full-time three years ago and apprenticed under Jamie Pompa, the owner of Imperial, who is now Frolik’s mentor.

The process of becoming an apprentice is intense and goes beyond artistic talent, Holland said.

Tattoo apprenticeship is a closely-guarded, secretive tradition, which can make the process really stressful for some people, Holland said.

“There were two other people who wanted to be taken on,” Frolik said. “They just messed up and were told never to come back.”

With this pressure looming over her for months, Imperial Tattoo finally offered Frolik a position as an apprentice on her 21st birthday in late October 2021, she said.

Since recieving the apprenticeship, Frolik balances her time between school full-time and honing her craft at the shop. Maintaining that balance is challenging, she said.

“I’m about to start my dream career, and for some reason I’m still pursuing a degree,” Frolik said.

However, the transition to official apprenticeship has been smooth, and she goes into  work six days a week, Frolik said.

“The important thing is Symoad showed up, she kept showing up, and now she’s part of the team,” Holland said.

After five months of training, Frolik is nearly ready to work on skin, Holland said.

Yet she knows there is so much more to learn, Frolik said.

Frolik remembers drawing as a kid in the backseat of her family car as they moved across the country to their new home on a nature reserve in California, she said.

“Once I got out to the reserve I would just walk around and draw everything I saw,” Frolik said.

Drawing, and later watercolor painting became a constant in her life, as her family moved around a lot when she was younger, she said.

“I have attention deficit issues, so it also really helps with that,” Frolik said.

Symbolism drives Frolik’s art and she often adopts a surrealist style, she said.

She’s a fan of artists such as Alphonse Mucha and Egon Schiele, but draws influence from her perceptions of the world around her.

“I like the idea that if I paint someone a picture, it doesn’t necessarily have to do anything with them, but they still know it’s for them,” Frolik said.