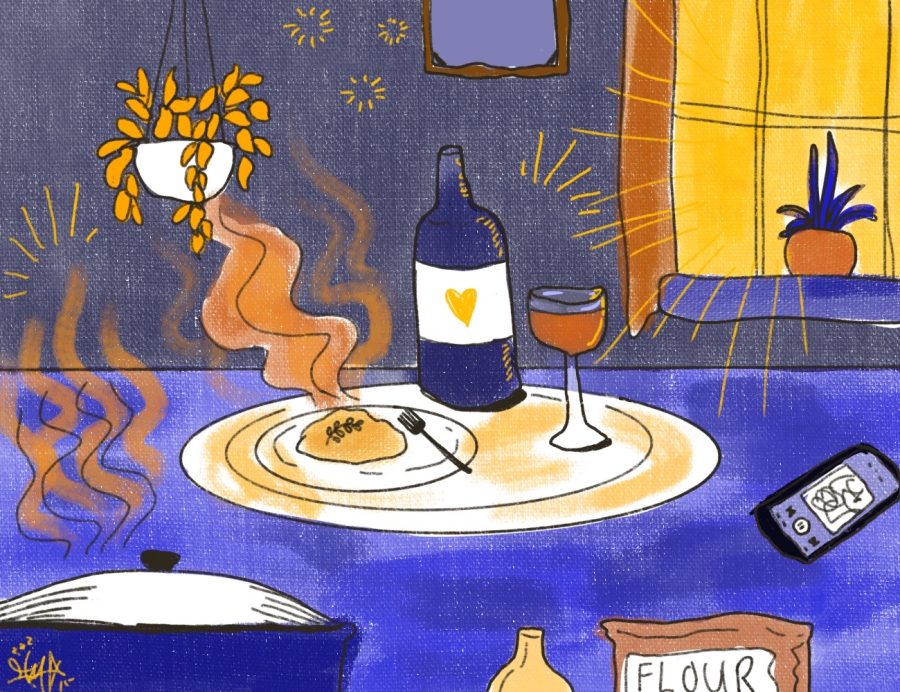 Cooking a meal from scratch and carefully following steps from a recipe can be rewarding, but getting drunk and winging it is more fun.

I began a weekly tradition with my friend Peter since moving to Burlington in December: cooking for our friends every Saturday evening.

The idea came to me after taking a kitchen job for the Vermont National Country Club this fall. I used to dread the drone of tickets printing out at my station as I tried to stay out of the way of seasoned cooks barking, “Behind! Sharp! Corner!”

Despite the chaos, I came to enjoy the hustle and found myself, both to the amusement and perhaps minor annoyance of my Chef, following him around to badger him with questions as he worked.

I absorbed what I could and took what I learned back to Peter’s apartment.

I used skills that Chef taught me, such as how to dice an onion without crying – breath through your mouth – or, which is even more useful, how to not slice the tip of my thumb off in the middle of dinner service.

Cooking night is a constant work in progress. When we first started, I asked Peter what kind of seasonings he had stocked for us.

His kitchen is small; the dining table almost takes up the whole room and if our friends are in there with us it can be hard to move around.

The grates of the burners on the stovetop are slanted so our pans sit lopsided on them. With no can opener, we’ve had some close calls stabbing away at canned tomatoes.

We love the unconventionality of our kitchen; it requires some serious quick thinking and adaptation.

One night I reached to add potatoes to a covered steaming pot and I realized the lid had no handle on it. Peter came to my aid by using a screwdriver to pry the lid off. It is now one of our most useful kitchen tools.

Peter and I like to play music while we cook. We sip $8 wine from plastic cups and pretend to have some semblance of class.

Other nights we blast Peter’s favorite EDM playlists. Regardless of music, by the end of the process we’re both drunk and I usually forget to lower the heat, or Peter gets carried away with the red pepper flakes.

Our friends gather in the dining room to enjoy the meals we make, among them have been the likes of Don Angie’s Pinwheel Lasagne, chicken piccata, steak and mashed potatoes and more.

It may be a ways away from Vermont National, but it’s not bad for a couple of college students.

We even bought a can opener.