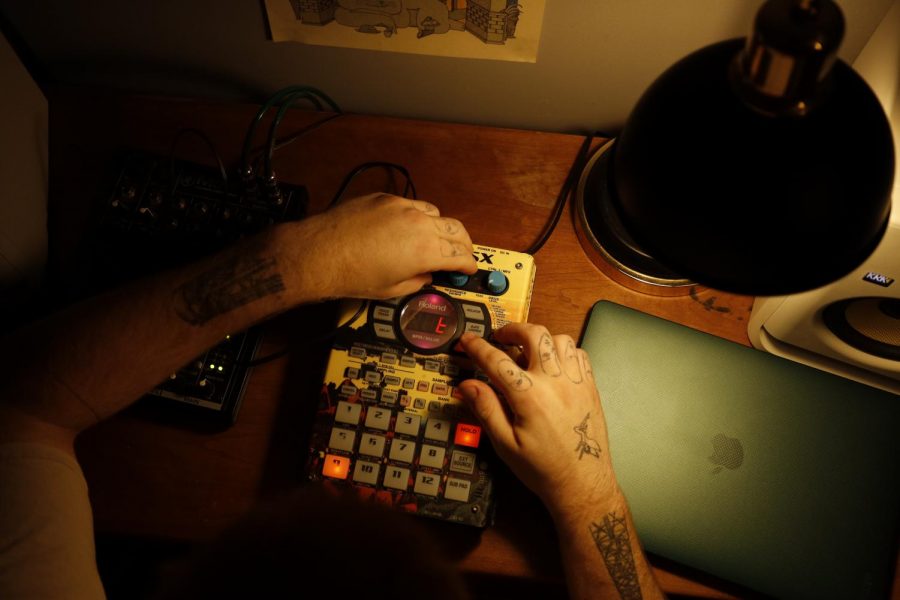 In a college town notorious for amateur indie-rock, the thuds of bass-driven music spilling from basements of student apartments are changing the pace of nightlife.

Kicking overplayed hits and garage bands to the curb with their techno tunes, a community of UVM students and alumni have shifted the house party scene and their own musical interests into a new genre: dance music spun by DJs.

One of the crowd’s new musicians is Noah Schniedman ‘20. Schniedman said his childhood fostered a love for music that set him up to thrive in the Burlington music scene, first as an indie-rocker and now as DJ Fuck.

“My parents are old hippies and I played a lot of rock music in high school,” Schniedman said. “When I came to Burlington, I just kept playing rock music.”

Schniedman performed in the Burlington-based group Full Walrus. When the band broke up in 2019, Schniedman said he began to step away from the atmosphere of 90s rock and began spending time with a very different genre.

“A lot of the music I was listening to was transitioning into more abstract and psychedelic and long-form stuff. There was a lot of house music being brought in,” Schniedman said.

Schenidman’s immersion in house music paired with his love of music production gave way to a new path. He said he was hooked by House’s opportunities for improvisation, experimentation and small employed changes.

“It was really interesting to me. It felt very visceral and a lot more raw than some kinds of rock music I had grown up listening to,” Schenidman said.

However, he is still performing and producing indie-rock on Burlington act Lily Seabird’s upcoming album “Beside Myself.”

Chaz Krouse ‘21 is another artist that recently fell into the DJ scene and is known there as DJ Greyhound. He said he started by messing around using synthesizers and drum machines with friends.

Krouse said eventually, he decided he wanted a way to showcase his work. He began by playing small shows for his friends and quickly received invitations to do so at parties.

This is where Krouse said he was able to experiment. He learned performing as a DJ is dependent on finding harmony with an audience, he said.

“Getting people excited is the whole value of it,” Krouse said. “Sometimes though, I want to make and perform things that get me really excited. It’s about finding a good balance between like, ‘Here’s this thing I’m into,’ and ‘Let’s show everyone a good time.’”

Junior Gavin Wilczynski is a frequent DIY-techno show attendee. He said he appreciates the power that a live DJ holds over a playlist being shuffled.

“DJ’s are an integral part of the energy that’s being created, like a piece to that puzzle,” Wilczynski said. “The music can become much more nuanced, a lot more intricate and it can become more exciting to your audience.”

Energy is key to both the artist’s and audiences’ enjoyment during any musical performance. The role of the DJ is to ensure that it is flowing both ways and that it does not stop, Krouse said.

“It’s about projecting the energy of the environment back onto the people there to enjoy it,” Krouse said. “It should be more about them than it is about the person spinning and I think that’s what draws me to it.”

Smooshed into a sauna-type environment where words get lost, vision is strobed and energy is bouncing, Wilczynski said there is just one thing to do: dance.

Junior Olivia Zito said that dancing is how you give back to the DJs.

“When I go out, I want to have a good time,” Zito said. “I want to dance. That music is for us and we have to enjoy it.”