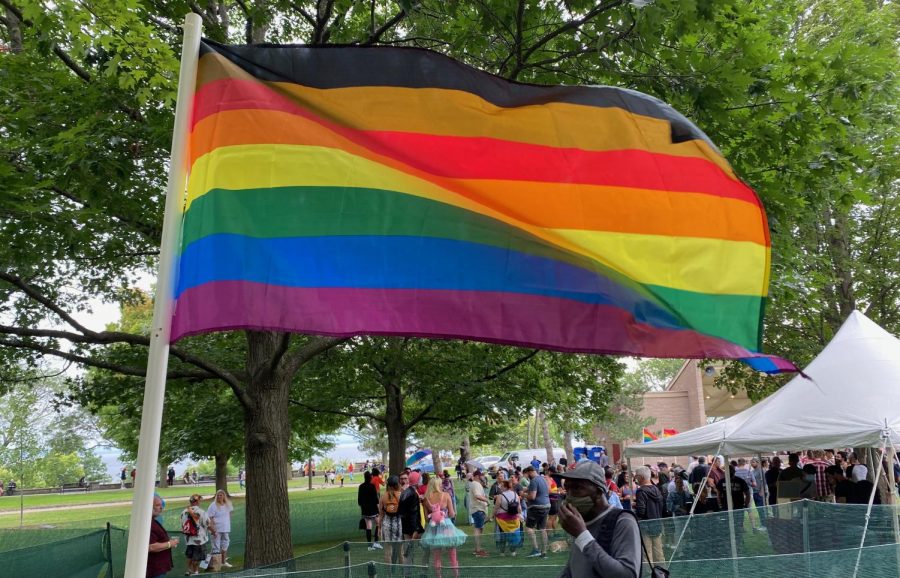 A Philadelphia Pride flag, which represents intersectionality within the LGBTQ+ community and a legacy of activism, flies over Burlington Pride Sept. 5.

Organized by Pride Center VT, hundreds of students and community members clad in rainbow gear marched from Church Street to Battery Park last Sunday, Sept. 5 to honor the LGBTQ+ communities of Burlington and beyond.

Justin Marsh, director of development and communications at Pride Center VT, began working as the lead organizer of the Pride Parade and Festival four years ago.

Marsh said that a major goal of Burlington’s Pride was to reject the capitalist undertones that other Pride festivals across the U.S. have adopted over the years.

“All these major cities have Pride, but they’re usually rainbow capitalism galore,” they said. “What’s nice about ours is that its grassroots. We, the community itself, are organizing it; we’re putting in the work.”

The Pride Parade and Festival began as an anniversary celebration of the Stonewall Riots but has evolved into the recognition of the struggles and victories of Burlington’s LGBTQ+ community, according to the Pride Center VT website.

The 1969 Stonewall Riots were demonstrations in protest of a police raid at the Stonewall Inn, a popular gay bar, according to The Leadership Conference on Civil and Human Rights website. The riots were a precursor to a nationwide gay rights movement.

Sophomore Ava Fusco said that the concept of grassroots Pride is meaningful because it encourages unity in the face of oppression.

“I think pride is important because it reminds us of our roots and revolutionary origins,” Fusco said. “Coming together in solidarity is really important.”

Marsh said that planning the event was no easy task. Due to the unpredictability of COVID-19, Marsh said they got a much later start than usual.

“Normally we start planning for Pride in the fall, meaning it’s a full year-long thing,” they said. “We weren’t able to start planning until May this year. It was like planning on expert mode.”

Although Marsh and their supporting committee had significantly less time to plan, attendees wouldn’t have known. The final product resulted in smiling faces throughout the event.

When parade participants arrived at Battery Park, they were met with a bustling, joyous atmosphere. From live musical performances to food trucks to drag, Battery Park was brimming with smiling faces.

Stella said Pride is important because it sheds light on queer voices in a heteronormative world.

Stella parted with a few words of wisdom to students at UVM who may be struggling with their identities.

“I waited until I was 22 to come out,” she said. “If you are uncomfortable with your identity or sexuality and you want to explore that, then fucking go for it.”

Out from under the thumb of “rainbow capitalism,” Burlington residents were able to join together as a community to celebrate their individual identities.