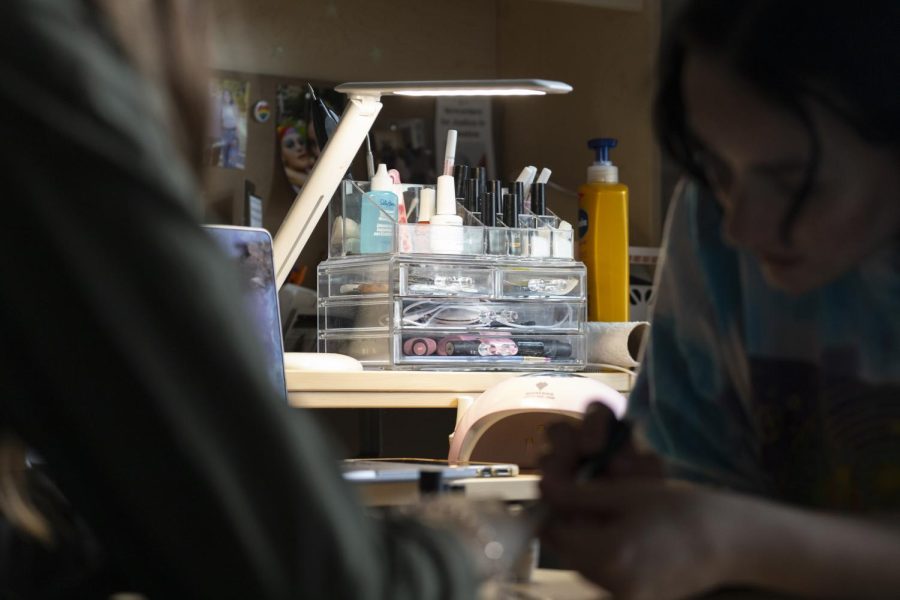 First-year Devon Whelchel sits at her desk in UHeights South, prepping her table and setting out colored polishes for her next client to choose from.

Whelchel started offering manicure services in her dorm room this semester, she said. She has a studio set-up at her desk, with cases for polish, grooming tools and towels for clients to lay their wrists over. After hanging up flyers in UHeights South, Whelchel said she gained 15 clients.

Whelchel offers a gel manicure service in a variety of colors for $25, which lasts up to a month and keeps nails healthy while allowing them to grow without becoming brittle, she said.

Whelchel’s manicures started as a self-care practice, but as her skill grew she decided to expand her services, she said.

“I was addicted to getting my nails done, and finally I decided I should just try it myself because it’s so expensive to get them done at a salon,” Whelchel said. “To me, it’s a form of art, and that’s what I’m passionate about.”

Whelchel said she started doing her own nails in quarantine, when she was worried about nail salons closing and having nowhere to get her self-care fix.

Friends started asking her to do their nails and when she arrived at UVM, Whelchel decided to take manicuring seriously and begin charging for it, she said.

One of her clients, first-year Jocelyn Beecher, said she was impressed by the professionalism of Whelchel’s work.

“It was like a little spa just in Devon’s room,” Beecher said. “I think it’s so convenient to have her right on campus, and it’s really cheap compared to going to a salon in Burlington.”

First-year Siena Webb said she preferred the experience over going to a nail technician in the area.

“It was super convenient, and she’s really flexible in her schedule,” Webb said. “It was more intimate, like I was hanging out with a friend rather than paying someone to do my nails for me.”

Salons around the Burlington charge anywhere from $30 to $50 for the same service Whelchel is offering, before tip. For example, Heavenly Beauty Spa in Winooski charges upwards of $40, according to their website.

“I’m not claiming to be a business, I just like doing this,” Whelchel said. “It makes people happy.”

Nail technicians in Vermont must complete 200 hours of instruction on how to trim, cut and paint nails in order to earn their certification and work in a salon according to the Vermont Office of Professional Regulation.

In Vermont, nail technicians must be issued a certificate to work in any salon, according to Title 26 of the Vermont statutes. Whelchel doesn’t have too much concern about anyone asking her to shut her services down, she said.

However, Whelchel only offers gel manicures, as acrylic services require a license, she said.

Whelchel said she isn’t in it for the money, although she enjoys having a bit of extra cash from this side gig. Manicuring is a way to express herself and to offer people an alternative to nail salon prices that may be too high for a college student.

Whelchel will keep her operation running, and hopes to gain more clients and experience as she continues following her passion, she said.