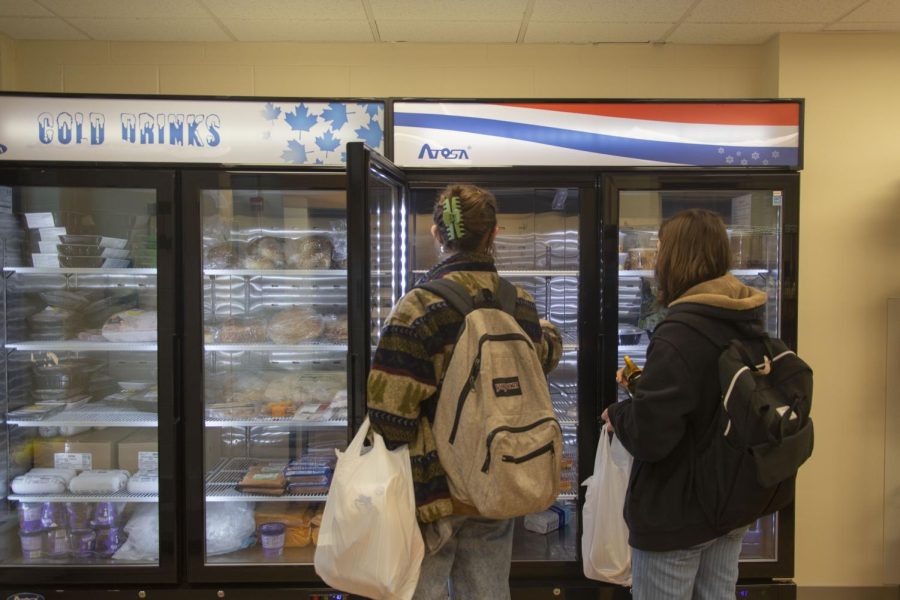 The Cupboard first opened Feb. 24, 2020 in Hills Agricultural Science Building. It relocated to the Living/Learning complex in February 2022 after the ceiling collapsed and asbestos was found in August 2021, McGalliard said.

“They found asbestos all in the insulation that was in the ceiling, it landed on all the food,” McGalliard said. “All the food was compromised so we had to throw away thousands of dollars worth of stuff.”

This event prompted Rally Cat’s Cupboard to offer pop-up markets in front of the Howe Library and in the Davis Center while looking for a new location, McGalliard said.

“It helped us realize that we could position ourselves in areas of high traffic where students are more often and then it helps break down a lot of stigma,” McGalliard said.

The success of the pop-up markets encouraged the Cupboard to pursue a hybrid model including pop-ups across campus and regular hours at the new location, she said.

“We try our best to simulate a grocery store experience for those who don’t have the ability to go and experience that,” McGalliard said. “We want everybody to have a dignified experience.”

One in five UVM students were food insecure in 2016, according to a 2017 survey conducted by the University of Vermont.

In the future, the Cupboard hopes to create a student garden and host pop-up events where students can learn the skills they need to cook meals, said junior Maeve Forbes, co-president of Rally Cat’s Cupboard.

Reilly hopes that Rally Cat’s Cupboard can serve as a hub for the smaller food pantries in UVM’s identity centers and allow them to use the Vermont Foodbank chapter network to order items at a discounted rate, she said.

“We recognized there, particularly around finals time, that many in our student community would run out of points and would not have a lot of food, and at that time, we started using some of our operating budget dollars to stock our shelves,” Colston said.

Over the years, the identity centers received institutional funding to expand their services and meet high needs, Colston said.

“All of the identity centers are seeing high needs and seeing our food literally fly off our shelves,” Colston said.

The existence of multiple food pantries on campus and the creation of Rally Cat’s Cupboard affected how UVM supports individuals who are food insecure, Colston said.

“I just know that people appreciate knowing that there’s Rally Cat’s Cupboard as well as other pantries and cupboards,” Colston said. “They also know there’s more and that there’s not just one place on campus, which actually is very comforting and really holds that need a little bit more securely.”

The Cupboard can be found at L/L C102 on Wednesdays from 3-6 p.m. and Fridays from noon to 4 p.m., or at their pop-up events in the Davis Center Atrium on Tuesdays from 1-3 p.m.

To set up another time to pick up items email [email protected] or or direct message @rallycatscupboard on Facebook or Instagram.