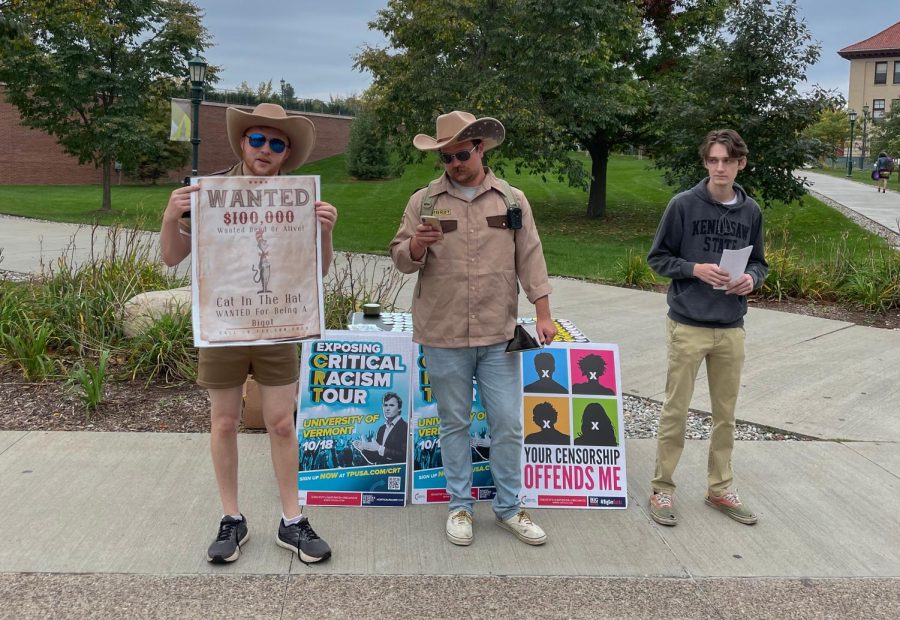 The Turning Point club tabled outside the Davis Center Oct. 5 and Oct. 14.

A conservative campaign made a stop on one of the country’s most liberal campuses and encountered protestors.

Turning Point USA is a nonprofit organization dedicated to promoting conservative values on college campuses, according to their website. On Oct. 18, their “Exposing Critical Racism Tour” visited the Hilton Doubletree in South Burlington, which was opposed by a student protest organized by the UVM chapter of the Young Democratic Socialists of America.

“If you believe in critical race theory, you are a racist,” Founder Charlie Kirk said, according to the Turning Point USA website.

Critical race theory is a framework of legal analysis that inspects race as a social construct used to exploit people of color, the Encyclopedia Britannica stated.

Last fall, SGA derecognized the UVM branch of Turning Point USA due to low attendance rates, according to an Oct. 2 2020 Cynic article

The organization still made their presence known on campus before the tour event. Turning Point USA tabled outside the Davis Center on Oct. 5 and Oct. 14, advertising for the event.

As a response to the organization’s presence, students from the UVM branch of the Young Democratic Socialists of America organized a protest, according to their Instagram page.

First-year Trey Cook organized the demonstration which began at Howe library. Twenty-five people showed up to voice their disapproval.

“Going into the event, we’re not expecting to change [Kirk’s] mind,” Cook said. “This is more of a show of solidarity with the groups that he is targeting.”

The protest marched from Howe Library to the Doubletree. They protested outside for about an hour before some of the protesters entered the event.

Fifteen protesters arrived at the hotel at 6:30 p.m. chanting “Hey-hey, ho-ho, Turning Point has got to go,” before they entered.

Junior Devin Mulac said he attended the event because he agrees with many of Kirk’s views. Mulac saw posts on Instagram before the event encouraging students not to attend, he said.

At the Hilton, the event was listed on screens as a “Campus Tour event,” omitting the host organization’s name. Turning Point USA hired Shaffer Security, a firm based in Dallas, to manage event security.

While the Cynic was interviewing people outside the event, Shaffer personnel stood behind the interviewees.

The Cynic did not enter the event. In the press pass application, journalists had to agree to terms which would limit the Cynic’s ownership of this article and accompanying media.

“[Media] company shall adhere to all direction, instructions and requests from Turning Point USA’s Communications and Media Director, or his designee(s), at all times. Turning Point USA shall have the final say on all matters,” article 11 of the policy stated.