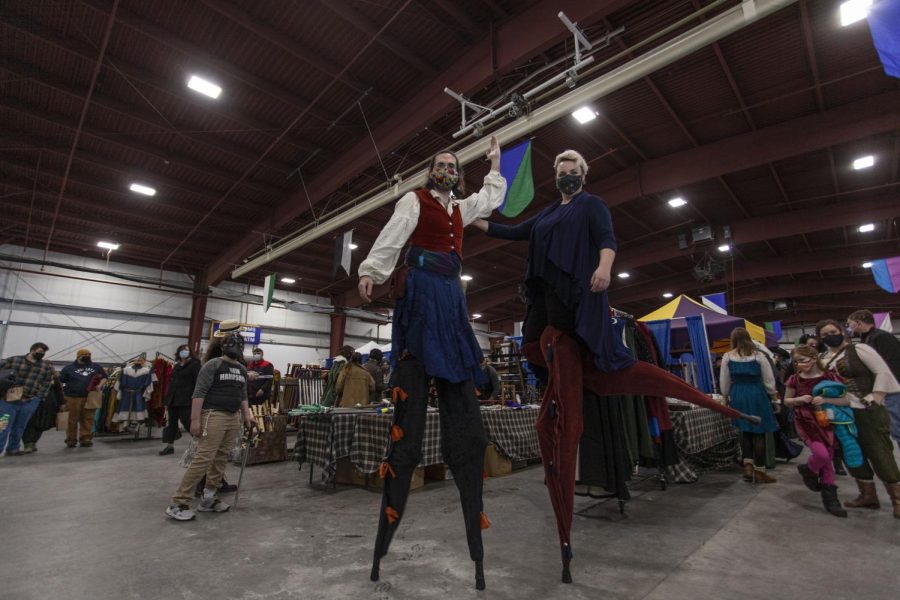 Two attendees of the Renaissance Faire pose on stilts Feb. 5. The Champlain Valley Expo Center in Essex Junction hosts the event every year.

The Champlain Valley Exposition hosted the fifth annual Faire on Feb. 6 and 7. Jeffrey Folb, owner of VT Gatherings and host of the Faire, said his two main objectives for the Faire include providing attendees with joy and supporting small businesses.

“I’ve always said that if I can make a living supporting other businesses and putting smiles on people’s faces, then I win,” Folb said. “And so far, I win.”

He said most other Vermont events cater to either adults or kids while the Winter Renaissance Faire offers fun for all ages.

“We make our events open to everyone, whether you’re five or 85, grandkids or grandparents. There’s something there for everyone,” Folb said.

All businesses in attendance at the Faire are from Vermont or the New England area, and have become well associated through the years, said Melissa Staib, owner of Chicken Fried Quilter, a business that sells handmade stuffed animals at the Faire.

“My favorite part of the Renaissance Faire is actually the camaraderie between the vendors,” Staib said. “We ended up getting to be a pretty tight knit group.”

Inside the Champlain Valley Exposition, vendors set up in rows of colorful tents to showcase their different trades.

Among them resided The Brotherhood of the Arrow and Sword, a medieval education group committed to the presentation and practice of medieval history and Historical European Martial Arts, according to their Facebook page.

The group does a weapons, soldiers and battlefield presentation in the morning, as well as a live steel presentation in the afternoon, where audiences can observe duels between trained combatants, said Brian de Catton, leader of The Brotherhood of the Arrow and Sword.

“We have a slew of hands-on educational displays and all of our presenters who will be there are all versed in talking to the public about what we do and what it was like back in the timeframe,” Catton said.

The Faire also provided patrons with fantastical elements such as knights and duels, as some vendors stressed entertainment value over the educational.

“Renaissance faires are to historical accuracy as cocoa puffs are to a good nutritious breakfast,” said Bruce Hoskins, owner of Lord Fafnir and Spawn, a psychic reading business.

Regardless of the philosophy toward historical accuracy or fantasy worlds, the vendors agreed the Renaissance Faire provides an outlet for those wanting to escape the real world.

“It’s the escapism, not just for myself, but you see it in a lot of patrons’ eyes and a lot of the Faire’s performers,” Catton said. “The escape from the humdrum of normal life, or the escape to what we would like life to be like.”