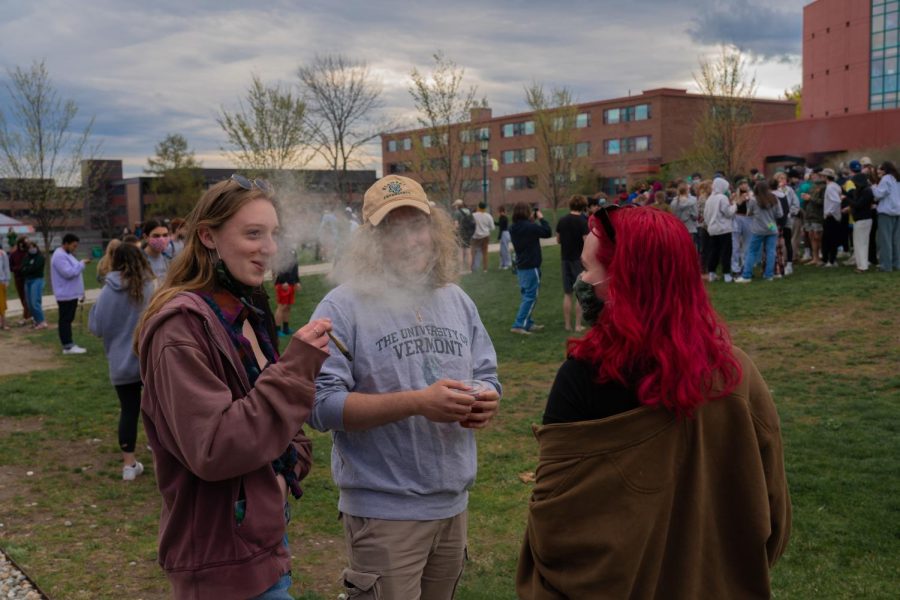 Students began gathering on campus annually on April 20 to smoke cannabis during the mid-‘90s. It has since been a recurring event, UVM Police Chief Tim Bilodeau said.

Approximately 500 students participated in the event annually prior to the pandemic, said Tom Fontana, the alcohol, cannabis, and other drugs initiatives manager for the Center for Health and Wellbeing.

Drug use on campus initially attracted attention in the ‘60s and the annual 4/20 ritual gained momentum during the ‘80s, according to an April 23, 2019 Cynic article.

The event was consistently held in front of the library in the ‘90s, according to article. It moved to the Redstone Green in the past 10 years.

“Last year, there were a lot of restrictions on students,” McCoy said. “I think it’s gonna be a lot bigger this year. There’s a bunch of sophomores who need it after last year.”

McCoy watched last year’s celebration from her Wilks Hall dorm window. She refrained from participating because she felt nervous about being written up by UVM Police Services, she said.

Since the onset of COVID-19 placed regulations on large gatherings, Smith wasn’t used to seeing crowds of people, she said.

“It was definitely the biggest gathering that I’d seen,” Smith said. “With COVID and everything, it was weird seeing so many people.”

Approximately 50 to 150 people were there, McCoy said.

“It was bigger than I thought it was gonna be, but definitely a smaller group than the pictures I had seen from past years,” McCoy said.

“Regulations related to COVID-19 are really specific to public health and not much on public safety necessarily,” Bilodeau said. “We play a peripheral component to that public safety in 2022.”

UVM Police Services was present at the celebration last year, but didn’t take much action, Smith said. They mostly asked people to put their masks on and social distance.

Resident advisors were not asked to go on duty this year, despite it previously being an expectation, said junior Harper Colburn, Christie Hall resident advisor.

“We really weren’t told that much of anything,” she said. “They used to have RAs do walks through the building at 4 and 4:30 p.m. But this year, there is nothing expected of us.”

Residential Life requires RAs to report any sightings of cannabis in the dorms, but anything happening outside of the buildings is not in their jurisdiction, Colburn said.

“A big thing about being an RA is that you’re not an investigator,” Henry said. “You’re just a reporter, which I’m thankful for.”

Henry had not heard directly from his residents that they were planning on participating in 4/20 celebrations, but expects the gathering to be as large as it was before the pandemic, he said.

“It’s very interesting the way the administration can, in some ways, condone an activity like that,” Henry said. “Like everybody gathering on the green.”

Police will be stationed on campus to monitor the April 20 gathering, but they mostly look to ensure safety and wellness, Bilodeau said.

“We’re just looking for people to be responsible, care for themselves, care for each other,” he said. “We don’t want this non-sanctioned event to have all kinds of other extracurricular stuff as well.”

“Anytime we have a large group we certainly encourage it to be as localized as possible,” Bilodeau said. “We’re reserving a particular space where we anticipate UVM students, and we don’t encourage a situation where UVM must use its resources to be there for people from everywhere else.”

The Center for Student Conduct does not prepare for 4/20 events, Director Kim Martin stated in an April 15 email to the Cynic.

“We are involved in responding to any reports of alleged violations that get referred to our office from Police and Residential Life,” the email stated.

Possession or use of cannabis by students is strictly prohibited by University policy, according to the Code of Student Conduct.

“It’s a non-sanctioned event, but there’s generally a gathering,” Bilodeau said. “It doesn’t change that drastically, even over a 20 year period.”