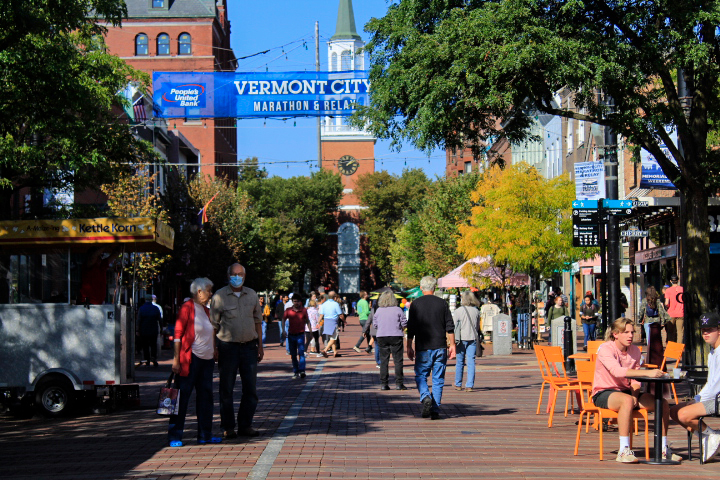 People walk down Church Street, some with face masks and some without Oct. 8.

This story was updated Nov. 8 to correct an attribution error.

Gender identity impacts perceptions of the pandemic and adherence to safety protocols.

“This was a period where we were kind of confused on what was happening with COVID and we wanted to be able to look into that area more clearly and collect data,” said sophomore Maegan Beckage, a researcher involved in the study.

After narrowing down their demographics to age and gender, they collected qualitative data by observing masking habits of people in northern Vermont, Beckage said.

Mary Burke, a senior lecturer with specializations in gender and social movements, said differences in gender socialization may have contributed to this pattern.

“Women are more socialized to listen to others, to put others’ needs at least on par with their own,” Burke said. “So many aspects of femininity are linked to community and nurturing, and our idealized versions of masculinity are being big, strong and kind of invulnerable.”

One aspect of this socialization that may be relevant is disproportions across gender in domestic labor responsibilities, Burke said.

“Women might likely have a lot of additional responsibilities like caregiving which puts added pressure on them to not get sick,” she said.

“To all the guys in my classes who don’t wear your masks over your noses, you all look dumb as fuck,” one of the submissions stated.

Although this data was collected in Vermont, there is evidence of the disparity in gender and pandemic protocol adherence around the world, according to a November 2020 study from scholarly journal VoxEU.

In March of 2020, 59% of female identifying respondents considered COVID-19 a very serious health problem compared to 49% of male identifying, the VoxEu study stated.

The study was intended to provide clarity for people living through the pandemic, and the information they collected will hopefully help scientists anticipate why there are various degrees of protocol compliance, Beckage said.

Recognizing the way identity impacts pandemic decision making is important as we move forward, according to the VoxEu article.

“The efficacy of government lockdown measures to contain COVID-19 hinges on people’s willingness to comply,” the VoxEU study stated. “It is critical to identify and convince those who are the least compliant.”