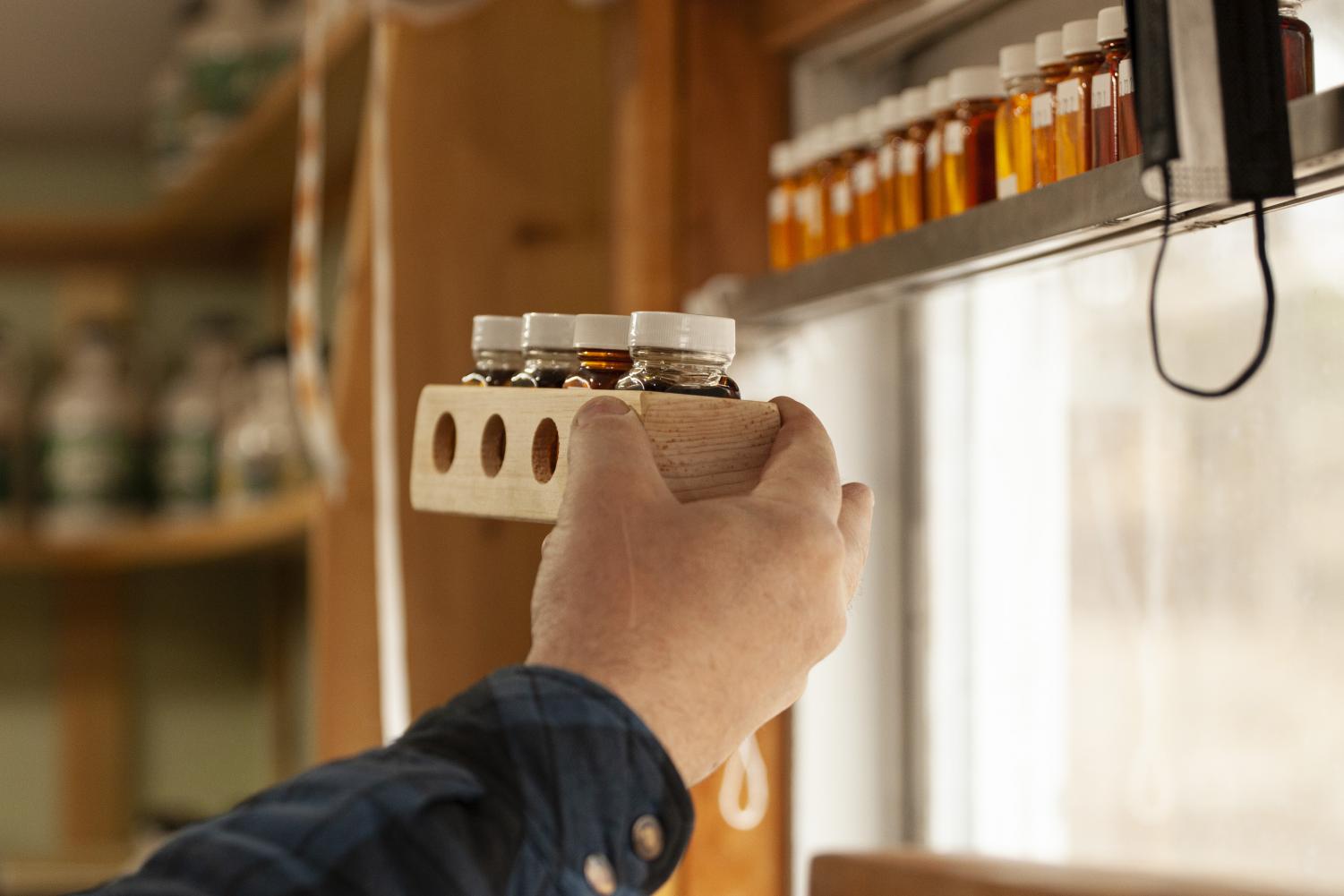 Once the grading process is complete, the syrup is contained in these glass jars at 190° F and immediately sealed to prevent contamination of the syrup. (Eric Scharf)

Once the grading process is complete, the syrup is contained in these glass jars at 190° F and immediately sealed to prevent contamination of the syrup.

“I see you! Come on up to the sugar barn,” Donald Schroeder said over the phone on a warm but brisk Saturday morning at Poor Farm Sugar Works in Colchester, VT.

The farm is an incredible sight. Rows of maple trees line the property. Behind the sugar barn, there is a house, in which the Schroeder’s reside.

When people think of Vermont, most of the time something involving “maple” comes to mind. Maple creemees, maple syrup, little maple candies.

The taste seems to be synonymous with the state, yet not many people outside of Vermont know how maple is turned from sap to syrup, or the importance of the industry to the Green Mountain State’s economy.

Donald Schroeder, wearing a blue flannel and a calm demeanor, said he started sugaring when he was younger, alongside his father, as well as commercially, and then took twenty years off from sugaring.

However, when he bought the property with his wife Valerie, he realized that there was something familiar – maple trees.

“We started walking around and realized that there were quite a few maples,” he said. “And the previous two generations sugared here so eventually a grove began.”

Schroeder started up the farm and officially began sugaring in 1998. He bought his first custom evaporator in 2001, which he said was a very exciting moment. The sugarhouse has been renovated multiple times, with a new roof being built around four or five years ago, said Schroeder.

“Every year there’s a new construction project,” he said.

Schroeder said that he wants to keep making updates to improve the farm without losing its charm.

But what makes this farm special is the people that work on it. There are no workers, only volunteers and friends who help Schroeder with the sugaring process.

“We try to have a good time sugaring and then we snowmobile together, deer hunt together, a variety of things,” he said. “They put in huge amounts of time with me, and they are all original people.”

Due to COVID-19, the farm is closed to outside visitors, but if they crave maple syrup, customers can pick some up from a round table in the driveway.

The sugaring process and products

Schroeder is in his element surrounded by maple trees and showing how sap turns into syrup. As Schroeder says to watch our steps when heading into the woods, it is impossible to take eyes off of the trees that grow on a downwards slope, each with a light blue tube connecting to main pipes that weave between the trees.

Some of the tubes have little nicks in them, which Schroeder said with a chuckle is because of the squirrels, who he says are their “worst enemy.”

The trees are on a downward slope for a reason. Schroeder said that the tubes that are drilled into the trees connect to a main pipe that flows downward containing sap that collects at the bottom.

It is clear that the trees on the property have been tapped for years. Holes line the trunks, but Schroeder said that new lines are drilled specifically not to harm the trees.

The sap collects at the button of the hill, and the next step includes something called “reverse osmosis.” This reverse osmosis process leaves sap that is ready to be boiled. This occurs in a smaller shack, with the sound of machinery making it hard to hear another.

“You bring the raw sap in, and with a high pressure pump, you push it through a membrane,” Schroeder said. “It literally splits the liquid, one part goes one way, one part goes the other way.”

The next step is contained in the main sugar barn, a small but practical building which allow for volunteers to flow in and out..

The aroma is heavy with maple and wood, with the main attraction being the custom made evaporator. The evaporator is illuminated by the natural sunlight flowing in from the open spaces in the roof that allow for steam to escape into the outdoors..

On one of the wooden walls, there is a small TV with images showing live camera footage of other barns throughout the property. This is to make sure everything is running smoothly.

Throughout the interview, volunteers would come in and check the TV, oftentimes double-clicking on an image of certain live footage to make it fullscreen and check in on the process.

The evaporators job, as Schroeder explains, is to boil the sap so it thickens and turns into syrup. It boils about 200 gallons of liquid an hour.

Unlike newer evaporators, which run on oil, this one runs on wood, which Schroeder said is becoming less common.

With the evaporation of water from the sap, the sap thickens. When the sap is hot enough, it is now syrup and powder is added in to help filter the syrup.

The last step is the syrup going through a pump into a filter press. Schroeder said it usually takes 40 gallons of sap to make a single gallon of maple syrup.

The Maple Syrup season usually starts in February and runs until April, with the colors and taste varying throughout the season.

Tasting fresh-out-of-the-tap syrup at the end of the tour, it is clear that there is a difference. The lighter one was sweet and light to the taste. The darker syrup had more of a kick.

No matter the color, knowing the long and complicated process behind the samples made the syrup taste better.

The importance of sugaring and the threat of climate change

Poor Farm Sugar Works is one of 1,500 sugarhouses in Vermont, which combined contribute to the state being the nation’s biggest producer of maple syrup, providing  over 50% of the country’s syrup.

However, like other industries reliant on nature and its climate, the maple industry has seen some drastic changes due to rising temperatures.

“We’re definitely starting to sugar earlier than we used to,” Schroeder said. “Now people tap in the late fall and early, like around December.”

According to a Dartmouth study of maple trees across the country, an increase in temperature affected sap flow, and this would therefore lead to a decrease in production.

Schroeder said that the earlier sugaring could be attributed to a variety of reasons.

“I’m sure it’s happening, but It’s not that easy to quantify,” he said.

Schroeder pulled off of a table an old looking notebook and flipped to the front, in which he has written the starting and ending times for the season. They were all over the place, with no consistent trend.

With the sugaring season winding down at the time of the interview, Schroeder said that after the season is finished there are always improvements and work to be done.

“We fill up the woodpile, and there is always pipeline repair stuff,” he said. “But for the most part we kind of slam the door shut, after this process it’s kind of nice to have a break.”

With the interview winding down, Schroeder checks in on the TV monitor, double-clicking on a camera that shows the barn at the bottom of the hill, tubs filled with sap.

“I think it’s almost time to get going,” he said.