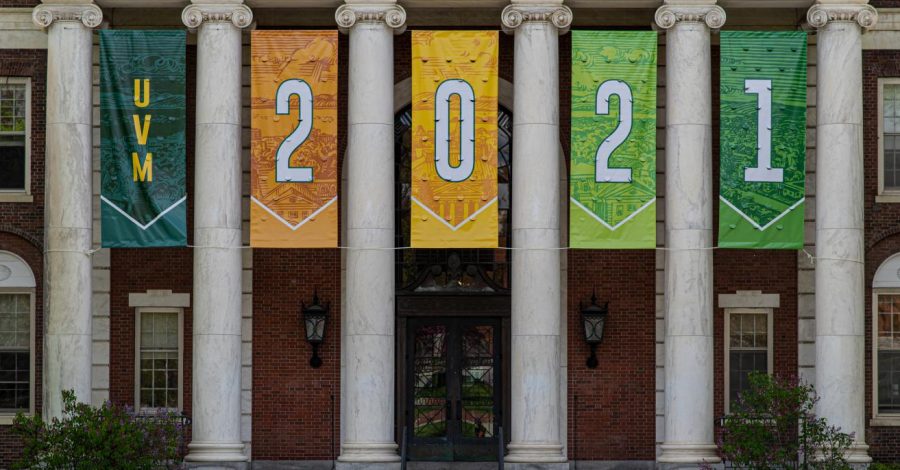 Class of 2021 banners hang from the Waterman building May 19.

The Cynic found five random seniors. We reached out to them to get to know them through five thought provoking questions. The list of students includes writers, cooks, activists and musicians. Each has their own story and their own plan after graduation. Here is a look into the class of 2021.

Rodriquez is a dietetics major from Connecticut and is originally from Costa Rica. After graduation she plans on completing an dietetics internship at the University of St. Joseph.

What clubs are you a part of?

“So in the past two years I’ve been a part of Alianza Latinx, and I’ve been on their executive board. For two years consecutively as the publicist. I create the posters and advertising for our events. I make the merch, so our hoodies and stickers. I created the new logo and stuff like that.”

What made you want to be a part of that club?

“I think the POC community and the Latinx communities specifically are so underrepresented, both at UVM and just Vermont in general. It was really important to me as a Latinx person to try and celebrate our community as much as we can. Just uplift those voices on campus.”

What’s your most prized possession?

“Well I actually got gifted a sunset lamp for my birthday. It basically just recreates a sunset. I use it every night, and I love it so much. It’s improved my sleep so much.”

If you could teach a class at UVM what would it be on?

“How much social media has changed our generation and how it will impact future generations.”

Who is your role model?

“My mom is my role model. She passed over a decade ago but she’s like absolutely my number one motivation for everything I do. She passed from cancer and so that determined why I wanted to major in dietetics. I chose to major in that because of the role that your nutrition has on your health.”

What song would you sing at a karaoke night?

Pieroni is a psychology major and music minor from East Greenwich, Rhode Island. He is a part of the on-campus fraternity Phi Mu Delta and president of Top Cats. After graduation he plans on working at an alternative school for kids with behavioral developmental disorders in Burlington as a behavior interventionist.

What’s something you love?

“My favorite thing in the world is to make people laugh and smile. So, I always love doing small acts of kindness and stuff because I feel like the greatest joy that you can get is just showing the people around you like how much you appreciate them.”

When you were a kid, what did you want to be when you grew up?

What made you choose your major?

“I was going to go to music school, because that’s what I thought that I wanted to do with my life, and then I realized that at 18 years old I wasn’t totally confident in my music abilities in general. So I decided I wanted to go to school, get a degree; something like fall back on.

So I took a semester off the first semester of my sophomore year because I had a lot of stuff happening at home. My dad was diagnosed with cancer, I just had major heart surgery.

I started going to therapy and I realized that I wanted to be a clinical mental health counselor, and I felt like that would be the best way I could give back to my community and really help a lot of people who often feel alone and feel that no one really understands their struggle.

I truly believe that everyone should see a therapist. I fell in love with psychology  and I’m really really happy that I did.”

What advice do you have for rising seniors?

“Don’t take what you have for granted, college moves by super fast and I think it’s important to take the time to not only focus on yourself but focus on your own path to health. Spend time with people who are genuinely people that love you.”

Press is an English major with a minor in Studio Art from Tenafly, New Jersey. She is currently the pastry chef at the Burlington Country Club and is thinking of pursuing the culinary arts after graduation. Press said she loves cooking for her friends, especially pasta carbonara.

What was a highlight during your time at UVM?

“I think probably my intro drawing class with Steve Budding. I loved that class. [When I walked into] the room it was just covered in old painting, old easels and artwork everywhere. We got to work with live models and that was the first time I’ve done that for an art class, and I learned so much.”

What’s something you could spend an hour talking about and not get tired?

“Food. I talk about cooking techniques. I do this with my roommates all the time. Now that I’m 21, I get to do wine pairings with my food so that’s something I get to connect with my mom about so we go on for hours when I go home.”

How would you describe your fashion style?

“My fashion style. Probably a little old for my age sometimes. I really really like business casual.”

Who would play you in a movie?

“Lily Collins, because I definitely love her as an actress and also I’ve got some intense brows so I would want someone to be able to do my brows justice.”

“I would go to the top floor of the Davis Center where they do events. The fireplace is such a great spot for studying during the winter and pro tip, I used to bother the person at the desk all the time about turning the fireplace on. The switch is on the right side of the top mantel.”

Chalco is a social work major from the Bronx, NY, but her family is from Ecuador. She is part of Alianza Latinx and the Black Student Union. After graduation she plans on giving herself a break after an exhausting year. She will return to New York and hopes to work with refugee communities. She also plans on applying to grad school for 2022.

“Definitely my mom. My mom has been my ride or die forever. And you know I think a lot about all the sacrifices she had to make in order for me to live my life. When I decided to go to UVM for college, my family was so scared, they’re like ‘why would you go so far away? It’s so cold over there.’

It felt good to set an example for my younger cousins, yes, before me I had cousins who went to college, but they all stayed close to home, whereas I came to UVM and was far away. It sucked because I missed out on a lot of family things, but they understood it was for the right reason.

It’s just taking those little steps for future generations. I think that’s what motivates me. My mom left her whole country. She came to this new world and tried to provide for her mom, herself and my older brother who was living in Ecuador at the time.”

What was your favorite class at UVM?

“I like my social work classes. The seminars were a lot better than [lectures].”

What is your tinder bio?

Where is the best place to eat in Burlington?

“Café Mamajuana is one of my favorites, it’s so good. The only sad thing about it is that it’s on Oak Street and they’re only open Wednesday through Saturday from 4 to 8:30 [p.m.]. Not enough time of the week.”

How would you describe your taste in music?

“I feel like my taste in music is all over the place. I work at the Davis Center and I was working with one of my coworkers and I put my music on and she said ‘your music goes from Hispanic, to white girl music to sad boy music, and now we’re back to rap.’ I don’t understand. It’s so all over the place.”

Zarzecki is an environmental studies major from Chicago. He is part of the Headwaters Magazine and loves to write. After graduation he plans on taking a two month road trip across the Western United States with some friends.

What shows have you binge watched?

If you could have picked a different major or added a major what would you pick?

Since I kind of stepped on campus I wanted to go into environmental journalism. At the clubs fair on the first day, I saw Headwaters Magazine. It’s been a really great experience because I’ve met a lot of really good writers.

I’ve met a lot of people passionate about environmental issues. I’ve learned a lot through writing my own stuff and editing other people’s stuff, and it’s just been an overall good experience and feels so good when we finally published the final magazine and it’s in your hands, it’s like ‘oh my god this is amazing.’”

And if you could tell a UVM first-year one thing, what would it be?

“Your friends are more important than your GPA. Looking back at my college experience I don’t really care about all the successes I had with GPA and internships and all that. Looking back at all the memories I’ve made with my friends, all the other stuff doesn’t really matter if you’re not happy with the people that are around you.”

What are you afraid of?

“I’m afraid of being in a situation where I can only eat fruit. I really hate fruit. Bananas are disgusting.”

Rodrigues, Perioni, Press, Chalco and Zarzecki and the rest of their senior class have gone through 45 COVID-19 tests, eight semesters, seven stressful course registration mornings, four cold Vermont winters, two University presidents and one global pandemic. Nevertheless, they made it through and are about to enter their individual post-grad world.