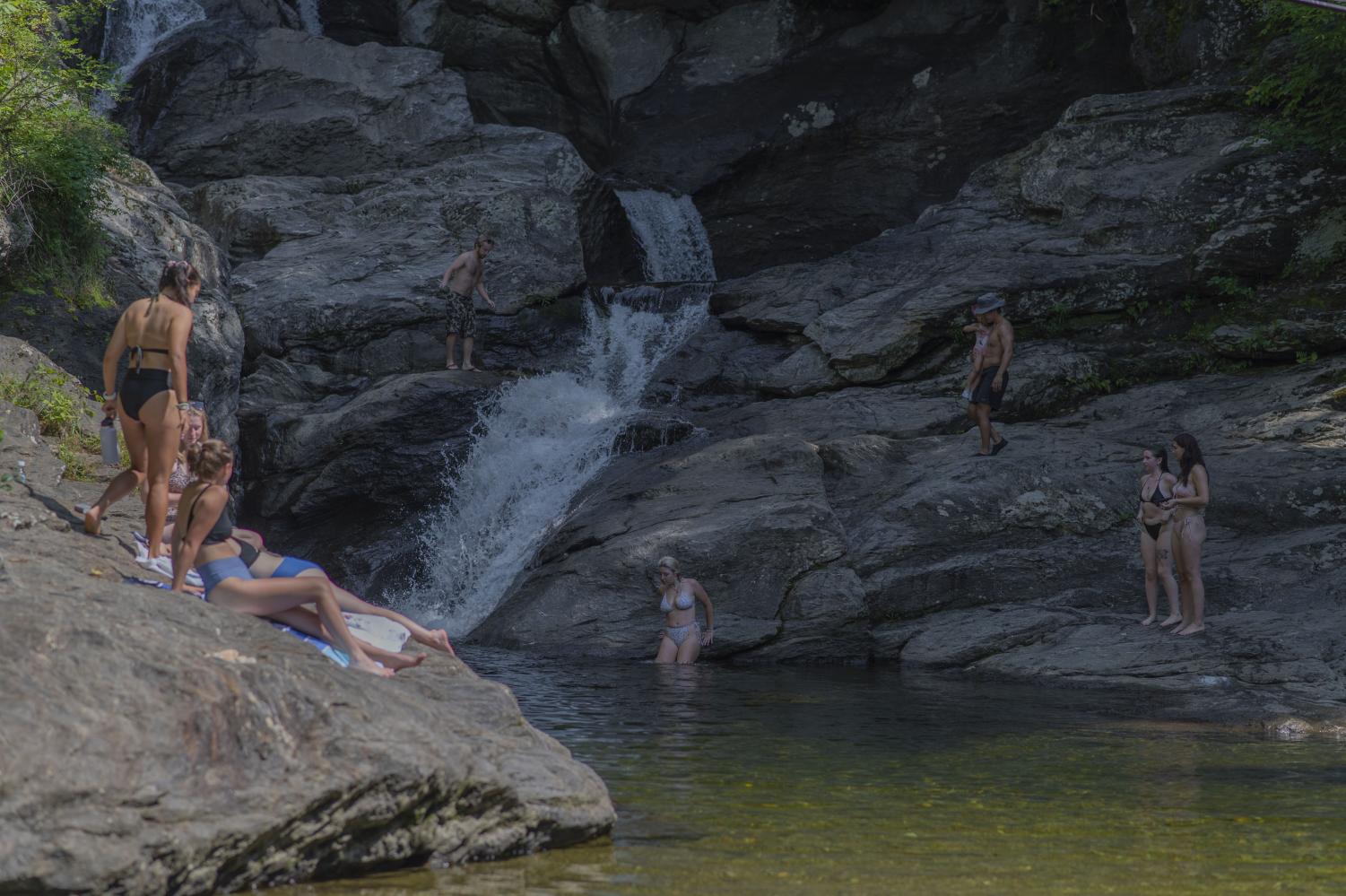 Student presence at swimming holes may cause tension for locals

Pockets of cool, shady pools pepper Vermont’s rivers, creating an oasis for UVM students plunging in for a refreshing dip.

Some students prefer the secluded Vermont forest rivers in Richmond and Huntington compared to Lake Champlain, although the Vermont River Conservancy said the presence of students can disrupt the local community.

Richarda Ericson, deputy director of the Vermont River Conservancy, said she welcomes UVM students to swimming holes as long as the environment and community remains respected.

The Vermont River Conservancy helps to protect public access to Vermont’s rivers for swimming, boating and hiking trails near the water, Ericson said.

Ericson said there can be tension between locals in the communities and out-of-state visitors to swimming spots, many of which are UVM students.

“I think that divide can exist, and I think that it also can be overcome through education and outreach and I don’t see that as a common perception among recreation site managers,” she said.

Senior Nora Greeley, an out-of-state student, said she has rarely seen this occur.

“One time I went to Bolton Potholes and there were a ton of students, it was so packed, and I could maybe sense some tension from the families then,” Greeley said.

Greeley said the longer drive to surrounding rivers was worth it for the cooler water temperatures compared to local lake beaches in Burlington.

“I found at the water holes there’s more shade, and I’m personally more likely to get in the water if I go to a water hole than if I go to the beach,” Greeley said. “I also think that they’re just unique to the area.”

The swimming locations are somewhat hidden, unlike spots in her home state of Massachusetts, Greeley said. Greeley’s favorite spots are Triple Buckets in Richmond, Bolton Potholes and Warren Falls, she said.

Cars line the dirt road in Richmond, VT at Triple Buckets, many with UVM stickers on the bumpers. The river is sandwiched by rocks people sunbathe on, while others jump from high places into deep pools, shouting as they create large splashes.

There are a mix of people at each spot. More students attend Triple Buckets and Bolton Potholes, which are both closer to Burlington in comparison to Warren Falls, Greeley said.

However, not all UVM students take advantage of these swimming holes. Despite hearing about these spots, junior Kate Sinz has never visited.

“I heard a couple people talking about going to a swimming hole outside of Burlington, and they were saying how nice it was, and I [thought] I should figure out where that is so that I could maybe go sometime,” Sinz said.

Sinz said she feels like these spots aren’t easily accessible to students who haven’t been before because the spots are somewhat hidden.

“If I were to go swimming, swimming holes are probably where I would go, but I would have to figure out more clearly where they actually are,” she said.

Sinz thinks having maps and information on campus would help educate students on how to find these spots, she said.

However, with more access to these swimming holes comes the responsibility of understanding the spaces and communities students enter.

Ericson said it is important to consider that not everyone comes to swimming holes for the same purpose.

“College age students tend to go for more thrill seeking activities like jumping from high rocks that tend to be a little more inherently dangerous activities than say a young family who may just go to a sandy beachy area of a river to wade in,” Ericson said.

Ericson also said that if you are visiting for the first time, be aware of the community you are entering.

“I think going to a swimming hole can provide you the opportunity to have a little bit of a lens on a community and in Vermont here,” Ericson said. “I think we’re uniquely situated in that we have these incredible places that are so important to our communities.”

Ericson said she recommends student visitors learn as much about the swimming hole as they can before they arrive to monitor water level and the surrounding terrain.

“I think that we really look to UVM students and college age students in general, as the next generation of stewards of our incredible places,” Ericson said.