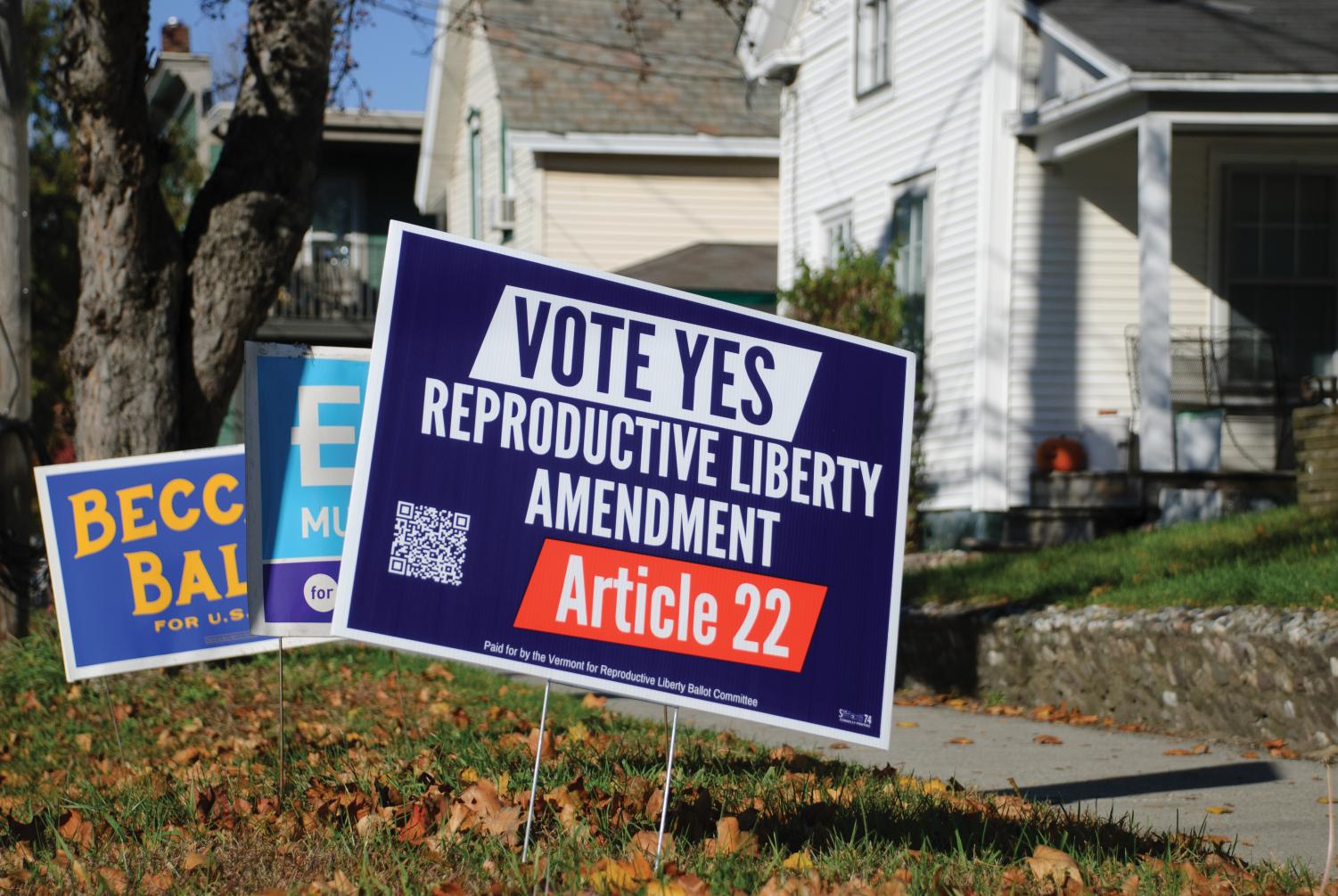 A sign supporting Vermont’s Reproductive Liberty Amendment Oct. 21. The purpose of the ballot measure is to ensure reproductive autonomy for everyone in Vermont. (Grace Argiriou)

A sign supporting Vermont’s Reproductive Liberty Amendment Oct. 21. The purpose of the ballot measure is to ensure reproductive autonomy for everyone in Vermont.

The future of reproductive autonomy in Vermont

The RLA is a ballot measure in Vermont’s 2022 general election with the purpose of ensuring reproductive autonomy for every person in Vermont, RLA Campaign Manager Sam Donnelly said. Donnelly’s first day as campaign manager was June 24—the day Roe v. Wade was overturned.

“The really important part of the actual language of the amendment is that the state cannot restrict that right unless justified by a compelling state interest achieved by the least restrictive means,” Donnelly said.

Simply put, “a compelling state interest” means a court cannot rule based on their opinion, they must prove that it would be absolutely necessary for reproductive autonomy to be limited and the ruling would have to be applied in the least intrusive way possible.

The idea and development of the RLA—also known as Proposition 5—began in 2018, Donnelly said.

Organizations such as Planned Parenthood of Northern New England advocated for the RLA as it moved through the Vermont political system until it gained enough momentum to require its own campaign management, Donnelly said.

After Ruth Bader Ginsburg passed away in 2020, fears increased that the court would overturn Roe v. Wade because former President Trump would get an opportunity to appoint another more conservative justice, Donnelly said.

“That was when a group of legislators in the state government decided that we needed to do more to protect everyone’s right to personal reproductive autonomy,” Donnelly said.

When Roe v. Wade was eventually overturned, it wasn’t as abrupt of a decision for some people, he said. There were signs leading up to the decision.

“That doesn’t make that day in June any less devastating,” Donnelly said. “Everything went from a threat to people being legally prosecuted, and the lives of people seeking abortion care around the country became much more dangerous.”

Vermonters’ rights will not change if the RLA is passed, as abortion remained legal in the state even after federal protections were lost, he said. People will just have much stronger protections concerning reproductive autonomy.

To amend the Vermont Constitution, the desired change must pass the House and the Senate, and then pass the two chambers again after the next legislative election, following the first passage of the amendment.

The governor must then declare it a ballot item. Finally, voters vote on the amendment on Election Day and it must pass by a simple majority, or at least 50% plus one vote, Donnelly said. By now, the RLA has reached the final stage in that process.

Working for the RLA was a personal decision, Donnelly said. He was inspired by the work of Planned Parenthood, the League of Women Voters, the American Civil Liberties Union as well as the members of the RLA Steering Committee.

“Joining the campaign was an opportunity to work for an issue that I’m really passionate about, which is protecting personal reproductive autonomy in the state,” Donnelly said.

Vermonters should support this amendment because reproductive autonomy is essential, Donnelly said. What it conveys is that everyone has the right to choose and nobody can legally take that right away.

Maggie Talty is a senior public communication major. Her capstone project is working on the RLA.

Talty works alongside five other public communication students to help with a variety of tasks for the RLA, specifically to inform students about the RLA, what it means and the importance of voting for it.

When the Supreme Court overturned Roe v. Wade, Talty was terrified but unsurprised because reproductive rights have always been widely debated, she said.

“I believe the relationship between politics and reproductive rights are so heavily entwined because rights are constantly up for debate within the public sphere,” Talty said.

When talking to the public about the work she is doing for the RLA, one of the first questions Talty is asked concerns abortion.

“The opposition has done so well at framing the conversation around abortion only, which removes the ability to have a conversation about the larger issue: reproductive autonomy,” Talty said.

People receive abortions for a wide range of reasons, she said. There’s also a big misconception that reproductive rights only include abortion access.

“People forget that reproductive rights and bodily autonomy impact a spectrum of people, including recipients of [in vitro fertilization], an array of gender identities, individuals with various health complications and more,” Talty said. “I was more shocked regarding the clear misrepresentation of the issue in a lot of conversations I have with individuals today.”

Reproductive rights can be misconstrued to be just abortion rights, Talty said. Reproductive autonomy includes sterilization, birth control, and all reproductive-related health which is what the RLA is encompassing.

The impact as felt by students

By voting, students, in particular, have the chance to make a world of difference in how they want to live in the future, Talty said.

Junior Willa Yonkman felt horrible when Roe v. Wade was overturned, but she figured she would be safe in Vermont because of the liberal attitude towards reproductive rights and the strong presence of Planned Parenthood, she said.

“This is a topic that students in particular feel really strongly about because most of us are at an age where if we got pregnant and couldn’t have an abortion it would be really bad,” Yonkman said.

Due to how politicized the Supreme Court is, conversations about reproductive rights have become such a slippery slope, Yonkman said. Without state protections such as the RLA, abortion and all reproductive health issues could become even more illegal to where it is no longer a state-by-state decision.

More information about the RLA, which will be on the ballot as Prop. 5 on Nov. 8, can be found on the RLA campaign website.