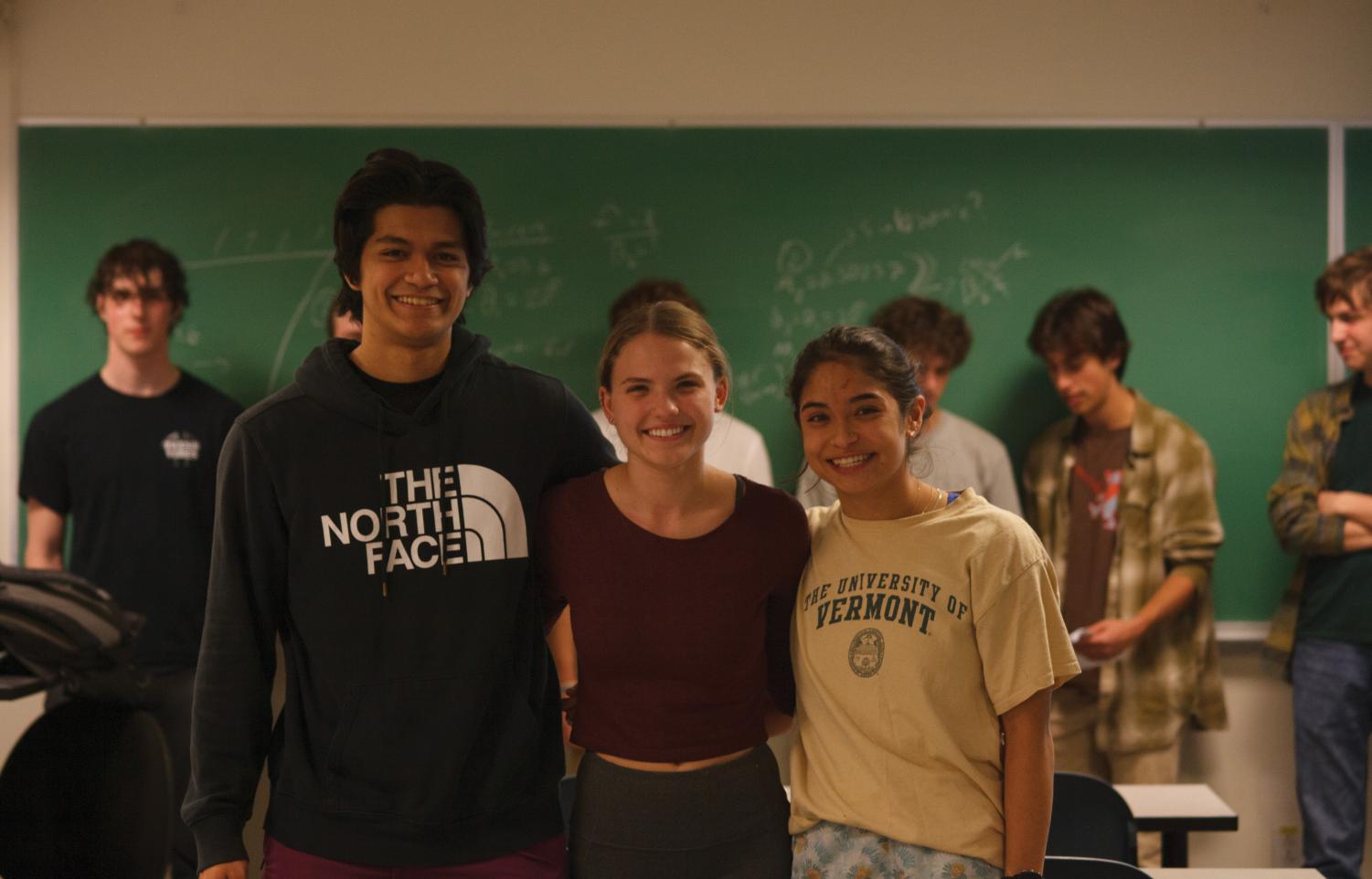 _(left to right) Officer Gabe Frigo, President Mollie Clyde and Treasurer Sophie Gessman, a junior, Oct. 26. Frigo and Clyde will be graduating this spring, leaving younger club members to take over leadership of the American Institute of Aeronautics and Astronautics club. (Mac Mansfield-Parisi)

_(left to right) Officer Gabe Frigo, President Mollie Clyde and Treasurer Sophie Gessman, a junior, Oct. 26. Frigo and Clyde will be graduating this spring, leaving younger club members to take over leadership of the American Institute of Aeronautics and Astronautics club.

The sky’s the limit: UVM’s astronautics club rebuilds from COVID-19

Rebounding from a pandemic, the American Institute of Aeronautics and Astronautics club shoots for the stars as it plans to revive the club through a project where students will build a rocket glider.

The club provides students interested in astronomy and engineering with the opportunity to get involved with aerospace. With connections to workers in the aerospace field, the UVM branch opens the door to new career opportunities, according to the UVM College of Engineering and Mathematical Sciences webpage.

“The pandemic really crippled the club […] and [the club] died off, secluding each individual,” AIAA President Mollie Clyde, a senior, said.

Since aerospace is not very competitive at UVM, AIAA had been a small club even before COVID-19, only meeting once monthly, senior Gabe Frigo, a club officer, said.

“It was not a super committed club,” Frigo said. “COVID essentially killed [the club] and no one wanted to put effort into it.”

During the pandemic, AIAA could not work on physical projects, so students spent their meetings on the researching phase, which is the most boring part of the process, Clyde said. With the revival, club members look forward to working on their first aerospace design project, a radio controlled rocket glider.

“The group is going to design and build the whole [rocket] and they’re going to decide on what shape they want the glider to be, how they want the rocket powered, what type of rocket engine and building of the RC component of it,” Clyde said.

Frustrated by a lack of aerospace-focused classes offered at UVM, Clyde took the challenge of reviving AIAA despite having only been a part of the club for a short time. She hoped to give underclassmen a chance to participate in actual engineering projects.

“I’ve found that [leadership] is one of my strong suits,” Clyde said.

AIAA was not the only club impacted by the pandemic. Clubs with active engagement could not run as they used to due to strict COVID-19 protocols, said Jerome Budomo, associate director for student life and advisor of the SGA club affairs committee.

“It’s a systemic issue,” he said. “It’s that knowledge gap—how do you teach something that [students] have never been taught before and they haven’t seen for the past two to three years?”

Learning how to run clubs was difficult during COVID 19. Previous club-runners carried institutional knowledge with them when they left the University, with social distancing restricting upperclassmen’s ability to pass the torch, Budomo said.

Many new leaders had to start from scratch, relearning the ways of clubs and how they worked. This opposes challenges. However, the members of AIAA had a plan for growth and recruitment.

Reviving AIAA was not as easy as it seemed, Clyde said. Being a student herself, running the club was a balancing act.

“I’ve found that many students don’t even know AIAA exists,” she said.

In an effort to recruit more members, Clyde turned her focus towards public outreach. She attended the CEMS club fair, reached out to professors about lab clearances and urged anyone interested in aerospace to participate.

Club membership and retention is not the same for all clubs, Budomo said.

Student organizations allow students to find their place on campus and build connections with those around them, Budomo said. An inclusive and safe environment is needed for students to feel welcome and join clubs.

With AIAA being a smaller club, participation is key, Clyde said. But the club does not fit into everyone’s schedules.

“A big challenge is people wanting to be members and they can’t be, so I give the option to email and work something out from there,” she said.

With a focus on physical design and engineering projects, being able to have fun and apply knowledge to real world problems is important to the club, Clyde said.

“We hope to get a lot of freshmen involved,” Frigo said. “Getting students to actually work on projects where you can see what you’re learning in class be applied is probably going to help more than anything.”

Hoping to be able to experience an alternate way of engineering through projects as opposed to lectures, first-year and club member Eli Swanson finds the design process a bit more enjoyable, she said.

With much of the project’s responsibility in the hands of the passionate club members, Swanson is hopeful for the future of AIAA.

“I think [AIAA] will be alive as long as there are people who are passionate about aeronautics and astronautics,” Swanson said.

Having worked with AIAA in her high school years, Swanson describes the club as a passionate community with knowledgeable students excited to learn and grow. Due to the club’s smaller scale, she feels she has more control over projects, she said.

Though an optimistic future is in sight, many club leaders are approaching graduation, leaving the fate of the club in the hands of its current members.

“I’m hoping that in the next year, the leadership will be passed down to one of the current members of AIAA,” Clyde said.

Running a club takes immense responsibility, so finding the perfect fit can be difficult. Still adjusting to college life, Swanson said time management is a major factor which deters her from taking over, though she may be prepared in later years, she said.

Post-pandemic, UVM club engagement is at one of its highest points of all time and student involvement has skyrocketed, Budomo said.

“Five or six new organizations have been recognized and there are still more in queue,” he said. “There is a hunger for involvement.”

Clyde remains hopeful about the future for AIAA, she said.

“They’ll be able to take [the club] to a bigger scale,” she said.

Since large-scale projects could not be done in recent years due to the onset of COVID-19 as well as a lack of members, AIAA is looking forward to the growth of the club, Frigo said.

“I hope [AIAA] will maybe try to put stuff into low orbit with NASA,” he said.

As the year continues and she approaches graduation, Clyde has a message for those who are interested in space and engineering.

“Even if you think your major doesn’t fit, we’ll find a spot for you,” she said.