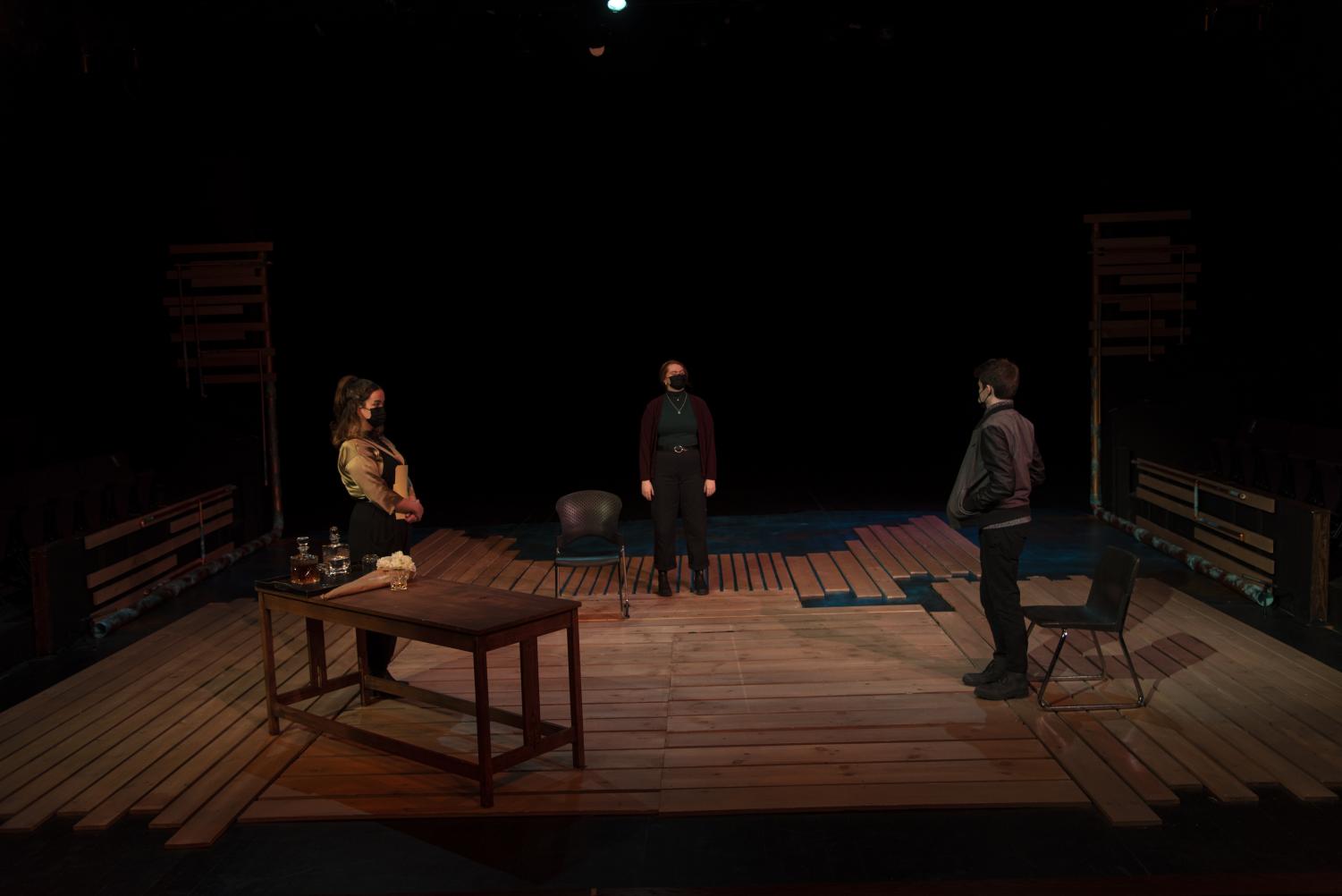 Actors rehearse for their upcoming performance of An Enemy of The People in the Royall Tyler Theatre March 17. The play was live streamed March 18-20 and there was limited in-person viewing. (Allison Ouellette)

Actors rehearse for their upcoming performance of An Enemy of The People in the Royall Tyler Theatre March 17. The play was live streamed March 18-20 and there was limited in-person viewing.

As the main lights dim, the only excitement filling the Royall Tyler Theater is from the actors, director and stage crew. The hustle and bustle grows backstage, as the company prepares to perform in front of a ready crew of cameras in an empty auditorium.

This weekend the UVM theater department put on their first performance since the start of the pandemic. “An Enemy of the People” adapted by Brad Birch, premiered on March 18 and ran through March 20 for a live streamed audience.

The play is about a geologist who discovers a dangerous chemical in the water of a small Norwegian town and struggles with going public with the information. The play was directed by theatre professor Sarah Carleton.

Part of the reason Carleton selected “An Enemy of the People” was because of its potential to be performed in a way that conformed to all of the necessary COVID-19 regulations. It also tackles themes that are currently very relevant, including corporate greed, environmental issues and the power of the press.

“I was looking for a play that would create great opportunities for students, but not have crowds, so limited bodies on stage,” Carleton said. “I also wanted to do something that could resonate with sort of what’s going on in the world today.”

Junior Maddie Barnes played Petra Stockmann, the daughter of the show’s protagonist. As a theater and studio art double major, Barnes was thrilled to have the opportunity to do the thing she loves again.

“It’s been a really long time since anyone has been in the space rehearsing and doing scene work, or being able to interact with other people in person, so I’ve been really grateful for it,” Barnes said.

Like many students, Barnes has been feeling the increased stress and fatigue caused by COVID-19. Although she was worried about the production only multiplying that stress, theater has been a refreshing break.

“A part of me was like, I really hope that this is not just another thing that tires me out or stresses me out, but it’s become something that I can still have fun with and be passionate about like I used to be,” Barnes said.

The performing arts have been hit especially hard the past year, Barnes said. This is partly because of the logistics of theater and partly because it is not prioritized at the University.

“The focus of where the money is going right now isn’t necessarily in the humanities or in the College of Arts and Sciences. I think the pandemic has definitely affected the arts in probably a more negative way,” Barnes said.

Such a big part of theater is collaboration, according to Barnes. Engagement between the cast, crew and audience are the foundation of the performing arts. But the ability to interact with the directors and professors in the theater department is one of the things she missed the most, she said.

Carleton said that the pandemic has left a lot of creative people without their livelihood — not to mention their source of income.

“It has decimated the arts. You know, so many people in the business, actors, directors, wardrobe, designers, technicians have literally had their work taken away from them for a long time,” Carleton said.

In order to comply with COVID-19 regulations, actors were masked and six feet apart throughout the entirety of the play. There were also only a few people on the stage at a time, and limited props to avoid multiple people having to touch the same surface. Limited props were not necessarily a bad thing, said Carleton.

“I think we tend to forget how beautiful and pure just the actor and the story telling is, you know, the impact of what theater really is,” Carleton said.

After being dormant for such a long time, the performing arts have slowly started to come back and Carleton is confident they will come back with a bang.

“I think there’ll be a kind of renaissance,” Carleton said. “I think there’s going to be renewed energy and vitality in the work, because everything’s been shuttered for so long, and I’m looking forward to that reverse of something.”