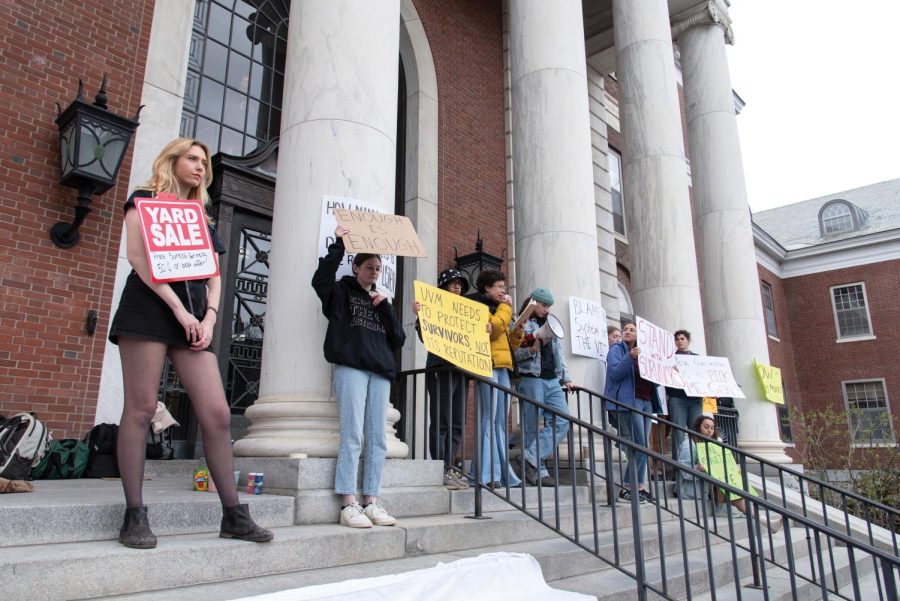 An Explain the Asterisk walkout at the Waterman building April 27. (Mary McLellan)

An Explain the Asterisk walkout at the Waterman building April 27.

What does it mean to Explain the Asterisk?

At UVM, there is no difference between the appearance of an academic transcript for a sexual predator and that of someone who was caught plagiarizing, said Syd Ovitt ‘21, founder of the first chapter of Explain the Asterisk.

Explain the Asterisk is an organization advocating for detailed academic notation of sexual violence on the college transcripts of abusers at the federal level, Ovitt said. New York, Virginia and Texas have laws that require detailed transcript notation of sexual assault as a reason for a student’s dismissal.

Though founded by Ovitt when she was a UVM student, ETA gained its momentum as a national organization because universities across the United States were seeing massive protests when sexual assault cases rose, similar to what UVM experienced in spring 2021, Ovitt said.

“In the spring of 2021 there was this domino effect of people coming forward and basically just offering our support,” Ovitt said. “That’s how people discovered who [ETA] is.”

ETA is a national organization now and part of its main focus is targeting policy and legislation, said Emily Stanley, ETA chapter leader at SUNY Plattsburgh.

“Having chapters nationally really helps bring light to the issue that many states don’t have the legislation to hold perpetrators accountable,” Stanley said. “That isn’t just a small issue at one college—it’s an issue within the whole system of colleges.”

The various campus chapters of ETA are a great way to reach more states, Ovitt said.

“When I started going to school at Plattsburgh, I would go to the meetings but I really wanted to have more of a leadership role within ETA,” Stanley said. “I guess it’s just something that I think is important and needs more awareness, I felt really passionate about being a part of it.”

There had been different people advocating for similar issues, but Ovitt started the actual campaign, she said. It started as a Change.org petition in winter 2018 and has since grown into a national organization with 13 chapters across the United States.

“I have not met someone that has had a good experience reporting to Title IX, the process sucks,” Ovitt said. “You go in, and you can have someone come with you, and you say what happened as they tape it. The investigator asks questions, and that is your initial report.”

After the initial report, there will be back and forth as both the party reporting the incident, and the party against which the complaint is lodged, talk to the office, Ovitt said. As these conversations happen, the office sends both parties a no-contact order.

“They scheduled meetings with both me and the guy so that we would be crossing paths on the way to the office which was so fucked,” Ovitt said.

The person Ovitt accused hired a lawyer, so his lawyer would be sending questions to the office, she said.

“What was messed up was my investigator told me not to seek legal counsel even from the student legal center,” Ovitt said. “It’s such a privilege to be able to afford a lawyer—and not one that I had.”

Revisiting what happened was one of the hardest parts, Ovitt said.

“They don’t really give you any resources,” Ovitt said. “I was at my summer job and got the letter that said ‘we did not find him responsible’ and that was it. [The Title IX office] is supposed to offer you academic accommodations and they just did not.”

Ovitt struggled with attendance in class during this time, and in order to obtain help from her professors she was made to divulge this personal information about her life, she said. She began researching transcript notation and emailing a vast number of organizations and government officials.

Some of ETA’s goals are to generate accountability for perpetrators and safety for students on campuses and to be advocates for survivors of sexual assault and violence, Stanley said.

“Universities are very worried about their reputation and they have certain interests that they need to protect, that sometimes interfere with the justice of survivors,” Stanley said.

“I feel like the biggest thing we always try to portray is obviously everyone deserves to get an education,” Ovitt said. “I think education is the biggest form of prevention that we can really have, but also there has to be that accountability aspect. It’s a difficult balance to have.”

In a perfect world there would be therapy, counseling and resources for people, she said. Insufficient sexual education prevents adolescents from learning sexual violence prevention at an early age.

“My health class [in high school] was about STDs and obesity and that was it,” Ovitt said. “I didn’t even really know what consent was or what it was supposed to be until I got into this work my freshman year [of college].”

The overarching purpose of the club is to create a better environment for students, said junior Ethan Rances, UVM ETA chapter president. Raising student awareness over the issue of sexual violence on college campuses is the UVM chapter’s main mission.

“Many universities, including the University of Vermont, are not giving this awareness to students, [and] we are trying to fight that,” Rances said.

Stanley organized a walkout during sexual assault awareness month in April 2022, she said. This is the first large demonstration the ETA chapter at SUNY organized.

“It’s really good to bring people together that are passionate about something,” Stanley said. “I feel like a lot of the time people care about issues, but they don’t really have an outlet where they can put action into it. For me, being a part of Explain The Asterisk has felt like I can actually put myself into action.”

On college campuses, there is a culture of acceptance and tolerance towards sexual assault and sexual harassment, Stanley said. The SUNY ETA chapter talks a lot about fraternities and sororities and how the culture of fraternity and sorority life can contribute to sexual misconduct.

The legislation that New York has for transcript notation is what Ovitt would like to see in Vermont, she said.

At UVM, the community outrage around sexual violence has seemed to die down, Rances said.

“As of right now, we have seen a bit of a decline in interest in fighting for sexual violence awareness and things like that because there haven’t been many actual [reported] cases of anything,” Rances said.

It was easier for people to talk about their experience with sexual violence last year when a lot of people were coming forward at once, Rances said. It is hard for people to draw attention to themselves individually without that community support, making outreach for ETA difficult.

Rances runs the chapter’s Instagram page and tries to get people in Vermont, specifically in Burlington and at UVM, involved in the mission of ETA, he said. He has been trying to reach out to Champlain College to get students outside of UVM more involved with ETA’s mission.

“ETA is on its second wind,” Rances said. “I think that we’re kind of trying to get the ball moving again. We have been kind of lackluster on our social media pages, I know I’ve been trying to do weekly to bi-weekly posts. Within a coming couple of months, we’re going to try and really get the ball moving to keep ETA [at UVM] in the realm of social media awareness for students.”