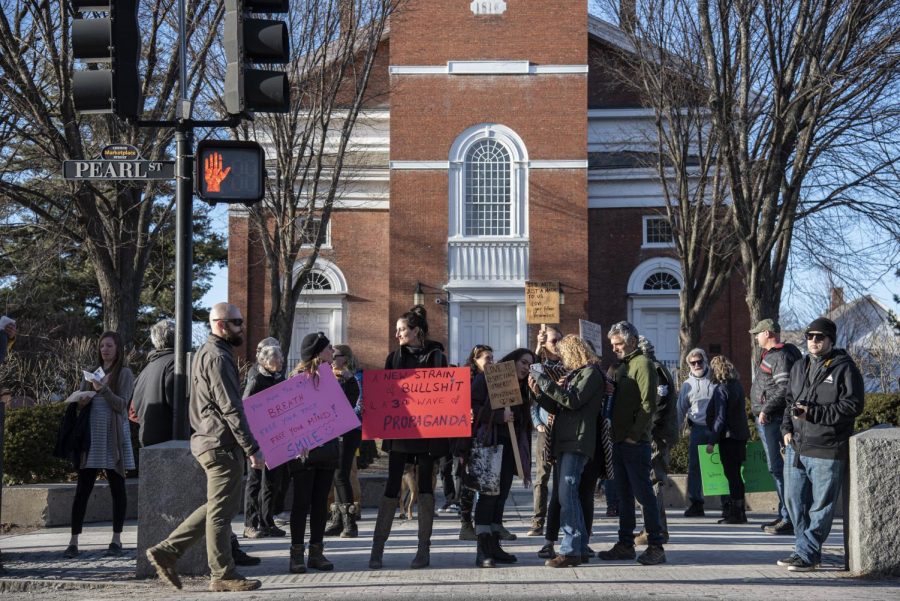 Members of Vermonters Against Unconstitutional Lockdowns and Tyranny, also known as VAULT, gather on Church street for an anti-mask flash mob that began at 5:30 p.m. March 20. The flashmob met at 1 Church street and proceeded to walk down towards City Hall.

Roughly 30 anti-mask protestors gathered on Church street March 20 to protest the state’s guidelines regarding masking. The group paraded up and down Church street as pedestrians backed up to the walls of the surrounding shops to avoid coming into contact with the unmasked protestors.

The group met on Pearl Street and began their march towards City Hall. Several protestors brought their children.

“Our goal is personal freedom,” said one of the protestors.

“The labeling of people who are anti-mask, the media who’s told you that they’re all racist. I’m wearing Birkenstocks. This is from anthropology. I don’t look like a racist,” said another.

A smaller group of Burlington residents gathered in front of City Hall to hand out masks, water bottles and snacks in a counter-protest effort.

Below is a photo essay depicting the reactions of the protestors, counter-protestors and masked residents of Burlington.