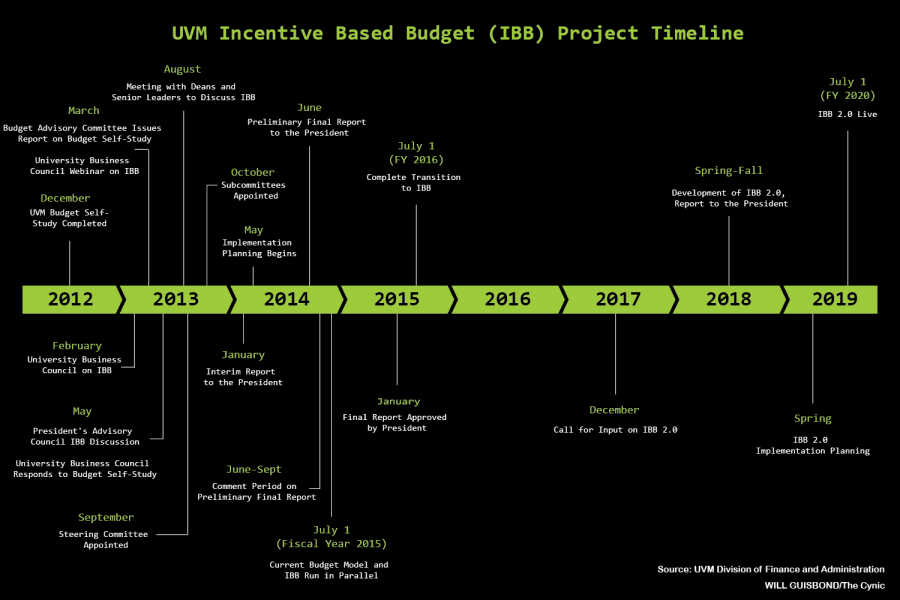 UVM has been grappling with the development of a new budget model for years, and now the community’s concerns about the model’s lack of prioritization of the liberal arts have come to a head.

UVM transitioned to Incentive Based Budgeting in July 2015 as an attempt to transparently redistribute the financial power of the University. However, this approach is being cited as a reason for the budget deficit in the College of Arts and Sciences.

“Some of the primary reasons for that concern were that IBB and other models like that are known for increasing competition between departments, schools, programs and majors, and decreasing collaboration and interdisciplinary research,” Roberts said. “In fact, that really has been what’s happened.”

The IBB model was introduced by former Provost David Rosowsky and approved by former UVM President Thomas Sullivan in July 2015 after being run in parallel with the former model beginning July 2014.

Before IBB, UVM operated on a centralized budget, and decisions were made by the President and Provost of the University and approved by the board of trustees.

David Daigle, former Chair of the board of trustees at the time IBB was approved, was contacted but was unresponsive.

In 2018, UVM College of Arts and Sciences cast a vote of “no confidence” in Rosowsky after frustrations about IBB’s impact on the liberal arts emerged.

Rosowsky was contacted several times but did not give a comment on his role in developing IBB.

The goal of IBB is to hand off both funds and expenses to colleges in amounts determined by how much they make and spend, according to the UVM IBB webpage. The more revenue they bring in, the more money is put back into them.

The IBB model identifies aspects of revenue that a college brings in, such as tuition, as well as costs they spend in the University such as classroom and lab space, technology and salaries.

According to a May 6 post on the Provost’s website by Provost Patty Prelock, a working group was organized in 2016 to identify and measure concerns of the UVM community about IBB, including adverse effects to class sizes and collaboration between disciplines.

Prelock’s post also addressed the CAS deficit, stating that the majority of CAS’s revenue comes from net tuition while other colleges generate more of their revenue from other sources such as research.

CAS has a growing deficit, and has received $78.6 million in additional allocations from the University over the last ten years, according to the post.

The model gives both revenues and expenses directly back into the units that generate the revenue, according to the IBB information page.

The CAS deficit was primarily the result of a considerable contribution into the subvention fund, a 40 million dollar fund taken out of undergraduate tuition revenue, according to Joe Kudrle, treasurer of United Academics.

Kudrle said through his analysis of the fund, he calculated that CAS contributes about 45% of that fund from its undergraduate tuition revenues.

However, the University does not recognize that as CAS revenue, but as University revenue, because subvention is taken out of undergraduate tuition prior to money being put back into the colleges.

To me, it’s really tricky accounting that they’re doing to get around saying that this money is linked to any individual college or school on campus”

“To me, it’s really tricky accounting that they’re doing to get around saying that this money is linked to any individual college or school on campus,” Kudrle said.

“If you have one group that’s making a lot of money and you want to cover others that aren’t that’s fine, but then to penalize the group who’s not making enough money to cover everybody else seems to take it one step too far,” Roberts said in reference to recent CAS cuts.

In fiscal year 2020, CAS contributed over 17 million dollars into the subvention fund and received over 8 million. The Larner College of Medicine, in comparison, contributed about 1.5 million and received almost 14 million.

IBB is an inclusive and transparent three-year process dating back to an extensive examination of UVM’s budget in 2012 highlighting limitations of the prior budget model, Rosowsky stated in a 2017 letter to the Cynic.

The previous model had a total operating budget of $601 million, divided into three sections: the general fund, the restricted fund and the income and expense budgets, according to the 2012 examination report.

The general fund was for the University’s day to day expenses, and made up almost 50% of UVM’s budget.

The restricted funds are composed mostly of grants and contracts that could only be spent for a designated purpose. The Income and expense budgets funded over 200 accounts including residence halls and the University store.

IBB was developed in 2014 to combat the problems of the former budget model, which included “lack of transparency, little flexibility and few incentives,” according to the IBB webpage.

In a 2013 letter to UVM staff, Sullivan stated that he had asked Rosowsky to lead the development of an IBB model for UVM and chair a committee to evaluate a new budget plan.

After Sullivan arrived at UVM in 2012, he had encouraged discussions about UVM’s budget model, and heard many concerns about funding distribution, he stated.

“We heard about problematic issues associated with our existing budget process: lack of transparency, too much complexity, little flexibility and too few incentives for units across campus,” the letter stated.

However, IBB is not as transparent as it was aimed to be, said Roberts.

Probably only ten people on campus understand IBB,” Roberts said. “It seems to me that it’s impossible for something that is so hard to understand to be truly transparent.”

“Probably only ten people on campus understand IBB,” Roberts said. “It seems to me that it’s impossible for something that is so hard to understand to be truly transparent.”

Kudrle said that he does not believe IBB is a bad model, but the pressures it puts on deans and department chairs creates a lot of stress.

Some faculty outside of CAS value IBB and the benefits it has for their programs.

“CEMS has been able to invest in faculty hiring, student programming, student research, laboratory equipment and infrastructure in ways that were not possible before IBB,” said Linda Schadler, Dean of College of Engineering and Mathematical Science.

Schadler was an external hire and became Dean in 2018, years after IBB was implemented.

“IBB has allowed us to find ways to be efficient,” Schadler said. “It’s really allowed us to improve the quality of the education we provide.”

Although it’s not perfect, IBB has overall been a positive change for the University, Schadler said.

“It has highlighted the areas where we need to focus,” Schadler said. “Overall, it has helped the University to better support students and invest resources wisely.”

The IBB steering committee continued to meet after the model went live in order to assess the model’s performance and impact, and underwent review during 2017, according to UVM’s IBB website.

That major review concluded with the development of a second IBB model in 2018, according to Rosowsky’s 2018 report.

“College of Engineering and Mathematical Sciences has had a big increase in the number of students,” Schadler said. “The funding has increased and we’ve been able to hire the faculty to support that increase.”

Planning for the implementation of IBB 2.0 began in spring 2019, and went live that July.

IBB was originally presented as requiring each college to make enough to cover its own costs, Roberts said.

“What I didn’t realize was it wasn’t as simple as that,” Roberts said. “Once the money went to a central place, it would be reallocated according to the priorities of the University administration.”

“IBB makes us more aware of the decisions we’re making and the impacts,” Schadler said. “This is probably a good thing and I don’t think it has stopped collaboration.”

Under the old budget model, hiring decisions were made by the Provost. IBB was presented as bringing those decisions down to the level of the schools themselves, but Roberts said this did not happen.

“It was supposed to be that the deans could make that decision because they would know what they had in terms of money coming in,” Roberts said. “The model that we’re running now has all of the disadvantages of IBB, and none of the advantages.”

Bill Falls, Dean of CAS was contacted but declined to comment on the impact IBB has had on his college.

Schadler said she finds it unfair to blame a budget model for the University’s financial situation.

“That seems like a pretty fair thing to me,” Schadler said. “All the same dollars are there.”

Kudrle said that although it is expected that some units will help cover others, it is illogical to penalize a college for not making enough money to continually give more and more to other colleges on top of covering itself.

“I think it is a little unfair, because if the subvention was completely eliminated and all that money went back into the units in which it came from, then that would be a different story,” Kudrle said.