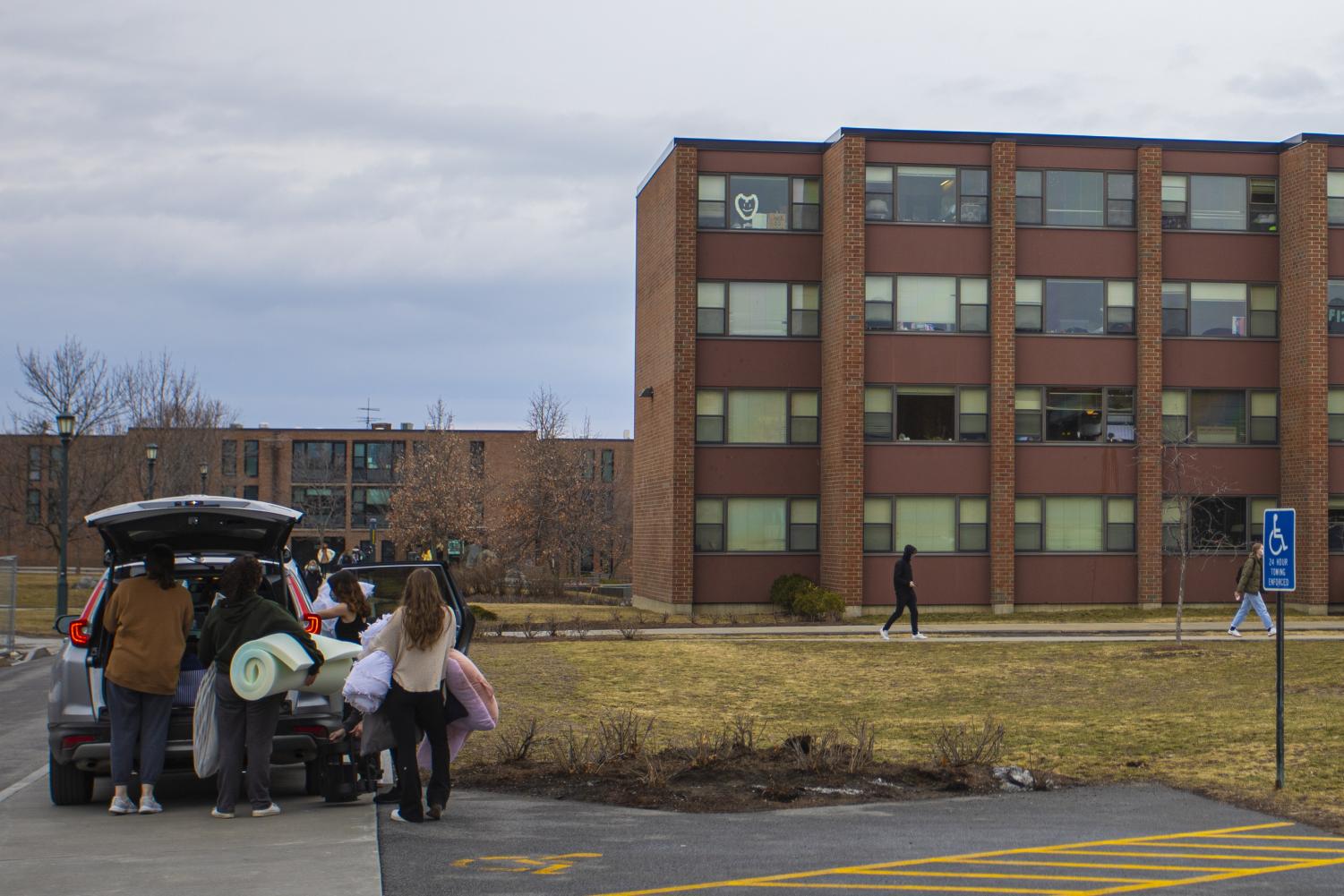 Students pack up their dorm belongings outside Harris-Millis Hall March 18.

After sharp increases in the amount of weekly COVID-19 cases on-campus in late February into early March, UVM administration enacted a series of harsher penalties for student conduct that violated the school’s coronavirus-specific policies.

According to a Feb. 25 email to students from Gary Derr, vice president for public safety, the new, elevated sanctions put in place included all violations of COVID-19 related policies — except for a first missed COVID-19 test — and would be reviewed for suspension.

Almost immediately, students on and off-campus began to feel the impacts of new policies.

But, after backlash from students, UVM reversed course and rolled back the elevated sanctions on March 25. Yet tensions among students remain high, with one student petition garnering over 3,000 signatures.

Data compiled from a March 29 Cynic survey with 215 responses showed that nearly 35% of student respondents believe increased sanctions and attention to student conduct have made their time at UVM “unbearable.”

One student the Cynic spoke with said she was struggling with suicidal thoughts in fall 2020 and sought out help from UVM Counseling and Psychiatry Services.

When she called, staff at the center told her they were fully booked until March 2021 and were unable to provide her with services, she said.

The student said she was instead directed to the National Suicide Prevention Hotline.

“When I called they told me they were understaffed and overbooked—it was a whole mess,” she said.

As more students have voiced their struggles with mental health issues over the past few weeks, signs have gone up around campus encouraging students to stay positive.

One states students should “try drinking some water, moving your body, and getting some rest.”

Another sign reads “we will make it to the end of the semester, together” and states that “hammock weather is coming.”

UVM officials have also sent emails to students inviting them to CAPS sessions with counselors.

Despite these communications from administrators, many students are still struggling to cope with UVM’s increased sanctions, voicing feelings of fear and abandonment.

“I am so much sadder than I thought I would be. I follow the rules because I’m scared of losing my scholarship, without that money I can’t go here,” stated one respondent to the Cynic’s survey.

The respondent said it’s difficult hearing the University say things are going to get better, but then making no changes in policy.

“They are the ones preaching about following the science, but refuse to let students gather,” another survey respondent stated. “UVM is fostering mental illness.”

Despite the fact that the Center for Disease Control has released guidance allowing vaccinated individuals to gather, UVM has maintained that its requirements on campus remain unchanged, regardless of vaccination status.

However, UVM’s guest policy that prohibits any student—even with a mask—from visiting another student in their room still remains unchanged.

When asked about providing resources for struggling students in light of the survey responses, UVM spokesperson Enrique Corredera also pointed to CAPS’ availability.

“We want to remind students about the mental health and support services the university offers. CAPS appointments are open and available,” he stated in an April 1 email.

In addition to the continued mental health struggles students are experiencing, they also remain confused about what UVM’s COVID safety and conduct policies currently are.

Despite the Feb. 25 email announcing increased sanctions, a March 14 email to students from President Suresh Garimella walked the decision back.

“Understanding the anxiety, loneliness and stress our students have been feeling, I asked our Dean of Students and his team to review all recent cases of suspension,” the email stated.

UVM has since quietly edited its suspension policy, announcing it to students at the bottom of a March 25 Return to Campus weekly newsletter.

“While 96% of students do not have any type of sanction, we learned the disruption caused by elevated sanctions outweighed the benefits for our community,” the email stated.

It also stated that the University has modified its framework for handling violations, but did not specify what that modification was in the email.

According to the UVM website, suspension is no longer being used as punishment for a first offense of the Green and Gold Promise.

But during the month that the suspension policy was in place, many students felt its effects.

A total of 515 students have been sanctioned so far this semester, UVM spokesperson Enrique Corredera stated in a March 30 email.

The data he provided shows there were more students sanctioned last semester than this semester on average, despite the higher case count this spring.

The entirety of the fall semester yielded 99 positive COVID-19 cases, while this semester has had over 400 thus far, according to UVM’s COVID-19 dashboard.

However, confusion remains among students.

“We fully recognize the impact this has had on our community and are eager for more normalcy in our interactions. However, given our very high case counts, we must remain vigilant and adhere to the Green and Gold Promise,” Corredera stated in the same April 1 email.

“I was expecting some sort of e-mail from the school about it but they haven’t said anything about the rules one way or another,” they stated.

Before the change to the suspension policy was reversed, some students spoke out through a change.org petition challenging the use of immediate suspensions and suggesting that the COVID-19 policy had taken a serious toll on student mental health.

“Since students have returned to UVM in Spring 2021, they have been placed in strict and inhumane living conditions,” the petition states. “New regulations have not only been costly to the school but also catastrophic to the mental health of their students.”

The petition, which has over 3,800 signatures, calls on UVM to find a better system so students can still socialize in a safe way.

“It is unnatural and inhumane for students to be anxious, depressed, isolated, with nothing to do and nowhere to go,” the petition states. “Whether that is being able to socialize with students who live in their same building, masked up, or even make room contact with doors open to show that masks are worn and distance is being made, there needs to be a change.”

One parent stated in the comments section of the petition that “I’m signing because my daughter calls home crying with loneliness.”

Another student’s comment said “I am extremely lonely and anxious. Students clearly are not the priority here…”

First-year Michael Rogan created this petition after the suspension policy hit close to home for him and his friends.

Looking to escape the stringent rules and isolation, a group of his friends put themselves up in an off-campus hotel room for the night, Rogan said.

Although Rogan was not present, he said everyone who was there later received a suspension for participating in an unsanctioned gathering. Photos from social media were reported to the school by another student.

“They really thought they were abiding by the Green and Gold Promise because it was off-campus,” Rogan said. “Although looking back, it probably wasn’t the best idea, there were no bad intentions. They weren’t trying to be sneaky.”

Students must “follow physical distancing guidelines (at least six feet of distance and limitations on numbers of individuals gathering in a common location) both on and off-campus,” according to the Green and Gold Promise.

Following Garimella’s announcement, Rogan said some of his peers have been contacted and will be allowed to take classes from home and keep their scholarships for future semesters at UVM. Others have been invited back to campus, albeit under probation.

However, not all students agree with the frustration expressed in the petition.

“When I read through the Green and Gold Promise, it felt very reasonable to me considering the circumstances,” first-year Sabi Ward said.

Many of the complaints in the petition were exaggerated and came across as entitled, Ward said.

“It’s not fair for out-of-state students to come to Vermont and expect to do whatever they want with no regard to the local community,” said Ward, who is originally from Middlebury, Vermont.

“I don’t understand why students are upset when there are now real consequences for violating an agreement they had to sign in order to come here,” she said.