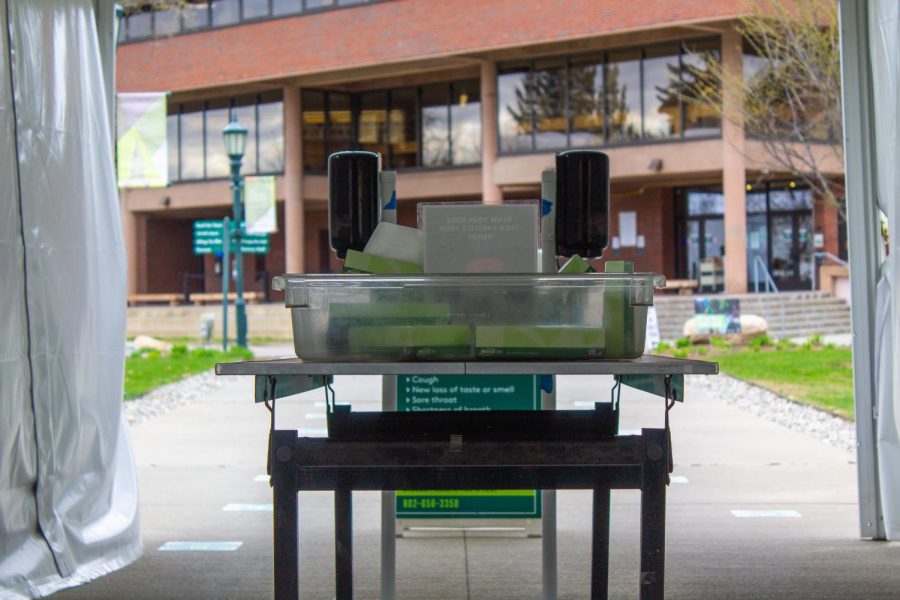 Tissues and hand sanitizer sit on the table in the Covid testing tent April 12.

This is the first time UVM will not require Day Zero tests following an extended break since the pandemic began, according to UVM’s return to campus updates. Last year students did not return after Thanksgiving break, according to the UVM Restart Plan.

Excluding students who did not fill out medical or religious exemption forms, 100% of UVM students are fully vaccinated, Derr stated in a Nov. 19 email. Unvaccinated students need to  test every seven days.

“If you go to a gathering of your friends, and somehow either there’s somebody [who] is vaccinated and has it or unvaccinated has it and you get it, it’s likely that you will have very, very mild symptoms there,” Derr said. “I think we will probably see cases after break.”

As of Nov. 19, Vermont has the most vaccine doses administered per 100,000 residents. Massachusetts, Connecticut, Maine and Rhode Island make up the rest of the top five states, according to CDC Data.

The states with the fewest doses administered per 100,000 residents include West Virginia, Idaho, Alabama, Mississippi and Wyoming, according to the same data.

However, almost every state has a high rate of community transmission, according to the CDC’s Level of Community Transmission data, as of Nov. 19.

The CDC defines high community transmission states as those with over 100 new cases per 100,000 residents in the past week, or states where the percentage of positive tests exceeds 10%, according to the website.

Derr said he remains confident the highly vaccinated student population will protect against any serious threat from COVID-19.