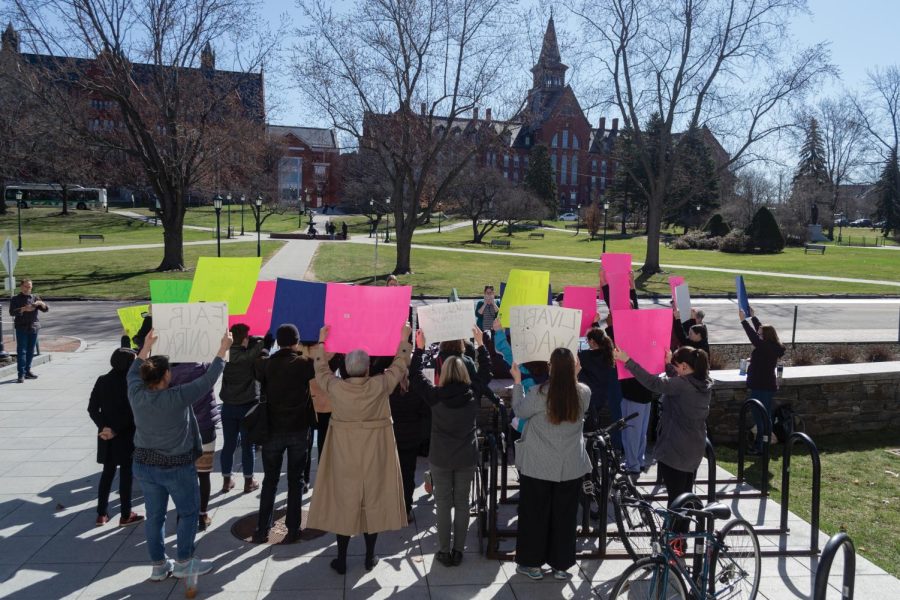 UVM students and staff protesting outside of the Waterman Building April 11.

“I’m here today to say we, as legislators, value the work that [staff] do,” Balint said. “We value that, without you, there would be no UVM. So, today I’m going to ask administration [to] meet in good faith with [the union], help them get a contract that allows them to keep being Vermonters here in our communities.”

Balint believes in supporting the union workers as Vermont community members who deserve a reimagined workforce with better pay, she said.

Ram Hinsdale, who once served as SGA President,  supports the union because of her personal history with the University, and because she believes no one should make wages that cannot support their cost of living.

A liveable wage differs depending on where an individual lives – it’s a wage that allows a worker to meet their basic needs, according to a June 5, 2019 New York Times article. Minimum wages typically coincide with federal poverty guidelines.

“When I say that the UVM staff raised me, I absolutely mean it,” Ram Hinsdale said. “I [know] staff at UVM that have said, ‘I know I could go to Boston or elsewhere and make 10 [or] 20,000 more dollars doing the same job,’ and that crushes me.”

Colburn, who also works as the assistant to the dean of libraries for external relations, supports the union because of how much staff worked to support the University’s functioning during the COVID-19 pandemic, she said.

“We need to really recognize the critical role that staff have played for all time, but especially for these last two years, in just lifting us all up and keeping this place afloat and keeping these doors open,” Colburn said.

UVMSU represents 1,350 staff members, many of whom make less than $20 an hour and have second jobs or food assistance to afford to live in the area, said Ellen Kaye, UVMSU bargaining team co-lead negotiator and Howe Library cataloger.

“Every day that we don’t have a contract, we lose valued staff members who simply can’t afford to work here,” Kaye said. “UVM needs to do better. It needs to show that it values us.”

Wages also stagnated, with many staff members making less than they did in 2017, Kaye said.

“We continue to negotiate in good faith with UVMSU,” stated UVM Spokesperson Enrique Corredera in an April 12 email. “UVMSU and UVM agreed through ground rules that our negotiations should be private. We respect that agreement, and will not comment on the details of negotiations at this time.”

UVM Staff United will host a rally at noon April 15 outside Howe Library, where staff members, students and community members are encouraged to show support, said Annie Valentine, UVMSU bargaining team member and education and training manager for the Center of Health and Wellbeing.