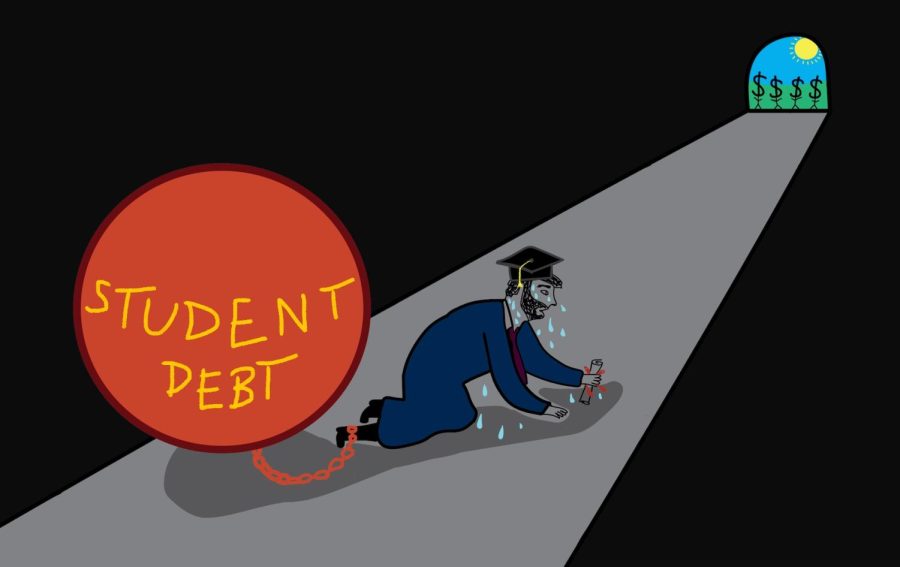 This August, the Biden Administration finally followed through on its campaign promise to cancel a portion of student debt for low- to middle-income borrowers, according to an Aug. 24 New York Times article.

While this student loan forgiveness policy is a step in the right direction, it is simply not enough and is merely a Band-Aid solution for a much greater systemic problem.

Student debt is the second largest source of consumer debt after housing, according to a Feb. 16, 2018 Brookings Institution article. Today, total federal student debt amounts to nearly $1.4 trillion, and the number of graduates who are $50,000 in debt has tripled since 2000 from 5% to 17%.

Furthermore, nearly one million borrowers were at least six months behind on their student loan repayments before the pandemic, according to a March 21 LinkedIn article.

This data goes to show that loans are inherently predatorial, taking advantage of students who for the most part have little understanding of interest rates, let alone the consequential terms and conditions.

Pell Grant recipients will receive up to $20,000 in forgiveness, according to the briefing. While these grants used to cover 80% of public university costs, they only cover 30% today.

In addition to student loan forgiveness, Biden will extend the repayment pause through 2022 and also restructure the repayment system as a whole, according to an Aug. 24, 2022 U.S. Department of Education press release.

The current federal student loan program automatically enrolls students in the “Standard Repayment” plan, which consists of fixed payments over a 10 year period, according to a 2015 National Association of Student Financial Aid Administrators report.

In addition, alternative plans are available to meet a variety of financial circumstances. However, borrowers face unnecessary obstacles when trying to take advantage of these options.

For example, borrowers must first assess each plan, fill out paperwork and provide income verification as well as ongoing proof of eligibility, according to the NASFAA report.

Not only must borrowers navigate an overwhelming amount of resources to determine which plan will better suit their financial needs, they then must apply through a tedious enrollment process which can turn them away altogether.

Biden’s proposed debt-relief plan will simplify the repayment process by automatically enrolling borrowers in either a “single income-based” or “standard” repayment plan, according to the report. This way, borrowers can skip the loopholes and instead consolidate a first-hand plan that works for their individual finances.

Overall, Biden’s program will benefit nearly 43 million Americans, granting them the financial room to build wealth rather than subjecting them to years of swallowing debt and unreasonable monthly payments, according to an Aug. 24 National Association of Counties article.

With this financial opportunity, borrowers will get a chance to invest in themselves and their local economy. They will finally get to buy homes, start families, save for retirement and even invest in their own businesses.

Biden’s student loan forgiveness plan is a step in the right direction that will help numerous students and families. However, the plan is a short-term fix-all and is indicative of much greater issues that need to be addressed in the U.S.

We cannot ignore that a college education is no longer affordable for the average American. Since 1980, the cost of four-year public and private colleges has increased 169%, according to a Nov. 2, 2021 CNBC article. Meanwhile, the overall median household income has remained relatively stagnant, increasing by only 40%.

In short, the rich continue to get richer while the everyday American continues to struggle.

With the cost of college rising at such an exponential rate, we unfortunately must consider a college education’s return on investment and ask ourselves if obtaining a degree is worth it.

American students have already responded to these absurd costs with undergraduate enrollment dropping 9.4% since the pandemic, according to a May 26 National Student Clearinghouse Research Center report.

If our country wants to keep its citizens in school and ensure a progressive future, we can no longer ignore that the rising cost of college is both unsustainable and unrealistic.

In response, we must reevaluate our priorities when it comes to higher education and significantly lower the cost of attendance.

While Biden’s student loan forgiveness plan is a good start, it is long overdue and cannot be the sole poster child policy that aims to fix the very complicated and extractive system that is America’s higher education.

We must not ignore the potential of the U.S. education system, and instead reconceptualize a more affordable future. We must acknowledge education as a basic human right, not a privilege, and most certainly not as an opportunity to financially exploit our population.