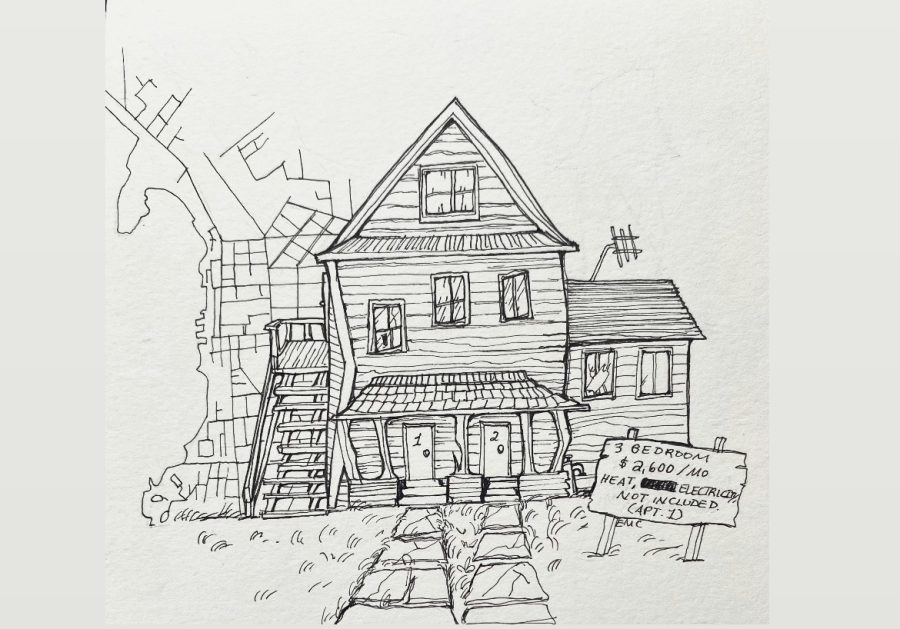 Lack of affordable housing is a harsh reality Burlington residents live with.

The city and state government’s restraint of the market creates does not allow for sustainable growth or building affordable housing complexes.

The city of Burlington reports the average tenant now spends over 40% of their income on rent, according to BTV Housing policy reform.

Families paying 30% or more of their income on housing are considered cost burdened, according to Ask the New York Times.

Spending half of income on housing eats away at money left over for other needs like food, car payments or insurance, leaving little left for activities which the renter enjoys.

Single-family zoning covers almost all residential zones in the Burlington Zoning Map,  according to the 2019 map that gets updated as amended. These zones result in the lack of new affordable housing built in Burlington, the City Council doesn’t allow for it.

Students cram into makeshift apartments formed from old houses as the lack of new apartment building projects tightens the market. The University tries to help through the UVM off-campus housing tool, but options are limited.

Ten year home appreciation, the increase of home price over time, has been at a staggering 44.2%, according to BestPlaces, a website dedicated to being a resource for those looking to relocate.

The medium rent for a one bedroom apartment in Burlington is currently at $1,450, a 4% increase from 2021, according to Zumper, a website dedicated to helping consumers to find apartments.

The City of Burlington is building new apartments for the first time in 20 years, according to a Nov. 1, 2021 WCAX article.

Mayor Miro Weinberger stated the City created barriers to building new housing in the district through their local zoning laws, according to the article.

Housing should not be limited to those who can bid the highest.

Lack of housing causes renters to compete for apartments because there are not enough for them all.

“Exclusionary zoning was designed to racially and economically segregate communities, and today drives up housing costs and erects economic walls around communities,” the 2019  AOC and the Progressive Consensus on Housing stated.

Burlington implements this exclusionary practice through single-family zoning whether it be unintentionally or a genuine attempt at planning the city.

The Burlington City Council and Housing Authority has gutted the capability of the free market through housing overregulation.

Burlington City Council, for the good of the renter, the homeless and those of a low socioeconomic status, must end this practice of market obstruction and allow high-density development for Burlington to increase supply, lessen demand and decrease rent.