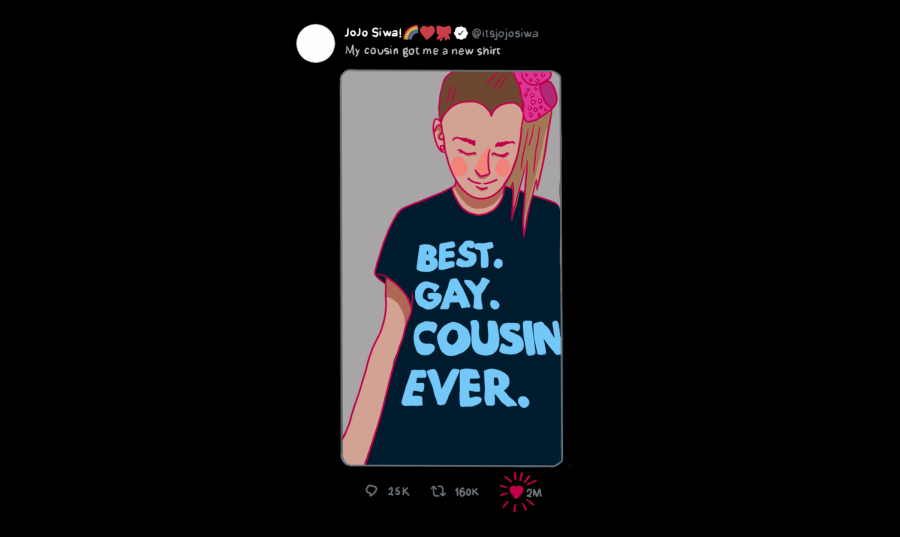 JoJo Siwa is the role model we all need

I used to hate JoJo Siwa’s sparkly outfits, catchy songs and frivolous YouTube videos. Now I love and respect them.

Siwa rose to fame at the age of nine on the popular reality show “Dance Moms” and has since become somewhat of a pop culture icon with her own Nickelodeon show, according to a January 24 USA Today article.

Her loud, bubbly, and very sparkly personality quickly won my heart, along with the hearts of many others.

Siwa’s a contestant on the upcoming “Dancing with the Stars” season and is the first participant ever to be paired with a same-sex partner, according to an Aug. 26 Instagram post from @dancingabc.

At 17, Siwa came out as queer over a series of Instagram posts and TikToks according to an April 2021 People Magazine article.

Lip sinking, “Born This Way,” by Lady Gaga in one of her coming out posts, Siwa quickly became a queer icon.

After coming out, Siwa received an outpouring of love; however, she was not always an admired or respected figure.

People loved to criticize the young star’s work and clothing choices, claiming she doesn’t act her age, according to an April 2020 Insider article.

However, with the immense hypersexualization of youth in the media, maybe Siwa was actually the one acting age-appropriate.

She swapped crop tops for bows and danced like no one was watching instead of pretending she was too cool to have fun.

As she grew older, Siwa kept this image.

Maybe she kept this appearance to appease her impressionable fans. Maybe she simply likes dressing in this unique way; both are admirable in a society that pressures young girls to grow up quickly and devalues individuality.

Siwa takes pride in her identity in all aspects and shows others that they should be too.

As a young celebrity, Siwa has the ability to influence and validate her many young fans, demonstrating the importance of representation.

UVM sophomore Kate Rosenberg says she thinks coming out would have been easier for many if they had seen more representation.

“There were the ‘Good Luck Charlie’ Moms, but still, they weren’t kids,” Rosenberg said.

Growing up, I also don’t remember seeing much, or any, representation of LGBTQ+ characters or child stars in the media.

I know when I see someone who looks or identifies similarly to me, I feel so much validation in myself and who I am, so I can only imagine growing up and not having my sexuality represented.

The presence of LGBTQ+ characters in children’s media can help kids build a frame of reference and has the ability to dismantle stereotypes about the LGBTQ+ community according to a May 2017 Pride.com article.

Through her historic participation in “Dancing with the Stars,” Siwa is leading this change in dismantling stereotypes and giving kids role models they can look up to.

Not only is she giving young kids a role model, but many college students as well.

Siwa is the same age as my fellow underclassmen, so seeing her, a huge child star, come out, she will be able to give many of my LGBTQ+ peers a role model they can really relate to and provide them with the representation they lacked growing up.

Having Siwa on “Dancing with the Stars,” and in the media, gives kids and college students, the opportunity to build this frame of reference and accept others and possibly themselves.