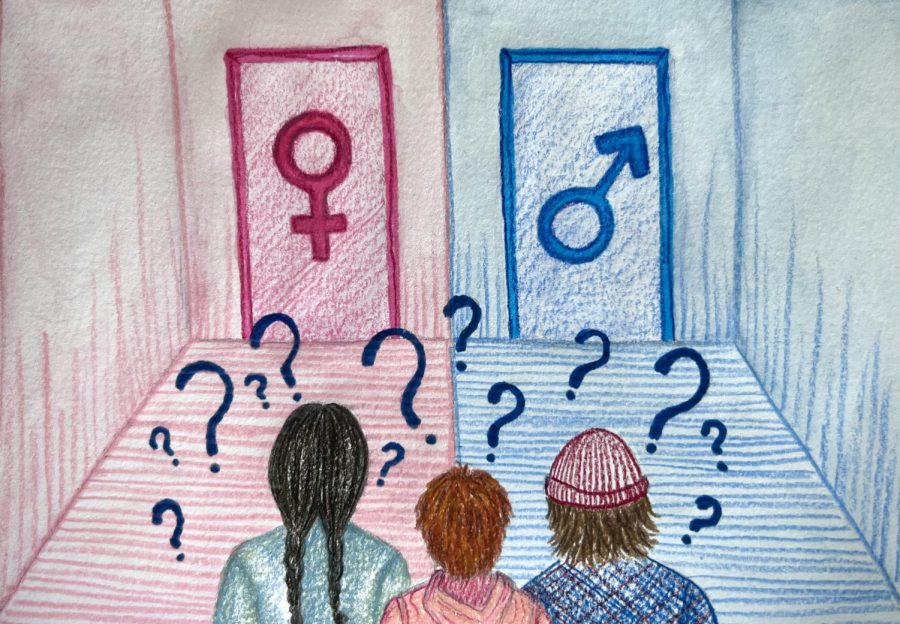 Sex ed should not be gender-segregated

Too often, sex education in schools occurs with splitting the class down a gender binary and teaching the girls about “girl things” and the boys about “boy things.”

This results in generations of children who go into their first sexual experiences completely uneducated on what people of other genders face.

For the sake of fully educating children on reproductive health and eliminating gender identity discrimination, sex education in schools should never be segregated by gender.

I remember when I was first taught about periods in fourth grade.

My class was split into two groups: the girls stayed in the classroom, where we learned about our anatomy while pads were passed around the room as examples, and the boys were pulled into a separate room and taught about what boys can expect when they go through puberty.

This resulted in many of the boys at my school not knowing anything about reproductive health for those who menstruate until they were taught by their high school girlfriends.

The extent of period education for boys in K-12 at my New York public school ended with only the fact that girls simply have a period.

“It was just mentioned casually in health class that girls have periods and only the girls could learn about it,” said Sam Palmer, who went to the same school as me.

Men should not have to rely on their partners to educate them on what the public education system failed to teach them. All genders should be provided a comprehensive period education, regardless of whether or not they have a period, to be able to understand and support those who do.

For many schools, this divide does not end with period education alone—children are often fully segregated by sex for all education on the topic.

In some states, this is even required. In South Carolina, pregnancy prevention information must be taught in gender-segregated settings, according to the Sexuality Information and Education Council of the United States.

This can lead to children growing up without the knowledge they need for healthy and informed sexual experiences.

A 2018 study reported that less than half of high schools and less than one-fifth of middle schools in the U.S. teach key sex education information, according to the Centers for Disease Control.

In my school, sex education was minimally taught, and we learned nothing about the process of intercourse. The knowledge I had was picked up from conversations overheard in the back of the bus and the internet.

This is how we have created a culture of men who don’t know where the clit is. Women were barely even taught about their own bodies—how could we expect men to know if they were never educated?

Separating students by sex can also add to the stigmatization of sex, according to an Oct. 19, 2018 Washington Post article.

Children are not born feeling uncomfortable around other genders, according to the article. This pattern of thinking forms over time based on the environments and attitudes they are surrounded by.

When we normalize talking about sex regardless of gender, we allow children to build the necessary communication skills to discuss sexual health and relationships with their future partners, according to the article.

Building communication skills in regards to sex is essential for establishing consent, which is a crucial part of sex and relationships.

Learning to consider the impact of one’s actions on others and to confront gender stereotypes may decrease the likelihood of sexual violence, according to the CDC.

Segregating classrooms by gender can also be detrimental for children struggling with their gender identity.

When a child is already struggling with feeling different for not fitting into the gender binary or not relating to the gender they were assigned at birth, forcing them into a box to learn about only one gender’s reproductive health could result in feelings of gender dysphoria.

Gender dysphoria is the feeling of discomfort or distress that can occur when an individual’s gender identity is different from the sex they were assigned at birth, according to the Mayo Clinic.

In 2020, only seven states had “policies that include affirming sexual orientation instruction on LGBQT identities or discussion of sexual health for LGBQT youth,” according to SIECUS.

On the contrary, nine states in the same year had policies that require that sex education discriminates against LGBTQ+ people, according to SIECUS.

With 45% of LGBTQ+ youth seriously considering attempting suicide in the past year, according to The Trevor Project, ensuring that transgender students feel safe and affirmed in their school environment is necessary and often life-saving.

If a child does not feel represented in their sex education class, or is actively discriminated against, their mental health may be at even greater risk. Giving all genders access to all information given in sex education is the bare minimum for promoting inclusivity and trans mental health.

Vermont currently requires sex education as part of the state health curriculum, but does not require it to be comprehensive or include information on gender identity, sexual orientation or consent, according to SIECUS. The curriculum must also stress abstinence and information does not have to be medically accurate.

Oregon requires schools to teach sex education that must be comprehensive, recognize different sexual orientations and gender identities, include instruction on consent and be medically accurate, according to SIECUS. This is the standard that all states should strive for.

Comprehensive sex education for all genders is crucial to prepare students to enter adulthood with the skills they need for healthy expressions of sexuality, relationships and consent. We cannot keep important information gender-exclusive without risking sending generations of adults into the world with minimal knowledge on healthy sexual relationships.