A closer look at the demographics of Vermont Cynic student journalists

In an effort to be transparent with our readers and ourselves, members of the Vermont Cynic completed a 17 question demographics survey curated by Cynic editors.

The survey included questions on ability, gender, pronouns, race, religion and sexuality because our newsroom tells stories of the UVM community members who encompass these identities.

The survey was anonymous to encourage the respondents to answer all of the questions truthfully.

We received 82 responses, though we removed one response from our results because the staff member did not take the survey seriously.

The questions on gender, race, pronouns and sexuality were open-ended because not every identity can fit into a check-box created by another person.

Overall, the results were not surprising.

The Cynic recognizes Catamount Data is not entirely accurate in its gender breakdown because it only reflects the data of a male or female response.

The Cynic is an extremely white newsroom. The percentage of white staff is 5.6% higher than the recorded 81% of white students on campus, according to Catamount Data. 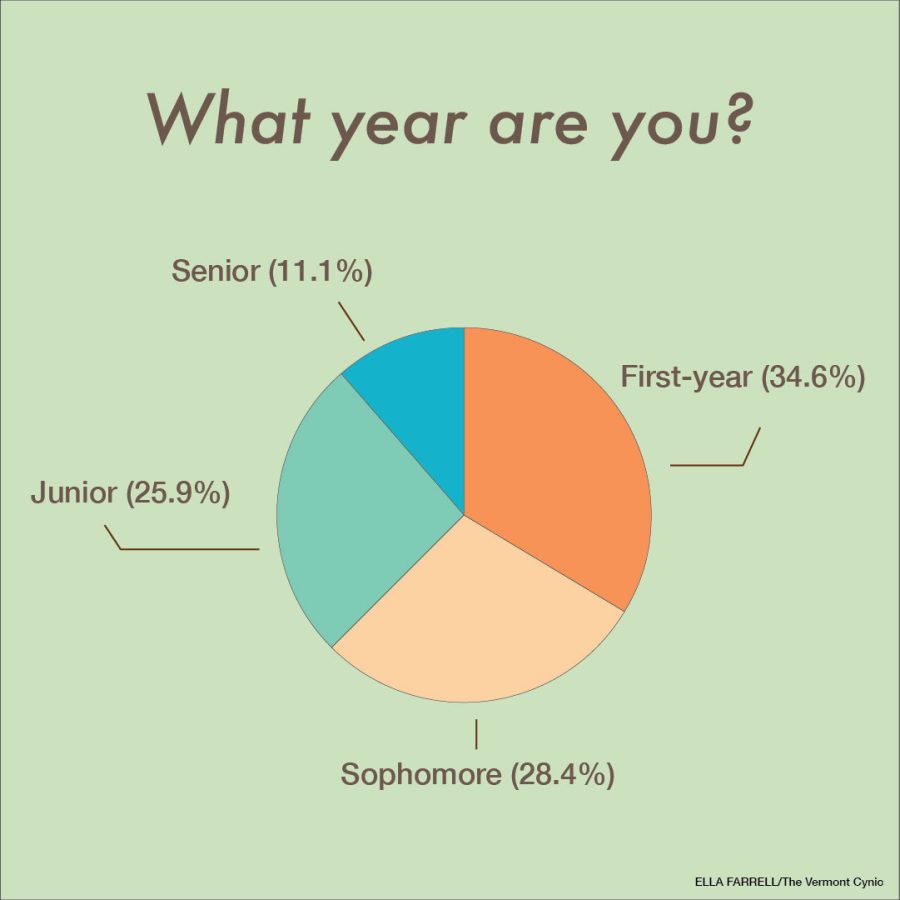 Diversity in newsrooms is a national issue.

Over the past 44 years, the News Leaders Association has conducted an annual survey that shows while there has been progress, the racial diversity of newsrooms does not come close to the fast-growing diversity in the U.S. population as a whole, according to their website.

In 2018, people of color represented 22.6% of the workforce in U.S. newsrooms that responded to the 2018 survey, according to the results.

Though these results cannot be generalized and applied to the entire U.S. journalism industry because the responses were not drawn from a random sample, the results state. The survey has historically relied on a convenience sample from organizations that volunteer to participate.

The project is currently inactive, as participation became spotty, until it was suspended in 2019 after only 293 responses were received, according to an Oct. 14, 2021 Associated Press article.

“Concerns about diversity faded with the industry’s financial collapse over the past two decades,” the article stated.

The Cynic is taking its first step in diversifying our newsroom. The next step is looking at how we currently recruit members and asking what needs to be done differently.

We encourage future executive boards to conduct and publish the Cynic staff survey each year, as well as re-evaluate the questions as needed.

One question that was not included this year but should be next year regards the financial status of our staff members.

The biggest setback for these efforts is the yearly change in leadership, as the editor-in-chief is normally a senior who fills the role for one year. We hope our successors continue to prioritize the effort made by the 2021-22 executive board.

The Cynic’s goal is to be the voice of all students, not just the majority of students.

“Journalism, in its truest form, should be produced for the benefit of all, not only those who wield a particular power, class or authority,” the American Press Institute stated.

True journalism can only happen through a diverse staff who carry different ideas and perspectives. A diverse newsroom will better cover our UVM community.