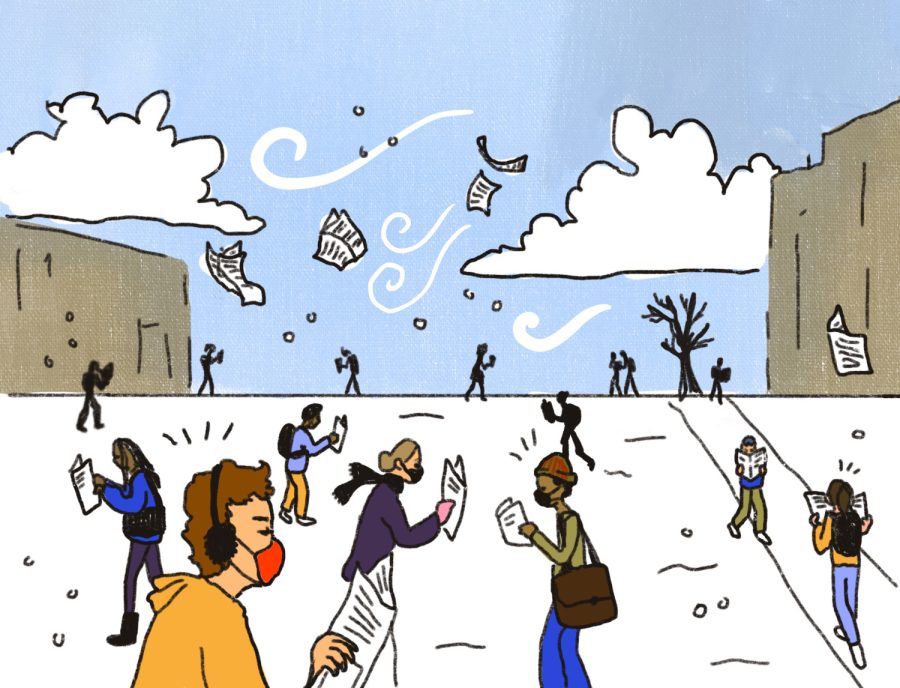 The Cynics are back on the stands

An image of students celebrating the 2020 election results plastered the front page. Biden won, and students were spraying champagne off the roof of their car in celebration. The headline read “DEMOCRACY TRIUMPHS” in all caps.

Three weeks before the election results were announced, before our “final” issue was printed,  Cynic editors sat in the grass outside the Davis Center. I served as layout editor at the time, and I dedicated myself to leading a team in designing the pages for our paper.

COVID-19 was at the forefront of everyone’s minds. Despite coming back to campus for a “normal” semester, people didn’t want to pick up and touch anything they didn’t need to. The newspaper’s circulation was at an all-time low, and a tough call needed to be made.

We needed to stop printing.

I remember fighting back tears and feeling the eyes of the other editors on me. My job fell obsolete.

I chose to move past it. I worked to increase the number of infographics we used in our stories and design better content for our Instagram.

It’s not a secret print is a dying platform.

As the weeks pushed on and we grew further away from our last print issue, I noticed a decline in our work ethic.

The phrase “on deadline” didn’t hold the same respect it used to.

When I became layout editor in 2019, the newsroom pulsed with energy. Sunday deadlines began at 3 p.m. and would sometimes last until 2 a.m.

The door constantly swung open and closed as editors rushed to get final comments from sources, re-take photos that didn’t work and made trips to Brennans to grab fries.

Three or four first-year writers from the news section shoved into a table meant for two people and pressed their ears to their phones as they feverishly transcribed the audios from their interviews.

Editors opened InDesign and held hopeful looks as they pasted their stories onto the page, and an immediate “sigh” followed when the story ran too long or too short.

The clamor of hard work and utter chaos of 15 sleep-deprived college students working to finalize the content from their respective sections before it was too late to send to the printer, filled the Cynic office with so much life.

That feeling evaporated after COVID-19. Editors pushed stories back because they could always upload them to the website the next day. Staff slacked off because the consequence of the paper not making it to the printer was gone.

When I was training to become the new editor-in-chief, I didn’t consider returning to print. It was too hard, none of the current editors had worked through a print deadline and training them seemed too difficult.

Print is expensive. The Cynic requests $18,000 from SGA for printing alone.

Print limits what we can do with a story. So many great pieces of information need to be cut at times to fit the story on the page.

Print makes for rough headlines. When there’s only room for six to seven words, sometimes the ideal headline isn’t the best headline.

There were so many reasons not to print.

Despite all of them, I found myself on the phone with my managing editor during the summer of 2021 telling her I wanted to return to print.

The challenges that arise with print journalism ultimately make us better journalists.

We nailed down a transition plan featuring mock deadlines. We pretended we were printing from Day 1 of fall 2021 and planned for the first print issue to run the last week of the semester.

These pretend deadlines allowed us to iron out all of the kinks in our process. Sometimes an InDesign file didn’t save or stories wouldn’t come in. My managing editor and I would move past it. “We’ll deal with it next time,” we said.

We knew during a real deadline there was no next time. If something didn’t come in, that was a hole on the page that needed to be filled.

After 15 weeks of training, we were ready. Our debut issue was the Sex Issue, a special issue the Cynic began publishing years ago.

Before COVID-19, the print company delivered papers every Tuesday.

Every Tuesday we opened the battered cardboard boxes that made the 286-mile journey from the printing press in Trumbull, CT, to the loading dock of the Davis Center.

The satisfaction of holding a physical copy of the work we spent countless hours on, and the drive to sit down and do it all over again, but better, is unparalleled.

I am so grateful to my staff for working to bring this satisfaction back to current and future Cynics.

It’s been a long process, but Cynics are back on the stands.