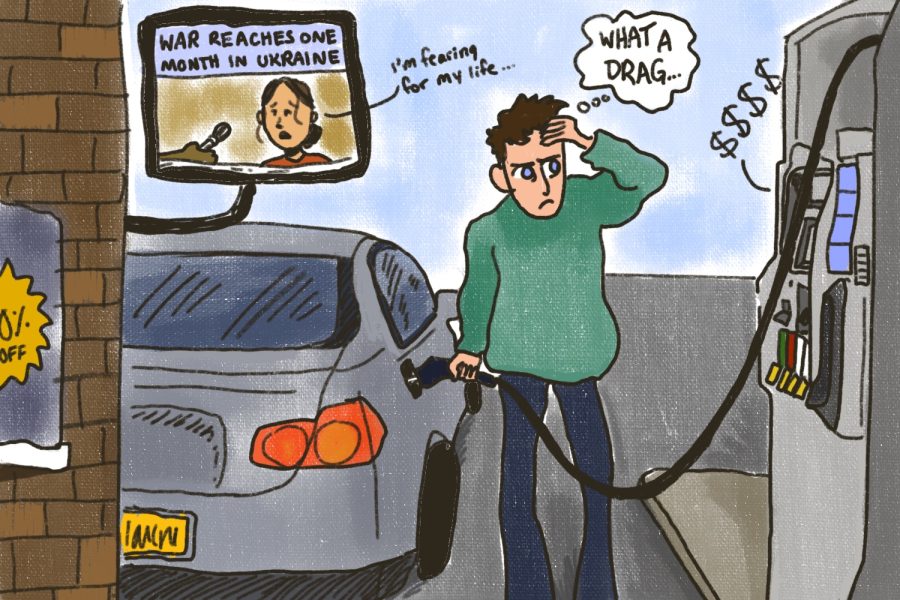 It is a privilege to complain about the economic effect of the Russo-Ukrainian war.

The world is being affected by this, and energy prices are increasing everywhere, but not everyone’s home is being invaded and bombed.

Russia made the decision to conduct a special military operation, or invasion, into Ukraine, according to a Feb. 21 New York Times article. Gas prices have now reached a national average of over $4 a gallon, according to a March 16 Bloomberg article.

The average cost of gas in Burlington is currently around $4.25 a gallon, according to the Burlington Gas Price Index. However, students should stop complaining about this cost and check their privilege.

The costs we face because of this international conflict are incomparable to the costs Ukraine and other nations involved are facing.

The U.S. recently banned Russian oil imports, according to a March 8 White House Press Call. Bans decrease the supply countries buy from, should they avoid Russian oil or gas, driving the price up.

Russia is vital to the global commodity and energy markets, according to a March 2 CNBC article.

Oil and gas companies take advantage of the current crisis and jack up prices for consumers to maintain and increase profits, according to a March 16 Bloomberg article.

As of March 16, the price per barrel of oil was $96, down from a previous high of $120, which leads to an increase in gas prices, according to a March 16 Bloomberg article.

It’s easy to complain about prices, but there is a reason why they are higher.

President Volodymyr Zelenskey of Ukraine addressed Congress and received a standing ovation from members, according to a March 16 CNN recording of the conference.

Republicans and Democrats agreed on the tough economic sanctions on Russia, according to a Feb. 28 New York Times article.

The goal of economic sanctions is for a penalty on the finances of the impacted country, such as Russia, according to an Aug. 7, 2017 PBS article. While the U.S. is also seeing an economic impact, it is not as great.

Economic sanctions then become the alternative to war, we “support” Ukraine by tolerating the increased gas prices, therefore complaining comes off as withdrawing that support.

Gas prices affect everyone who owns a car, and no matter the size, it’s going to be expensive to fill up. But complaining about them while Russia commits war crimes against Ukraine is a privilege.

Here in Burlington, we especially shouldn’t complain because we’re able to walk places rather than drive. UVM students have alternatives to buying gas.

If we are to support Ukraine, socially or through economic sanctions, we must tolerate the impacts that war has on the global economy.