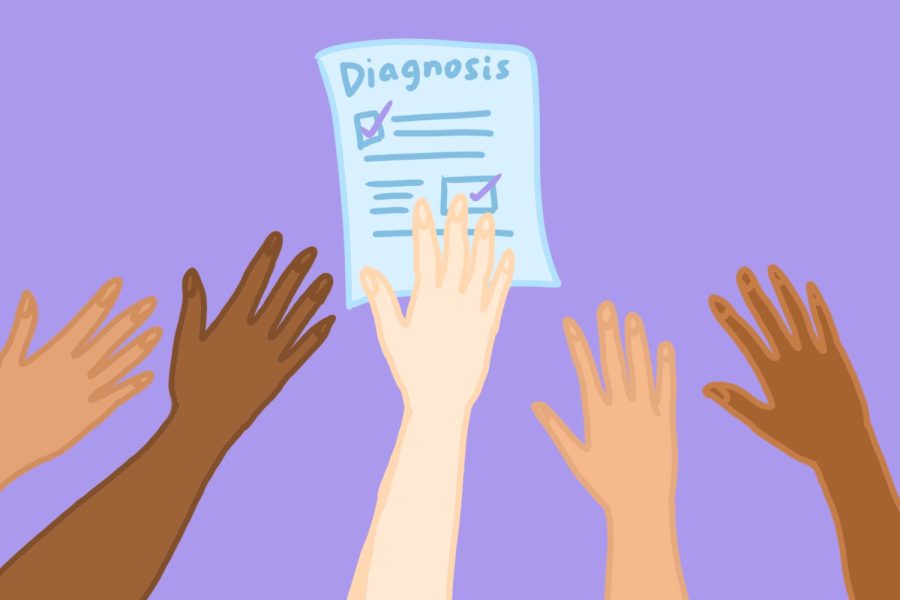 Eating disorders don’t have a color, gender or weight, but in the world of diagnosis and treatment, they are governed by age-old clichés.

Our first mistake is that we have a preconceived notion of what an individual with an eating disorder looks like: thin, female, white and of affluent status.

Our second mistake is believing that individuals who do not fit this model are not “sick enough” or do not qualify for treatment.

Despite the reality that eating disorders directly cause 10,200 deaths per year, medical professionals are reluctant to diagnose and treat certain groups of marginalized individuals, according to the National Association of Anorexia Nervosa and Associated Disorders.

This is unethical and unjust—depriving an individual of the resources to recover adds an additional challenge to the barrier of receiving adequate care.

The criteria for anorexia nervosa includes restriction of energy intake that leads to significantly low weight, coupled with a fear of weight gain or behaviors that prevent weight gain, according to the DSM-5.

In the real world, though, restriction is not limited to those who are underweight and is not always a result of fear of weight gain. Fear of certain foods or textures, desire for control and “saving” for a binge are all equally concerning reasons for restrictive eating.

Additionally, disordered eating behaviors span beyond just restrictive eating. Bulimia nervosa is categorized as frequent binging, or eating large amounts of food in a short time, followed by purging or using dangerous methods such as vomiting or laxative use, according to the DSM-5.

The diagnosis of atypical anorexia, in which individuals exhibit tendencies of anorexia but are not underweight, attempts to be size-inclusive but the “atypical” label is discriminatory in and of itself, as the behavioral characteristics are the same and just as dangerous as normal anorexia.

Larger-bodied individuals often face a delay in diagnosis, misdiagnosis and poor or inappropriate treatment, such as being put on a weight-loss diet, according to the National Eating Disorders Collaboration.

The way someone with an eating disorder looks on the outside is not a reflection of their inner struggles. A person’s outer image is not an invitation to judge their eating behaviors or the state of their physical or mental health.

All in the label

A diagnostic scheme called the Broad Categories for the Diagnosis of Eating Disorders surfaced. It attempts to give individuals a diagnosis even if they do not engage in all behaviors or characteristics of a specific eating disorder.

An eating disorder diagnosis that does not “fit into” the above categories is labeled Eating Disorder Not Otherwise Specified, according to the study.

Though the BCD-ED exists and is used in clinical settings, it is still limited and can cause additional issues in treatment, according to the study.

The issue is not in the lack of a diagnosis—naming the disorder provides some clarification—but clinicians are often taught only the “typical” symptoms, prescribing a robotic method of treatment. The characteristics of an individual’s eating disorder may not completely match the treatment style or recommendations, according to the study.

The importance of individualized medical and psychological treatment cannot be emphasized enough. Lack of proper treatment can make an individual feel isolated in their struggle and further perpetuate the negative thought patterns that accompany eating disorders.

Cue the countless movies romanticizing eating disorders that portray a middle-class, white teenager who grapples with perfectionism and her body. Though this image is constantly depicted in pop culture, it is far from accurate in representing the population of individuals with eating disorders.

Though the media has a tendency to portray eating disorders as the “rich white girl’s problem,” Black teens are 50% more likely to exhibit bulimic behaviors than white teenagers, according to the ANAD.

Fueled by media portrayal, racism and individual opinions of medical professionals, there is a dysfunction in care relating to people of color who have disordered eating behaviors.

White individuals have a significantly higher rate of receiving a diagnosis compared to people of color, according to a March 2, 2018 study from the International Journal of Eating Disorders.

This study, however, grouped all Latine, African American, Asian and students of other races or ethnicities into one large group rather than studying the effects on racial groups separately.

The perpetuation of racism, including racial stereotypes, in the eating disorder treatment system oppresses those in need of help and prevents them from receiving resources that could lead them to recovery of mind and body.

Underrepresentation of men with eating disorders

Males are significantly less likely to perceive their need for, seek and receive treatment than females, according to an Aug. 2019 Mayo Clinic editorial.

Clinicians may not understand the causes and presentation of eating disorders in men due to gender differences, meaning that eating disorders are underdiagnosed and undertreated in men, according to the editorial.

Men are also more likely to enter hospitalization or need emergency department services for eating disorders which could be the result of a more severe condition due to reduced help-seeking, according to the editorial.

In order to have more equal treatment for men with eating disorders, widespread stigmatization is necessary. The solution is simple but not easily executed, as the stigma and stereotypes have been ingrained in the media and treatment programs.

The opportunity to recover should be universal

Every person, no matter what they look like, deserves equal opportunity for treatment. Eating disorders are not restricted to one group, and they have become an increasingly severe issue following the onset of the pandemic.

Though not everyone with an eating disorder fits into an exact diagnosis, delaying diagnosis and treatment permits an individual to further engage in disordered behaviors. It may also reaffirm their idea that they are “not sick enough” and do not need treatment.

There is no such thing as sick enough, thin enough or desperate enough. Every struggle is valid and should be treated as such.

The tragedies caused by eating disorders are all too real and the system should treat them seriously.

Reaching out for help comes from an extremely vulnerable place and individuals should be met where they are at regardless of their race, gender, weight or any other characteristic.

Approaches towards treating eating disorders have evolved, but not enough. The eating disorder treatment approach needs to drag itself out of the past.