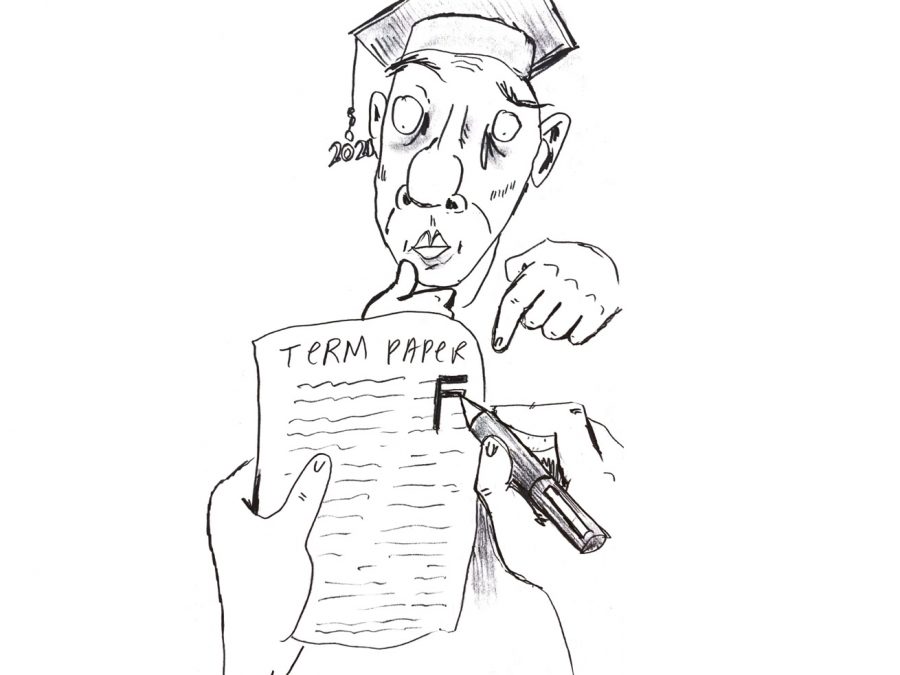 I received a C+ on my first college exam. I cried over it. After getting A’s and B’s in high school, this felt terrible.

I’m obsessed with my grades. UVM’s lack of  consistent grade range encourages my addiction to reloading the screen repeatedly until my grades update.

I can’t help but think, if so many students are hurt by this grading system, then we should not use it at the collegiate level.

I understand that my grades matter much less than learning the content, but thinking rationally is no match for the anxiety that comes with pressing “View Results” on Blackboard.

Obsessing over my grades has compromised my mental health. My motivation towards receiving an A has made me unnecessarily competitive and stressed.

Instead of learning content, I’ve learned how to do well in school. I’ve also learned that I hate the traditional grading system.

I prefer student evaluation of their effort and persistence rather than of their testing ability.

The alternative option can be found at Hampshire College.

Hampshire has implemented a system of evaluations which give students detailed reports about their success in a class, according to the college’s Academic Philosophy webpage

The narrative evaluation system eliminates competition and allows students to receive meaningful yet constructive feedback, according to the webpage.

Hampshire college is a lot smaller than UVM, but it serves as a case study of this system working.

In 2020, UVM’s total undergraduate enrollment was 11,136 and Hampshires was 522, according to a U.S. News and World Report article.

I define my worth as a student by those five letters, A-F And I know I’m probably not the only one.

Additionally, students with merit scholarships are in danger of losing necessary financial aid if they do not keep a certain GPA.

For the 2018-2019 school year, 79% of incoming students were offered merit scholarships, according to UVM’s Prospective Undergraduate Scholarship webpage.

With such a significant number of the student body impacted by the stress of exchanging good grades for affordability, UVM should not be so cavalier about their grading.

If I was able to understand what made me successful, or unsuccessful, I would be significantly more focused on learning rather than competing.

UVM would need to provide professors the necessary resources to effectively give narrative evaluations, including increasing their salaries in order to account for the extra time they would spend grading.

A rework of the system is worth it because narrative grading will motivate both faculty and students to create meaningful work.

Changing the grading system at UVM would be extremely difficult due to the workload for the professors.

Important changes to institutions are never easy, but that doesn’t make them any less necessary for the wellbeing of students.

I want to see UVM become a more collaborative and less competitive university. I believe the way to do this is through narrative evaluation grading.

Get rid of the A-F scale and replace it with something more purposeful.