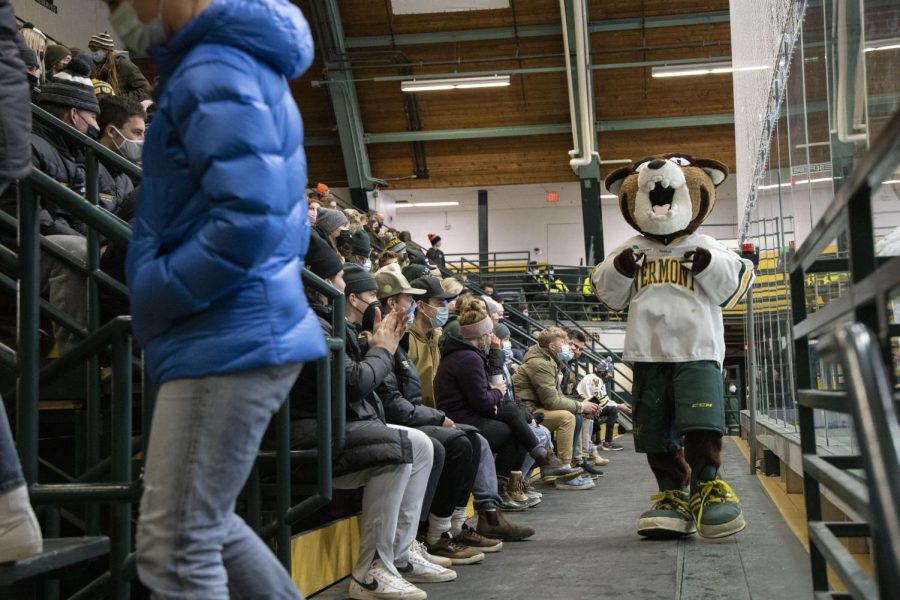 1,240 fans cheered on women’s hockey at the revived Pack the Gut Challenge

The Pack the Gut Challenge returned to Gutterson Fieldhouse on Jan. 21 after a one-year hiatus due to COVID-19.

The event was UVM’s eighth annual attempt to break the Hockey East women’s attendance record of 2,136 spectators, set at the 2017 Pack the Gut Challenge, according to UVM athletics. This year the  proceeds collected at Pack the Gut were donated to Kayla’s Directory, an organization that provides opportunities and resources to children with special needs, according to Olivia Mueller director of Marketing and Fan Engagement for UVM Athletics. The presenting sponsor from this year’s Pack the Gut was The Windjammer, according to Mueller.

This year, 1,240 fans witnessed the Catamounts’ 3-1 victory over Providence College, according to UVM athletics. Graduate forward and captain Kristina Shanahan, who scored the game’s opening goal, said she and her team appreciated the fan support.

“Yeah, it’s huge,” Shanahan said. “We love playing every Pack the Gut. Unfortunately last year we couldn’t have that, but especially with how well our team is doing now, we want to rally the Vermont community and we want people to come see our games.”

Pack the Gut is the brainchild of Danielle Rancourt ‘14, who played forward for UVM. Rancourt volunteered with Burlington Meals on Wheels in the summer of 2013 and learned the organization’s budget would be reduced.

“Days later, I found myself walking down the empty bleachers of Gutterson Fieldhouse, thinking to myself ‘How great would it be to fill the Gut for a women’s hockey game AND raise money for charity?’” Rancourt stated in a May 22, 2020 UVM athletics article.

The Pack the Gut challenge was born, and on Nov. 8, 2013, a record 2,028 fans filled Gutterson Fieldhouse to raise money for Meals on Wheels and see Vermont take on Boston College, according to UVM athletics.

The feeling of the first Pack the Gut was magical, Plumer said.

“To get in there and have the energy the fans bring, it’s a really cool thing that we don’t get to experience as much as I would like in our program,” Plumer said.

On Feb. 3, 2017, UVM broke the attendance record again when a crowd of 2,136 watched Vermont’s 3-3 tie with the University of New Hampshire, according to UVM athletics.

Plumer could not attend Friday’s game since he and most of his staff were in isolation in accordance with the NCAA’s COVID-19 protocols, but said he was pleased with the crowd.

“I think when you get 1,000 people in there it moves the needle on the energy meter and it was a really meaningful game,” Plumer said.

Plumer hopes fans continue to attend games in large numbers for the rest of the season, he said.

“If people like hockey, they’ll love to watch this team,” Plumer said. “I think we play an exciting style. We play fast, we have a lot of highly skilled players and we move the puck really well.”

Vermont’s next home game is Jan. 30 against New Hampshire.