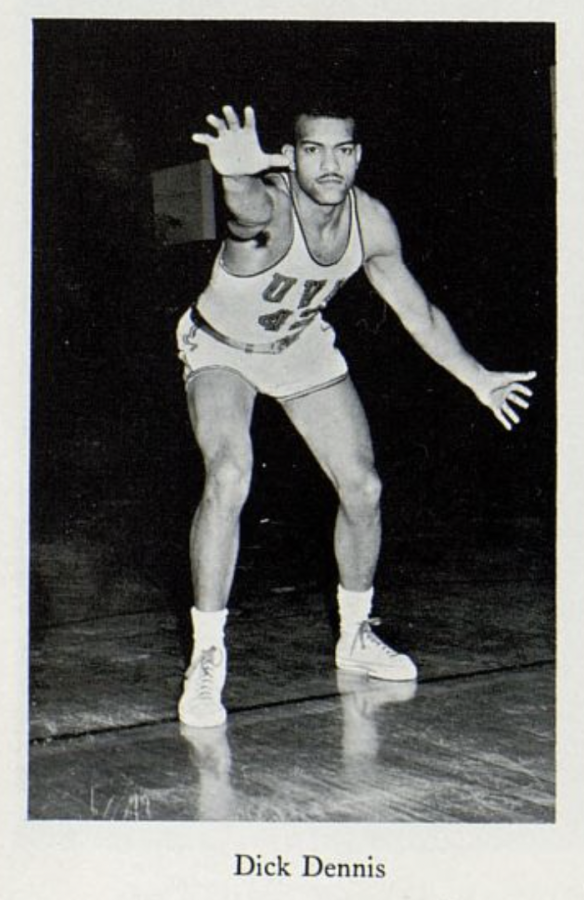 Richard Dennis ‘57 made history at UVM during his time as an undergraduate, athlete and long after as a member of the board of trustees.

Dennis, a native of Summit, New Jersey, was one of few Black students at UVM when he arrived in 1953. He participated in varsity football, basketball and track and majored in political science, according to the UVM website.

In 1954, the fraternity decided to wear purple makeup instead of blackface at Kake Walk because of its two Black members, according to a Feb. 25, 1954 Cynic article.

As an act of protest, Dennis did not participate in any part of Kake Walk except for the weekend’s basketball game, according to the Free Press article.

Dennis played defensive end on the football team and was a key bench player for the 1956-57 men’s basketball team, which earned a 15-5 record, according to the 1957 UVM yearbook.

The 1955 UVM football yearbook stated he was an outstanding student.

After graduation, Dennis taught at Orange High School in New Jersey while pursuing a master’s degree at Montclair State University. He joined Bell Telephone Laboratories in 1964 and became one of the first Black executives at the company, according to his obituary

Dennis joined the UVM board of trustees in 1992. He later became the first Black chair of the board. Dennis retired from the board in 1998.

“Richard Dennis has offered his tireless service, good humor and strong commitment to justice and fairness to the board through his distinguished leadership as Chair of the board, Vice Chair of the Investment Committee, and by his membership on the Student Activities committee,” stated a Feb. 7, 1998 board resolution.

Dennis died in 2005 at age 70. After his death, family and friends established the Richard A. Dennis Green and Gold Professorship in his honor, according to the UVM website.

The Provost assigns the professorship, which recruits or retains a professor who embodies the ideals exemplified by Dennis’ life,  according to the UVM website.

Professor Major Jackson, who left UVM at the end of 2020, held the professorship most recently.