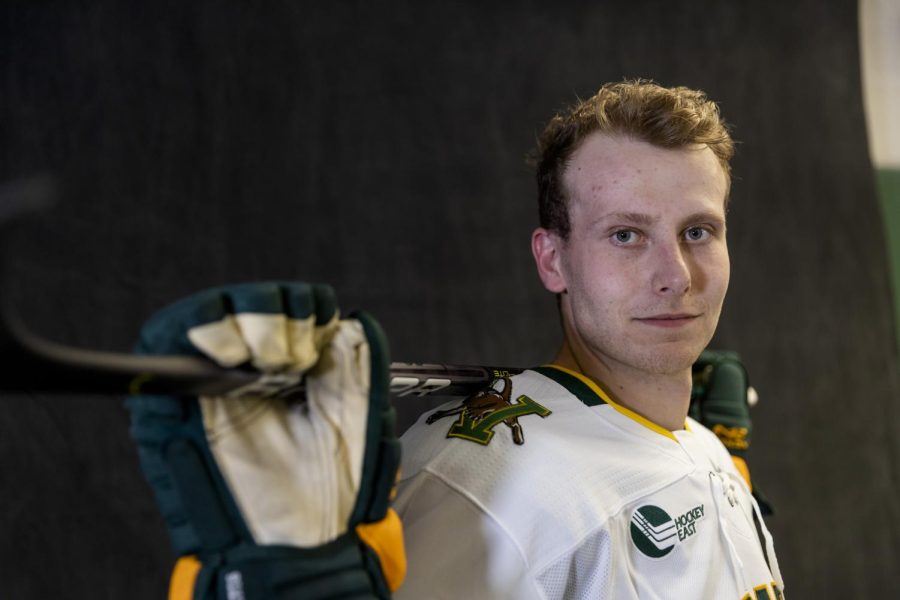 Lagunov played at UMass from 2017-21 during their rise from the bottom of Hockey East to a national championship, according to Hockey East. He entered the transfer portal after graduating from UMass and said he was looking for a change of scenery to challenge himself as an athlete.

“It was pretty natural ending my chapter at UMass, having been able to graduate,” he said. “I had a really good conversation with Woody [UVM men’s hockey head coach Todd Woodcroft] and I thought it was a great opportunity for me to see what I’ve got at a fresh place.”

Now Lagunov joins a UVM team attempting a similar rise. While Vermont has not finished above sixth in Hockey East since 2016-17, Lagunov said he sees similarities between the Catamounts and the UMass roster that went 17-20-2 in 2017.

“Here  at UVM, we’re basically where I was my freshman year at UMass,” Lagunov said. “I think the biggest resemblance is having the large freshmen classes coming in with the new coaching staff.”

Lagunov feels UMass head coach Greg Carvel and Vermont head coach Todd Woodcroft are similar, as they both set a professional tone for the players, he said.

“It’s that attention to detail every day and in the professional approach that we get at the rink,” Lagunov said. “We were getting treated like pros, and you’re expected to perform every single day.”

Lagunov learned from senior players at UMass that the most effective style of leadership is leading by example, he said.

He has tried to apply that lesson as a veteran on a roster with 10 first-years and six sophomores.

“I think for me the biggest thing is work ethic and having that idea of ‘No days off,’” Lagunov said. “No matter what day it is, what we’re doing, it’s 100% dedication and commitment to what we’re doing in the task at hand.”

Lagunov leads the Catamounts with seven goals and 13 points, including an overtime goal to defeat No. 9 Boston College on Oct. 29, 2021.

He said his veteran role was made easier by the abundance of other leaders on the roster.

“There’s the core leader group with the captains, Lagunov said. “One guy I should mention, too, is [senior defenseman] Joe Leahy. He’s done an incredible job. [Junior defenseman Andrew] Lucas has been a great guy and a great leader to a lot of the younger guys.”

As his final season winds down, Lagunov said he hopes to inspire confidence in the young UVM team so they can find success after he departs.

“I do really believe in every single kid in this room,” Lagunov said. “I know this season has had its ebbs and flows, but I want to make sure that they understand that’s part of the process.”